Florida is the third-most populous state in the United States. Its residents include people from a wide variety of ethnic, racial, national and religious backgrounds. The state has attracted immigrants, particularly from Latin America. [3] Florida's majority ethnic group are European Americans, with approximately 65% of the population identifying as White. National ethnic communities in the state include Cubans, who migrated en masse following the revolution in mid-century. They have been joined by other immigrants from Latin America, and Spanish is spoken by more than 20% of the state's population, with high usage especially in the Miami-Dade County area. 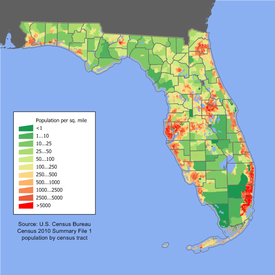 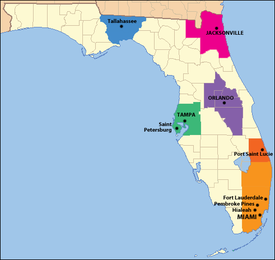 According to the 2010 census, the racial distributions are as follows; 77.3% White (53.5% Non-Hispanic White), 16.9% African American (includes Afro-Caribbeans), 2.9% Asian American, and 0.5% Native American. 25.6% of the population are Hispanics or Latino (of any race). Florida has one of the largest African-American populations in the country, and has the second-highest Latino population on the East Coast outside of New York state. Its ethnic Asian population has grown rapidly since the late 1990s; the majority are Filipinos, Vietnamese, ethnic Chinese who settled in the Gulf Coast. The state has some federally recognized American Indian tribes, such as the Seminoles in the southeastern part of the state. [6]

As in other Deep South states settled largely in the 19th century, the vast majority have British Isles ancestry. [7]

Note: Prior to 2016, births in the table exceed 100% because some Hispanics were counted both by their ethnicity and by their race, giving a higher overall number. Since 2016, data for births of White Hispanic origin are not collected, but included in one "Hispanic" group; persons of Hispanic origin may be of any race.

Florida's public education system identified more than 200 first languages other than English spoken in the homes of students. [15] In 1990, the League of United Latin American Citizens (LULAC) settled a class action lawsuit against the state Florida Department of Education with a consent decree that required educators to be trained in teaching English for Speakers of Other Languages (ESOL). [16]

Article II, Section 9, of the Florida Constitution provides that "English is the official language of the State of Florida." This provision was adopted in 1988 by a vote following an Initiative Petition.

A Miami accent has developed among persons born and/or raised in and around Miami-Dade County and a few other parts of South Florida. [17] It is more prominent among Hispanics (especially Cuban Americans and other Latino groups, influenced by the Spanish language). [18] [19]

Florida residents identify as mostly of various Protestant groups. Roman Catholics make up the single largest denomination in the state. Florida residents' current religious affiliations are shown in the table below: [20]