Maitland is a suburban city in Orange County, Florida, United States, part of the Greater Orlando area. The population was 15,751 at the 2010 census. [5] The area's history is exhibited at the Maitland Historical Museum. The city also hosts the Maitland Art Center, and examples of Mayan Revival architecture and Fantasy Architecture, the Maitland Telephone Museum and the William H. Waterhouse House Museum. A SunRail station is located in Maitland on Highway 17-92. The city is named for Fort Maitland.

Maitland is one of the oldest incorporated suburban municipalities in central Florida. The area was previously inhabited by Timucuan Native Americans. The town was originally named for a nearby Lake, which honored Captain William Seton Maitland, who fought in the Second Seminole Indian War, and was slain in the battle of Wahoo Swamp. A small military outpost was built in 1838 on the western shore of Lake Fumecheliga (later Lake Maitland) during the Second Seminole War. After the Civil War, new residents arrived in the area. Christopher Columbus Beasley, perhaps the first permanent settler, arrived at Lake Maitland in 1871. A post office opened on January 2 of the next year and operated in his home. [6] Around this post office, a small town grew. In the closing decades of the nineteenth century the area was put into extensive citrus production. [7]

Lake Maitland was incorporated as a town in 1885, the third such town in Orange County to do so. In its infancy, Lake Maitland was often characterized as a rural village, with streets lined with large oak trees planted by early town aldermen. However, the old town began to rapidly modernize as Orlando's suburban sprawl reached the town in the mid 1920s. 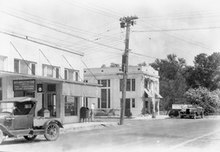 During this period the town grew rapidly as new houses and roads were built. In 1959, Maitland was incorporated as a city.

Maitland is a suburb of Orlando. The town's "historical corridor" encompasses old residences still standing and occupied in the Lake Lily-Lake Catherine area and extending through the central portion of the city. Examples of these century-old structures include "The Church of the Good Shepherd" (1883); " William H. Waterhouse House" (1884), and the " Maitland Art Center" (1937) . [7] The area has always been a vacation spot because of its climate, location to theme parks and people. Maitland has many picturesque parks along lakes, which attract many boaters.

Maitland is peppered with a number of lakes, including "Lake Lily" pictured here.

Worldwide Brands has its headquarters in Maitland. [13]

Other local employers include:

SunRail, the regional commuter rail service, operates a passenger rail station in Maitland. The first 31-mile (50 km) segment of the system (between DeBary and Sand Lake Road in Orange County) began operations on May 1, 2014.

Maitland is home to the nationally recognized and Central Florida's only full-time independent movie theater, Enzian Theater, in turn home to the Florida Film Festival. Maitland is also home to the Art & History Museums – Maitland, including the Maitland Art Center (formerly the Research Studio, 1937), which is a designated a National Historic Landmark (2014) for its unique Mayan Revival and Fantasy Architecture; the Maitland Historical Museum; the Maitland Telephone Museum; the William H. Waterhouse House Museum, also listed on the National Register of Historic Places ; and the Carpentry Shop Museum. Maitland is also home to The Roth Family Jewish Community Center of Greater Orlando, which serves as the center of Jewish life in Orlando and welcomes people of all backgrounds. [15]

Institutions of higher education include: