After Florida became a territory of the United States in 1821, pioneer and immigrant settlers from the United States formed their own settlement adjacent to a Seminole village called Alligator Village, and called it Alligator. [4] Following the 1823 Treaty of Moultrie Creek, the residents of Alligator village relocated to the banks of Peace Creek in the newly established Seminole reservation, leaving Alligator Town on its own.

When Columbia County was formed in 1832 from Duval and Alachua counties, Alligator Town was designated as the seat of the county government. It was renamed as Columbia, the poetic form for the United States. [5] The county was developed for agriculture and the timber industry, with products such as turpentine, lumber, and plywood. From 1832 to 1839, the county seat was Newnansville, but that town and area were returned to Alachua County.

In November 1858 a railroad was completed connecting Jacksonville to Alligator, which opened the town to more commerce and passenger traffic. Alligator Town was incorporated and its name changed to Lake City in 1859; M. Whit Smith was elected as the town's first mayor. [6] According to an urban legend, the name was changed because the mayor's wife Martha Jane, who had recently moved to the town, refused to hang her lace curtains in a town named Alligator. [7]

During the American Civil War, the railroad between Lake City and Jacksonville was used to send beef and salt to Confederate soldiers. In February 1864 Union troops under Truman Seymour advanced west from Jacksonville. His objective was to disrupt Confederate supplies, and obtain African-American recruits and supplies. [8] Confederate General Joseph Finnegan assembled troops and called for reinforcements from P. G. T. Beauregard in response to the Union threat. On February 11, 1864, Finnegan's troops defeated a Union cavalry raid in Lake City. [8] After the Union cavalry was repulsed, Finnegan moved his forces to Olustee Station about ten miles east of Lake City. The Confederate presence at Olustee Station was reinforced to prepare for the Union troops coming from Jacksonville.

Union forces engaged the Confederates at the Battle of Olustee on February 20, 1864 near the Olustee Station. It was the only major battle in Florida during the war. Union casualties were 1,861 men killed, wounded or missing; Confederate casualties were 946 killed, wounded or missing. The Confederate dead were buried in Lake City. [9] In 1928 a memorial for the Battle of Olustee was established in downtown Lake City.

In 1874 Lake City's first newspaper was published in 1874, called the Lake City Reporter. In 1876 the Bigelow Building was completed; it later was adapted for use as the City Hall. The first fire department was established in 1883 to complement the police department. In 1891 Lake City became the first city in Florida to have electric lights from a local power and light company.

White violence rose against blacks in the late 19th century in a regionwide effort to establish and maintain white supremacy as Southern states disenfranchised most blacks and imposed Jim Crow. Whites lynched 20 African Americans in Columbia County from 1877-1950, mostly in the decades near the turn of the 20th century. It was tied with Polk County for the second-highest total of lynchings of any county in the state. [10]

Among these murders was the mass lynching on May 21, 1911, of six black men who were taken from the jail by a white mob in Lake City. They were being held on charges of murdering one white sawmill worker and wounding another in Leon County, after whites had attacked them at a private house following an earlier altercation between two men. [11] A group of a dozen white men, reportedly from Tallahassee, tricked the white youth guarding the jail by posing as officials and gained release of the suspects. They took the men outside town and shot them repeatedly to death. [12] [11] 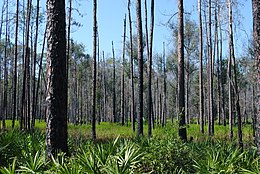 According to the Secretary of State's office, Democrats maintain a narrow plurality among registered voters in Columbia County.

Columbia County has at least three existing railroad lines. The primary one is a Florida Gulf & Atlantic Railroad line formerly owned by CSX, Seaboard System Railroad, Seaboard Coastline Industries and Seaboard Air Line Railroad that served Amtrak's Sunset Limited until it was truncated to New Orleans in 2005 by Hurricane Katrina. Lake City (Amtrak station) was Columbia County's only active railroad station until that point. Another one is owned by the Georgia Southern and Florida Railway, and runs along US 41 from Lake City through Hamilton County. A third line runs along SR 100 into Union County.