Bay County is included in the Panama City, Florida Metropolitan Statistical Area. The county is best known for its white sand beaches and emerald green water, where large pods of dolphins swim year-round. These beaches attract hundreds of thousands of visitors from all over the world each year.

On February 12, 1913, representatives from five towns on St. Andrews Bay met in Panama City to select a name for a proposed new county. The name Bay was selected because it was satisfactory to the majority of the citizens and descriptive of the territory that would be included. On July 1, 1913, the Legislature created Bay County from portions of Washington, Calhoun and Walton counties.

Panama City was where Gideon v. Wainwright, a 1963 US Supreme Court decision that gave all persons accused of a crime the right to an attorney, originated.

Hurricane Michael made landfall near Panama City in Bay County on October 10, 2018, as one of the strongest and most destructive hurricanes in American history, destroying a large part of the county, including many structures in Mexico Beach and Panama City.

According to the Secretary of State's office, Republicans are a majority of the registered voters in Bay County.

Bay District Schools operates public schools serving all portions of the county except Mexico Beach, which is served by Gulf County Schools. [14] [15] [16]

The Northwest Florida Beaches International Airport opened for commercial flights in 2010. It connects the region to several major airports in the South and Midwest.

Bay County is part of the Northwest Regional Library System [18] (NWRLS), which serves Gulf and Liberty Counties as well. 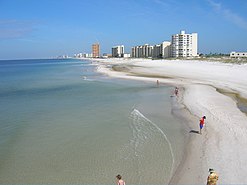