Cape Coral history began in 1957 when two brothers from Baltimore, Maryland, Leonard and Jack Rosen, flew over the peninsula known as Redfish Point, across the Caloosahatchee River near present-day Fort Myers. Cape Coral was founded as Redfish Point. Leonard and Jack Rosen, who were real-estate developers and a small group of partners, purchased a 103-square-mile (270 km2) tract known as Redfish Point for $678,000 in that year and, in 1958, began development of the city as a master-planned, pre-planned community.

The Gulf American Land Corporation (GALC), was formed to develop the area. GAC developed a marketing model that was a total departure from traditional selling methods. Approval was secured from the Lee County to master-plan the entire property into lots. Instead of listing the lots with real estate agents, GAC developed the land-sales, dinner-party model, operating from banquet rooms in local hotels. People were invited to attend by offering a free dinner for two. The model, referred to as team-selling, allowed for a well-trained team to close deals in 90 minutes. Buyers would sign a contract and agree to come to the property within six months and cancel if not satisfied. Ezio Valentini, an Italian real estate developer, joined GAC and became Director of Sales. The program was so successful that offices were opened in 24 states and an arrangement was made with an airline to charter flights to fly buyers to the property.

Instead of borrowing from banks and lenders, the developers factored the sales contracts to pay for building the infrastructure. Canals were dug, streets paved, houses and businesses built. [7] Cape Coral was promoted like no other Florida development. Celebrities were brought in to tout the benefits of "the Cape", as it is known locally. The first building in Cape Coral was the Rosens' sales office. It was built where George's Auto now stands, at Cape Coral and Coronado Pkwys. [8] Cape Coral's first permanent resident was Kenny Schwartz, the Rosens' general manager. [9] Cape Coral's first four homes were completed in May 1958, on Riverside and Flamingo Drives. [10]

Development continued through the early 1960s, mostly on Redfish Point, south of Cape Coral Parkway. By 1963, the population was 2,850; 1,300 buildings had been finished or were under construction; 80 mi (130 km) of road had been built, and 160 mi (260 km) of canals had been dug.[ citation needed] The public yacht club, a golf course, medical clinic and shopping center were up and running. A major addition for Cape Coral was the construction of the 3,400 feet (1,000 m) long Cape Coral Bridge across the Caloosahatchee River, which opened in early 1964. Before the bridge, a trip to Fort Myers was more than 20 mi (32 km) via Del Prado Boulevard and over the Edison Bridge to cross the river.

The city has over 400 miles (640 km) of canals. [8] Most of the canals are navigable and some have access to the Gulf of Mexico. Cape Coral's canal system is so extensive that local ecology and tides have been affected. [16]

The city features a borderline tropical savanna climate ( Köppen climate classification: Aw), bordering on a tropical monsoon climate ( Köppen climate classification: Am)The area averages 355 days of sunshine each year, but experiences precipitation on 145 days per year. While the summers are very warm, humid, and rainy, the winters in Cape Coral are dry with moderate temperatures. The city receives about 56 inches of rain each year, the majority of which falls from June to September. During the summer months, afternoon rains are heavy yet brief. The city is affected by the annual hurricane season, which begins officially on June 1 and continues through November. [17]

As of 2018 [update], Cape Coral is the eighth largest city in Florida by population. More than 60 percent of the population is between the ages of 15–64 and residents under 25 outnumber residents over 65. Southwest Florida's 18–24 age group is growing at a faster rate than the state of Florida and the United States. [21] 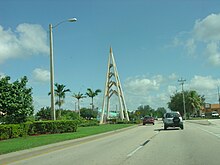 Interstate 75 passes within 10 miles (16 km) of Cape Coral and connects northward to Tampa; and southeastward to Miami/Fort Lauderdale. Cape Coral borders on U.S. Highway 41. U.S. 41 and I-75 can be accessed from State Route 78 (Pine Island Road). Within the city a network of arterial roadways are established. Cape Coral has approximately 1,100 miles (1,800 km) of roadways. In general, the north/south routes are evenly spaced apart every one or two miles (3 km) and most of them have at least four lanes. 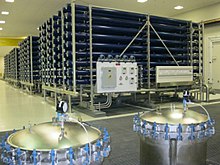 The City of Cape Coral operates water and sewer systems for the city. Sewage is collected and highly treated to produce reclaimed water, locally known as "rescued water". Reclaimed water is distributed throughout the city through a dual water pipe system, and used for irrigation. Alternatively, reclaimed water can be discharged into the Caloosahatchee River.

The Cape was among the first in Florida to deploy the new 4.9 GHz pre-WiMax wireless channel authorized by the FCC in 2003 for exclusive Public Safety use. [28]

One of Florida's youngest state universities, Florida Gulf Coast University (FGCU), opened in 1997 in nearby Fort Myers and now serves more than 12,000 students. FGCU has established a Cape Coral satellite facility, which provides Cape students with a growing offering of core courses. The university offers undergraduate, graduate, and doctoral degrees, including an executive master's program, a college of business and engineering and biotechnology programs.

Other colleges and universities serving the area are Hodges University, Southwest Florida College and Rasmussen College.

Cape Coral is also home to the Cape Coral Technical College, [32] a postsecondary educational institution operated by the Lee County public school system. It provides training in medical, computer and food-science fields. Employer-specific training, both on and off-site, is available through Business and Industry Services of Lee County which maintains an office in Cape Coral. [33]

Cape Coral is home to the SunSplash Water Park, a 14-acre water park which includes water slides, tubing, and more.

The city's only beach features a sandy beach and fishing pier on the Caloosahatchee River at the public Yacht Basin & Club. Although the City only has one beach, Cape Coral offers a variety of Gulf beaches within 15 miles, such as Sanibel Island and Fort Myers Beach.

Cape Coral has over 30 recreational parks which includes playgrounds, open fields, pavilions, workout equipment, walking paths, and much more. The city is also home to 7 golf courses in which some include a shooting range and golf lessons.

The area is known by birding enthusiasts for a wide variety of wildlife and the largest population of burrowing owls in the state of Florida.

Cape Coral's cultural assets include the Historical Museum, the Art Studio, the Cape Coral Art League, and the Cultural Park Theater, a 187-seat performing arts facility that serves as home to community actors. In addition, there are several regional arts and performance venues in the immediate area, including the Barbara B. Mann Performing Arts Hall.

The Southwest Florida Military Museum located in downtown Cape Coral, features a wide collection of military artifacts from all points of the United States 244 year history.

Cape Coral is home to three invasive species, the green iguana, the spiny-tailed iguana, and the Nile monitor, which was discovered in 2009. The iguanas are found throughout southern Florida and generally do not pose a threat. The Nile monitor is however a large (3–7 feet), fast traveling, fast swimming, carnivore with a wide diet, which can include fish, fowl, and small mammals. The city's many waterways work against its capture and provide an easy transportation route around the city. [39]