From Wikipedia, the free encyclopedia
Region in Florida
Not to be confused with Central Florida. 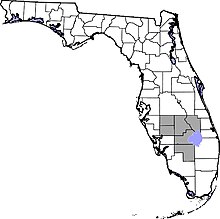 Map of the Florida Heartland

The region is primarily rural in nature, with the primary economic driver being agriculture. Important products grown in this area include tomatoes, beef, sugarcane, cucumbers and citrus products including oranges.
In Hardee county, phosphate mining is also a substantial industry, particularly along the Peace River basin.

As of the 2000 United States Census, there were 229,209 people living in the Florida Heartland.

Each of the six counties has its own school board, with four of the county school systems consisting of one high school, one alternative school and no more than two middle schools. Highlands County has three high schools while Hendry County has two.

The six school districts are all members of the Heartland Educational Consortium, located in Lake Placid, Florida. The Consortium is one of three educational consortia in the state, created by state legislature to provide support to small and rural school districts.

South Florida State College, the largest post-secondary institution based within Florida's Heartland, is located in Avon Park and has campuses in Lake Placid, Bowling Green and Arcadia.

Other community colleges that have campuses in the Florida Heartland include the Indian River State College's Dixon Hendry Campus in Okeechobee, and the Fort Myers-based Florida SouthWestern State College with its Hendry/Glades Center in LaBelle.

There is no scheduled airline service in the Florida Heartland. The following General Aviation airports operate in the region:

There are no seaports, as there is neither a seacoast nor navigable rivers, but the Okeechobee Waterway is a navigable canal which crosses the region, connecting the Gulf of Mexico to the Atlantic Ocean through Lake Okeechobee. There is a proposal underway for a potential "Inland Port" to be located in the Florida Heartland. This inland port would be an extension of the Ports of West Palm Beach, Everglades and Miami which lack the current and available real estate to expand their facilities.

Amtrak service operates on CSX tracks, with stops in Sebring and Okeechobee.

Tourism is an economic driver in the area, but far less so than most of the rest of the state. The lack of development and amenities results in fewer tourists visiting the area, and there are no oceanfront beaches to attract nearby residents. The largest tourist attraction is the Sebring International Raceway, southeast of Sebring in Highlands County. There, the 12 Hours of Sebring, an American Le Mans Series race usually held in the second week of March, drew a "paying crowd" of more than 169,000 in 2006. [2] Many seasonal residents live in the area during the winter months only, as temperatures in south Florida stay very moderate during that time of year. Lake Okeechobee and Lake Istokpoga attract fishers to the area.

Area code 863 is used throughout the region.

There are two daily newspapers published in the Heartland, the Okeechobee News (Okeechobee), and Highlands News-Sun (Sebring).

Other daily newspapers that serve the Heartland include:

There are no local television stations in the Florida Heartland. TV service originates in Fort Myers, Miami, Orlando, Tampa, and West Palm Beach.

The following radio stations operate in the Heartland:

WRMI, a Miami-based shortwave radio station, broadcasts from facilities near Okeechobee. The Okeechobee site was previously the longtime home of Family Radio's WYFR from 1977 to 2013.