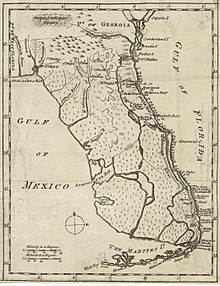 An 18th-century map of Florida

This is a timeline of the U.S. state of Florida.