Port St. Lucie was a largely uninhabited tract of land south of White City in the 1950s, composed of a fishing camp, a few farms and businesses near U.S. 1. In 1958, with a budget of $5, the General Development Corporation (GDC) purchased the River Park development and 40,000 acres (160 km2) along the North Fork of the St. Lucie River. [11] In 1959, the GDC opened its first bridge over the St. Lucie River, allowing for direct automobile access to Port St. Lucie.

By February 25, 1961 there were 250 homes in the new city. GDC requested the state legislature to incorporate 70 miles (110 km), along with the River Park settlement, into the City of Port St. Lucie. River Park did not incorporate into the city at the request of its residents. Port St. Lucie became a city on April 27, 1961 with the passage of House Bill No. 953, proposed by State Representative Rupert Smith and approved by Florida Governor C. Farris Bryant.[ citation needed]

In the early 1990s, Core Communities (CC), acquired and began planning what would become St. Lucie West. Originally, St. Lucie West was to have contained about 14,000 homes over a 20-year period on 7 square miles (18 km2). But after realizing the community's strategic position, they began developing it into more than just a residential area. CC began building business sectors and places of entertainment and leisure. That resulted in 7,000 jobs being brought to the small town, helping it into its boom during most of the early 2000s.[ citation needed]

In 2006, CC started development of its newest community, Tradition. The community, which sits west of the Interstate 95 interchange with Gatlin Blvd., was a large cattle ranch before CC began to develop it. There they built around 13,000,000 square feet (1,200,000 m2) of commercial area, and room for over 18,000 residences. According to CC's website, Tradition is the largest fully entitled residential development area from the tip of Interstate 95 to the Canada–U.S. border. It is modeled after a 1950s-era town. According to its website, Tradition Square, the town center of the community, holds festivities year-round. It was also chosen as the site of HGTV's Green Home 2009, and one of America's best 100 communities.[ citation needed]

In 2007, the housing market began to collapse and unemployment started to rise. As of February 2009, unemployment was at 10½ percent and in 2008, nearly 11,000 homes went into foreclosure. This prompted the county government to consider declaring itself a disaster area. Doing so would have given county administrators access to $17 million in county emergency reserve funds. That money, combined with a transportation fund and other accounts, would give St. Lucie $20 – $30 million to spend on building projects: research parks, highways and other infrastructure improvements. [12]

In 2017, TAMCO, a subsidiary of City Electric Supply, a family-owned electrical wholesale business, created plans with the Port St. Lucie City Council to construct a $38 million, 400,000 square foot manufacturing and distribution center located in the Tradition Commerce Park. [13] Construction of the TAMCO facility began in 2018 and was completed in late 2019. [14]

Port St. Lucie is located in the broad transition zone between a humid subtropical climate, which dominates Central Florida, and within the northern extent of the tropical climate typical of South Florida. Summers are usually hot, with high temperatures averaging in the low 90s. Winters are usually mild to warm, with average high temperatures in the 70s. The average yearly precipitation is around 53.5 in.[ citation needed]

Port St. Lucie is served by the St. Lucie Transportation Planning Organization (TPO). [20] The TPO is a Metropolitan Planning Organization (MPO), a federally mandated and federally funded transportation policy-making organization responsible for transportation planning, programming, and financing of State and Federal Transportation Funds for the City of Port St. Lucie. The TPO is governed by a TPO Board, which is composed of elected officials, representatives from the St. Lucie County School Board, and representatives from Community Transit, a division of The Council on Aging of St. Lucie, Inc. [21] The original bus system started out as a demand response service bus in the 1990s, it only served St. Lucie County. Soon it expanded to a fixed route system, going to predetermined locations along a route. On June 3, 2002, the Florida Department of Transportation (FDOT) approved funding, expanding the bus service to Martin County, and became the Treasure Coast Connector. [22]

Crosstown Parkway, completed in October 2019, is an east/west highway connecting Interstate 95 (State Road 9) with U.S. 1 (State Road 5). Along with being a much-needed high-capacity third crossing of the North Fork of the St. Lucie River ( Port St. Lucie Blvd. to the south, and Prima Vista Blvd. to the north being the other two), it is also the location of Florida's first superstreet intersection — also known as a "restricted-crossing U-turn intersection" — at Crosstown Parkway and Floresta Drive.

U.S. 1 (State Road 5) almost runs parallel to Interstate 95, and runs from Key West to Jacksonville, where it crosses into Georgia at Folkston. Its route through the city extends from the Martin/St. Lucie County line to the south to Midway Road at the northern limits of the city. This stretch of US 1 contains mostly strip malls and shopping centers. On the southeast corner of US 1's intersection with Walton Road/Veterans Memorial Blvd., is the MIDFLORIDA Credit Union Event Center, which was once envisioned as the center of the city's 'downtown'. As of today, the area around the Event Center remains mostly undeveloped. 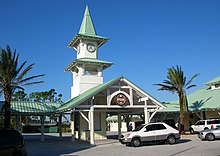 Parts of the James Bond film, Moonraker, was shot in Port St. Lucie on the St. Lucie River. [26]