From Wikipedia, the free encyclopedia
For the historical former county that existed from 1844 to 1855, see St. Lucie County, Florida (1844-1855).
County in Florida, United States
U.S. county in Florida

The area was originally inhabited by the Ais tribe, a hunter-gatherer culture whose territory extended from south of the St. John's river to the St. Lucie Inlet. Spanish explorers frequently encountered the fierce tribe as the Spanish treasure routes ran parallel in order to take advantage of the strong Gulfstream current. The area was given several names by the Spanish including Rio de Ays (later changed to Indian River) as well as Santa Lucia, named after the short-lived late 16th-century Spanish fort that bore its name farther south. The fabled 1715 Spanish treasure fleet sank off the area that is now St. Lucie County, leading to the regional naming of the area as the Treasure Coast.

During the early 19th century, the Spanish government issued several land grants in the area, one of which went to settler James Hutchinson. The grant contained 2,000 acres (8.1 km2) and today the barrier island Hutchinson Island still retains his name. During the mid-1800s, Seminoles and runaway slaves sought refuge in the virtually uninhabited area. By 1837 the Second Seminole war had broken out in Florida. In December 1837, a group of soldiers under the command of Lt. Colonel Benjamin K. Pierce sailed down the Indian River and established a fort, naming it after their commander. Today the county seat of St. Lucie County is still known as Fort Pierce. In 1841, the United States government began issuing land grants under the Armed Occupation Act to Americans who were willing to settle the area. Several of these grants were within the boundaries of today's St. Lucie County. The Third Seminole War in 1851 saw the building of a second major American fort in the area, Fort Capron, located in the area that is today's St. Lucie Village.

From this point on the area became gradually more populated as settlers ventured down for health and economic reasons. The Flagler railroad reached the area in the 1890s. Major industries at the end of the 19th century in the area included pineapple, fishing and seafood canning and cattle. Citrus would not become a major crop until the early 1900s. The city of Fort Pierce was chartered in 1901.

The 1920s saw increased land speculation and planned developments such as Indrio and San Lucie that never came to fruition due to the bust in 1929. During World War II the United States Naval Amphibious Training Base was established in Fort Pierce on North and South Hutchinson Island. During its operation over 140,000 troops were processed through the base. The post-war years saw a major population boom in the area, some of which were returning sailors and their families that had undergone training at the Navy base.

In 1958, the General Development Corporation, a subsidiary of Mackle Brothers, bought tens of thousands of acres of land along the St. Lucie River in the southern part of the county in order to build a new community. Colorful and clever advertising soon drew thousands of northeastern retirees and families to the area, laying the foundation for the future city of Port St. Lucie. Population and building booms in the late 20th century led to the formation of other areas west and south of Port St. Lucie including St. Lucie West and the new master planned community of Tradition. The early 21st century brought many trials for the county including two major hurricanes in 2004 and an economic and housing slump starting in 2008. In 2005, St. Lucie County celebrated its 100th birthday.

St. Lucie County is served by the St. Lucie Transportation Planning Organization (TPO). [4] The TPO is a Metropolitan Planning Organization (MPO), a federally mandated and federally funded transportation policy-making organization responsible for transportation planning, programming, and financing of State and Federal Transportation Funds for St. Lucie County. The TPO is governed by a TPO Board, which is composed of elected officials, representatives from the St. Lucie County School Board, and representatives from Community Transit, a division of The Council on Aging of St. Lucie, Inc. [5] The original bus system started out as a demand response service bus in the 1990s, it only served St. Lucie County. Soon it expanded to a fixed route system, going to predetermined locations along a route. On June 3, 2002, the Florida Department of Transportation (FDOT) approved funding, expanding the bus service to Martin County, and became the Treasure Coast Connector. [6] [7]

Schools in the county are managed by St. Lucie County Public Schools. 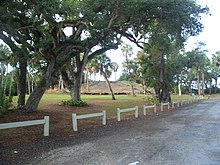