From Wikipedia, the free encyclopedia
The only living New World species of canid that can climb trees
This article is about the fox. For other uses, see Gray fox (disambiguation).

The gray fox (Urocyon cinereoargenteus), or grey fox, is an omnivorous mammal of the family Canidae, widespread throughout North America and Central America. This species and its only congener, the diminutive island fox (Urocyon littoralis) of the California Channel Islands, are the only living members of the genus Urocyon, which is considered to be the most basal of the living canids. Though it was once the most common fox in the eastern United States, and still is found there, human advancement and deforestation allowed the red fox to become more dominant. The Pacific States still have the gray fox as a dominant. It is the only American canid that can climb trees. Its specific epithet cinereoargenteus means " ashen silver".

The gray fox is mainly distinguished from most other canids by its grizzled upper parts, black stripe down its tail and strong neck, while the skull can be easily distinguished from all other North American canids by its widely separated temporal ridges that form a U-shape. There is little sexual dimorphism, save for the females being slightly smaller than males. The gray fox ranges from 76 to 112.5 cm (29.9 to 44.3 in) in total length. The tail measures 27.5 to 44.3 cm (10.8 to 17.4 in) of that length and its hind feet measure 100 to 150 mm (3.9 to 5.9 in). The gray fox typically weighs 3.6 to 7 kg (7.9 to 15.4 lb), though exceptionally can weigh as much as 9 kg (20 lb). [2] [3] [4] It is readily differentiated from the red fox by the obvious lack of "black stockings" that stand out on the latter, a stripe of black hair that runs along the middle of its tail, and individual guard hairs being banded with white, gray, and black. [5] The gray fox displays white on the ears, throat, chest, belly and hind legs. [5] In contrast to all Vulpes and related (Arctic and fennec) foxes, the gray fox has oval (instead of slit-like) pupils. [6] 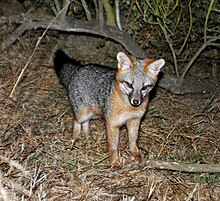 Gray fox kit at the Palo Alto Baylands in California

The gray fox appeared in North America during the mid- Pliocene (Hemphillian land animal age) epoch 3.6 million years ago ( AEO) with the first fossil evidence found at the lower 111 Ranch site, Graham County, Arizona with contemporary mammals like the giant sloth, the elephant-like Cuvieronius, the large-headed llama, and the early small horses of Nannippus and Equus. [7] Genetic analyses of the fox-like canids confirmed that the gray fox is a distinct genus from the red foxes (Vulpes spp.). Genetically, the gray fox often clusters with two other ancient lineages, the east Asian raccoon dog (Nyctereutes procyonoides) and the African bat-eared fox (Otocyon megalotis). [8] The chromosome number is 66 (diploid) with a fundamental number of 70. The autosomes include 31 pairs of sub-graded subacrocentrics, but one only pair of metacentrics. [9] Faunal remains at two northern California cave sites confirm the presence of the gray fox during the late Pleistocene. [10] Genetic analysis has shown that the gray fox migrated into the northeastern United States post-Pleistocene in association with the Medieval Climate Anomaly warming trend. [11] Recent mitochondrial genetic studies suggests divergence of North American eastern and western gray foxes in the Irvingtonian mid-Pleistocene into separate sister taxa. [12]

The gray fox's dwarf relative, the island fox, is likely descended from mainland gray foxes. [13] These foxes apparently were transported by humans to the islands and from island to island, and are descended from a minimum of 3–4 matrilineal founders. [12] The genus Urocyon is considered to be the most basal of the living canids. [14]

The species occurs throughout most rocky, wooded, brushy regions of the southern half of North America from southern Canada ( Manitoba through southeastern Quebec) [15] to the northern part of South America ( Venezuela and Colombia), excluding the mountains of northwestern United States. [16] It is the only canid whose natural range spans both North and South America. [17] In some areas, high population densities exist near brush-covered bluffs. [5] 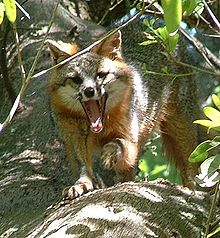 The gray fox's ability to climb trees is shared only with the Asian raccoon dog among canids. Its strong, hooked claws allow it to scramble up trees to escape many predators, such as the domestic dog or the coyote, [18] or to reach tree-bound or arboreal food sources. It can climb branchless, vertical trunks to heights of 18 meters and jump from branch to branch. [19] It descends primarily by jumping from branch to branch, or by descending slowly backwards like a domestic cat. The gray fox is primarily nocturnal or crepuscular and makes its den in hollow trees, stumps or appropriated burrows during the day. Such gray fox tree dens may be located 30 ft above the ground. [6] Prior to European colonization of North America, the red fox was found primarily in boreal forest and the gray fox in deciduous forest. Today, the red fox's ability to adapt to development and urbanization make it dominant in most of the eastern United States. [20]

The gray fox is assumed monogamous. The breeding season of the gray fox varies geographically; in Michigan, the gray fox mates in early March, in Alabama, breeding peaks occur in February. The gestation period lasts approximately 53 days. Litter size ranges from 1 to 7, with a mean of 3.8 young per female. The sexual maturity of females is around 10 months of age. Kits begin to hunt with their parents at the age of 3 months. By the time that they are four months old, the kits will have developed their permanent dentition and can now easily forage on their own. The family group remains together until the autumn, when the young males reach sexual maturity, then they disperse. [9] Out of a study of nine juvenile gray foxes, only the males dispersed up to 84 km. The juvenile females stayed within proximity of the den within 3 km and always returned. [21] On the other hand, adult gray foxes showed no signs of dispersion for either gender. [22]

The annual reproductive cycle of males has been described through epididymal smears and become fertile earlier and remain fertile longer than the fertility of females. [9]

Dens are used at any time during the year but mostly during whelping season. Dens are built in brushy or wooded regions and are less obvious than the dens of the red fox. Logs, trees, rocks, burrows, or abandoned dwellings serve as suitable den sites. [5]

A gray fox at night

The gray fox is an omnivorous, solitary hunter. It frequently preys on the eastern cottontail (Sylvilagus floridanus) in the eastern U.S., though it will readily catch voles, shrews, and birds. In California, the gray fox primarily eats rodents, followed by lagomorphs, e.g. jackrabbit, brush rabbit, etc. [18] In some parts of the Western United States (such as in the Zion National Park in Utah), the gray fox is primarily insectivorous and herbivorous. [23] Fruit is an important component of the diet of the gray fox and they seek whatever fruits are readily available, generally eating more vegetable matter than does the red fox (Vulpes vulpes). [2] 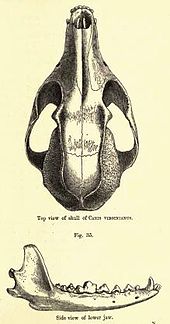 There are 16 subspecies recognized for the gray fox. [9]