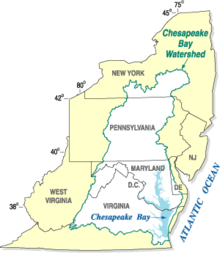 Map of the Chesapeake Bay watershed

In the late 1970s and early 1980s, Congress funded scientific and estuarine research of the Chesapeake Bay, which pinpointed three areas that required immediate attention:

The Environmental Protection Agency (EPA) released a report in September 1983, based on seven years of research on the bay. The report stated that the bay was an "ecosystem in decline" and cited numerous instances of declines in the populations of oysters, crabs, freshwater fish and other wildlife. [1] [2]

In December 1983 the governors of Maryland, Virginia and Pennsylvania; the mayor of the District of Columbia; and the EPA Administrator signed The Chesapeake Bay Agreement of 1983. [3] From this act, the Chesapeake Bay Program Executive Council was formed.

Since the creation of the program, Congress has provided annual appropriations, and the budgets of the Environmental Protection Agency and Department of Agriculture have provided the majority of federal agency funds. Additional significant funding amounts from federal agencies have been provided by the Departments of Defense, Interior and Commerce. Funding has also been provided by the states of Maryland, Virginia, Delaware, New York, Pennsylvania and West Virginia; and the District of Columbia. [7] [8]

Signatories to the Chesapeake Bay Agreement