The fox squirrel (Sciurus niger), also known as the eastern fox squirrel or Bryant's fox squirrel, [2] is the largest species of tree squirrel native to North America. Despite the differences in size and coloration, it is sometimes mistaken for American red squirrels or eastern gray squirrels in areas where the species co-exist. [3]

The squirrel's total body length measures 45 to 70 cm (17.7 to 27.6 in), tail length is 20 to 33 cm (7.9 to 13.0 in), and they range in weight from 500 to 1,000 grams (1.1 to 2.2 lb). [4] There is no sexual dimorphism in size or appearance. Individuals tend to be smaller in the west. There are three distinct geographical phases in coloration: In most areas the animals upper body is brown-grey to brown-yellow with a typically brownish-orange underside, while in eastern regions such as the Appalachians there are more strikingly-patterned dark brown and black squirrels with white bands on the face and tail. In the south can be found isolated communities with uniform black coats. To help with climbing, they have sharp claws, developed extensors of digits and flexors of forearms, and abdominal musculature. [5] Fox squirrels have excellent vision and well-developed senses of hearing and smell. They use scent marking to communicate with other fox squirrels. [5] "Fox squirrels also have several sets of vibrissae, hairs or whiskers that are used as touch receptors to sense the environment. These are found above and below their eyes, on their chin and nose, and on each forearm." [5] The dental formula of S. niger is 1.0.1.31.0.1.3 × 2 = 20 [6]

Fox squirrel foraging in the grass in Indianapolis, Indiana.

The fox squirrel's natural range extends through most of the eastern United States, north into the southern prairie provinces of Canada, and west to the Dakotas, Colorado, and Texas. They are absent (except for vagrants) in New England, New Jersey, most of New York, northern and eastern Pennsylvania, Ontario, Quebec, and the Atlantic provinces of Canada. They have been introduced to both northern and southern California, [7] Oregon, [8] Idaho, [9] Montana, [9] Washington, [9] and New Mexico [9]m as well as Ontario and British Columbia in Canada. While very versatile in their habitat choices, fox squirrels are most often found in forest patches of 40 hectares or less with an open understory, or in urban neighborhoods with trees. They thrive best among oak, hickory, walnut, pecan and pine trees, storing their nuts for winter. Western range extensions in Great Plains regions such as Kansas are associated with riverine corridors of cottonwood. A subspecies native to several eastern US states is the Delmarva fox squirrel (S. n. cinereus). [4]

Fox squirrels are most abundant in open forest stands with little understory vegetation; they are not found in stands with dense undergrowth. Ideal habitat is small stands of large trees interspersed with agricultural land. [10] The size and spacing of pines and oaks are among the important features of fox squirrel habitat. The actual species of pines and oaks themselves may not always be a major consideration in defining fox squirrel habitat. [4] Fox squirrels are often observed foraging on the ground several hundred meters from the nearest woodlot. Fox squirrels also commonly occupy forest edge habitat. [11]

Fox squirrels have two types of shelters: leaf nests ( dreys) and tree dens. They may have two tree cavity homes or a tree cavity and a leaf nest. Tree dens are preferred over leaf nests during the winter and for raising young. When den trees are scarce, leaf nests are used year-round. [12] [13] Leaf nests are built during the summer months in forks of deciduous trees about 30 feet (9 m) above the ground. Fox squirrels use natural cavities and crotches (forked branches of a tree) as tree dens. [12] Den trees in Ohio had an average diameter at breast height (d.b.h.) of 21 inches (53 cm) and were an average of 58.6 yards (53.6 m) from the nearest woodland border. About 88% of den trees in eastern Texas had an average d.b.h. of 12 inches (30 cm) or more. [10] Dens are usually 6 inches (15 cm) wide and 14–16 inches (36–41 cm) inches deep. Den openings are generally circular and about 2.9 to 3.7 inches (7.4 to 9.4 cm). Fox squirrels may make their own den in a hollow tree by cutting through the interior; however, they generally use natural cavities or cavities created by northern flickers (Colaptes auratus) or red-headed woodpeckers (Melanerpes erythrocephalus). Crow nests have also been used by fox squirrels. [13]

Fox squirrels use leaf nests or tree cavities for shelter and litter rearing. [10] Forest stands dominated by mature to over mature trees provide cavities and a sufficient number of sites for leaf nests to meet the cover requirements. Overstory trees with an average d.b.h. of 15 inches (38 cm) or more generally provide adequate cover and reproductive habitat. Optimum tree canopy closure for fox squirrels is from 20% to 60%. Optimum conditions of understory closure occur when the shrub-crown closure is 30% or less. [10]

Fox squirrels are tolerant of human proximity, and even thrive in crowded urban and suburban environments. They exploit human habitations for sources of food and nesting sites, being as happy nesting in an attic as they are in a hollow tree. [14] 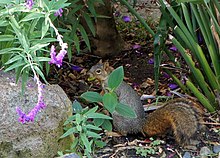 Backyard fox squirrel searching for a location to bury its acorn, in Berkeley, California 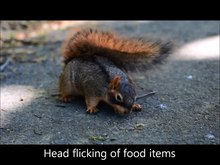 Play media
Manipulation of food items by paws and head 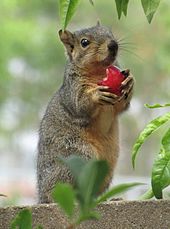 Fox squirrels are strictly diurnal, non-territorial, and spend more of their time on the ground than most other tree squirrels. They are still, however, agile climbers. They construct two types of homes called " dreys", depending on the season. Summer dreys are often little more than platforms of sticks high in the branches of trees, while winter dens are usually hollowed out of tree trunks by a succession of occupants over as many as 30 years. Cohabitation of these dens is not uncommon, particularly among breeding pairs.

Fox squirrels will form caches by burying food items for later consumption. [16] They like to store foods that are shelled and high in fat, such as acorns and nuts. Shelled foods are favored because they are less likely to spoil than non-shelled foods, and fatty foods are valued for their high energy density. [17] [18]

They are not particularly gregarious or playful, in fact they have been described as solitary and asocial creatures, coming together only in breeding season. [19] They have a large vocabulary, consisting most notably of an assortment of clucking and chucking sounds, not unlike some "game" birds, and they warn of approaching threats with distress screams. In the spring and fall, groups of fox squirrels clucking and chucking together can make a small ruckus. They also make high-pitched whines during mating. When threatening another fox squirrel, they will stand upright with their tail over their back and flick it. [5]

They are impressive jumpers, easily spanning fifteen feet in horizontal leaps and free-falling twenty feet or more to a soft landing on a limb or trunk. 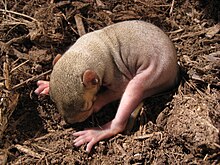 Female fox squirrels come into estrus in mid-December or early January, then again in June. They normally produce two litters a year; however, yearling females may only produce one. [15] Females become sexually mature at 10 to 11 months of age and usually produce their first litter when they are a year old. [15]

Gestation occurs over a period of 44 to 45 days. Earliest litters appear in late January; most births occur in mid-March and July. The average litter size is three, but can vary according to season and food conditions. [15]

Tree cavities, usually those formed by woodpeckers, are remodeled to winter dens and often serve as nurseries for late winter litters. If existing trees lack cavities, leaf nests known as dreys are built by cutting twigs with leaves and weaving them into warm, waterproof shelters. Similar leafy platforms are built for summer litters and are often referred to as "cooling beds." [20]

Tree squirrels develop slowly compared to other rodents. At birth, the young are blind, without fur and helpless. Eyes open at 4 to 5 weeks of age and ears open at 6 weeks. Eastern fox squirrels are weaned between 12 and 14 weeks but may not be self-supporting until 16 weeks. [13] [15] Juveniles usually disperse in September or October, but may den either together or with their mother during their first winter. [12] 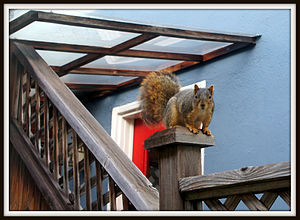 Fox squirrel pausing from building its nest in an attic in Berkeley, California.

In captivity, fox squirrels have been known to live 18 years, but in the wild most fox squirrels die before they become adults. [5] Their maximum life expectancy is typically 12.6 years for females and 8.6 years for males. Because of overhunting and the destruction of mature forests, many subspecies of fox squirrel (the Delmarva fox squirrel for example) are endangered. [5] Another major cause of fox squirrel population decline is mange mite (Cnemidoptes sp.) along with severe winter weather. [15]