From Wikipedia, the free encyclopedia
"Milkweed" redirects here. For other uses, see Milkweed (disambiguation).
Not to be confused with Asclepius.
Genus of flowering plants

Asclepias is a genus of herbaceous, perennial, flowering plants known as milkweeds, named for their latex, a milky substance containing cardiac glycosides termed cardenolides, exuded where cells are damaged. [3] [4] [5] Most species are toxic to humans and many other species, primarily due to the presence of cardenolides, although, as with many such plants, there are species that feed upon them (i.e. leaves) and from them (i.e. nectar). The genus contains over 200 species distributed broadly across Africa, North America, and South America. [6] It previously belonged to the family Asclepiadaceae, which is now classified as the subfamily Asclepiadoideae of the dogbane family, Apocynaceae.

The genus was formally described by Carl Linnaeus in 1753, [7] who named it after Asclepius, the Greek god of healing. [8] 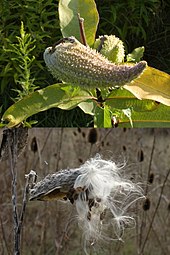 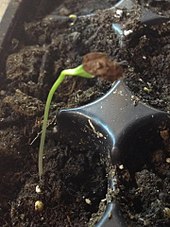 Chemical structure of oleandrin, one of the cardiac glycosides

Members of the genus Asclepias produce some of the most complex flowers in the plant kingdom, comparable to orchids in complexity. Five petals reflex backwards revealing a gynostegium (fused stamen filaments and styles) surrounded by a five-membrane corona. The corona is composed of a five paired hood and horn structure with the hood acting as a sheath for the inner horn. Glands holding pollinia are found between the hoods. The size, shape and color of the horns and hoods are often important identifying characteristics for species in the genus Asclepias. [9]

Pollination in this genus is accomplished in an unusual manner. Pollen is grouped into complex structures called pollinia (or "pollen sacs"), rather than being individual grains or tetrads, as is typical for most plants. The feet or mouthparts of flower-visiting insects such as bees, wasps and butterflies, slip into one of the five slits in each flower formed by adjacent anthers. The bases of the pollinia then mechanically attach to the insect, so that a pair of pollen sacs can be pulled free when the pollinator flies off, assuming the insect is large enough to produce the necessary pulling force (if not, the insect may become trapped and die). [10] Pollination is effected by the reverse procedure, in which one of the pollinia becomes trapped within the anther slit. Large-bodied hymenopterans are the most common and best pollinators, accounting for over 50% of all Asclepias pollination, [11] whereas monarch butterflies are poor pollinators of milkweed. [4] 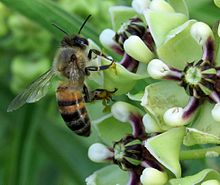 Asclepias species produce their seeds in pods termed follicles. The seeds, which are arranged in overlapping rows, bear a cluster of white, silky, filament-like hairs known as the coma [12] (often referred to by other names such as pappus, "floss", "plume", or "silk"). The follicles ripen and split open, and the seeds, each carried by its coma, are blown by the wind. Some, but not all, milkweeds also reproduced by clonal (or vegetative) reproduction.

American milkweeds are an important nectar source for native bees, wasps, and other nectar-seeking insects, though non-native honey bees commonly get trapped in the stigmatic slits and die. [10] [13] Milkweeds are also the larval food source for monarch butterflies and their relatives, as well as a variety of other herbivorous insects (including numerous beetles, moths, and true bugs) specialized to feed on the plants despite their chemical defenses. [4]

Milkweeds use three primary defenses to limit damage caused by caterpillars: hairs on the leaves, cardenolide toxins, and latex fluids. Data from a DNA study indicate that, generally, more recently-evolved milkweed species ("derived" in botany parlance) use these preventative strategies less but grow faster than older species, potentially regrowing faster than caterpillars can consume them. [14] [15]

Research indicates that the very high cardenolide content of Asclepias linaria reduces the impact of the OE parasite, Ophryocystis elektroscirrha, on the monarch butterfly, Danaus plexippus. By contrast, some species of Asclepias are extremely poor sources of cardenolides, such as Asclepias fascicularis, Asclepias tuberosa, and Asclepias angustifolia.

Milkweed is not grown commercially in large scale, but the plant has had many uses throughout human history. [4] Milkweed has a long history of both medicinal, every day and, military use that most people aren’t even aware of.  The Omaha people from Nebraska, the Menomin from Wisconsin and upper Michigan, the Dakota from Minnesota, and the Ponca people from Nebraska, traditionally used it for medicinal purposes. They used it for everything from diarrheia relief, for sore throats it was chewed, for swelling and rashes, new mothers that could not produce milk would drink it, it was used to treat colic, to expel tapeworms, to cure snakebite, and for a contraceptive. Heart-leaf milkweed was used by the Miwok people of California for its stems, which they dried and used for cords such as strings and ropes. [16] The milkweed filaments from the coma (the "floss") are hollow and coated with wax, and have good insulation qualities. During World War II, more than 5,000 t (5,500 short tons) of milkweed floss was collected in the United States as a substitute for kapok. [17] [18] Milkweed is grown commercially as a hypoallergenic filling for pillows [19] and as insulation for winter coats. [20]

A study of the insulative properties of various materials found that milkweed floss was outperformed by other materials in terms of insulation, loft, and lumpiness, but it scored well when mixed with down feathers. [21] Milkweed fibers are also used to clean up oil spills. [22] 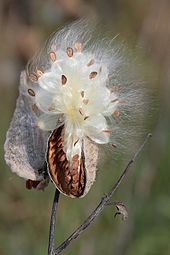 The bast fibers of some species can be used for rope. Milkweed latex contains about two percent latex and was attempted to be used as a source of natural rubber by both Nazi Germany and the United States during World War II. No record has been found of large-scale success.

Asclepias is also known as "Silk of America" [23] which is a strand of common milkweed ( Asclepias syriaca) gathered mainly in the valley of the Saint Lawrence River in Canada. The silk is used in thermal insulation, acoustic insulation, and oil absorbents. [24] [25]

Milkweed also contains cardiac glycoside poisons that inhibit animal cells from maintaining a proper K+, Ca2+ concentration gradient. [5] As a result, many peoples of South America and Africa used arrows poisoned with these glycosides to fight and hunt more effectively. Milkweed is toxic and may cause death when animals consume large quantities of the plant. Milkweed also causes mild dermatitis in some who come in contact with it. Nonetheless, it can be made edible if properly processed. [4]

The leaves of Asclepias species are a food source for monarch butterfly larvae and some other milkweed butterflies. [4] These plants are often used in butterfly gardening and monarch waystations. [26]

However, some milkweed species are not suitable for butterfly gardens and monarch waystations. For example, Asclepias curassavica, or tropical milkweed, is often planted as an ornamental in butterfly gardens. Year-round plantings in the USA are controversial and criticised, as they may be the cause of new overwintering sites along the U.S. Gulf Coast, leading to year-round breeding of monarchs. [27] This is thought to adversely affect migration patterns, and to cause a dramatic buildup of the dangerous parasite, Ophryocystis elektroscirrha. [28] New research also has shown that monarch larvae reared on tropical milkweed show reduced migratory development (reproductive diapause), and when migratory adults are exposed to tropical milkweed, it stimulates reproductive tissue growth. [29]

Monarch caterpillars do not favor butterfly weed (Asclepias tuberosa) because the leaves of that milkweed species contain little toxin ( cardiac glycosides). [30] Some other milkweeds may have similar characteristics.

There are also 12 species of Asclepias in South America, among them: A. barjoniifolia, A. boliviensis, A. curassavica, A. mellodora, A. candida, A. flava, and A. pilgeriana.

Species formerly classified under the genus Asclepias include: