Willows, also called sallows and osiers, form the genus Salix, around 400 species [2] of deciduous trees and shrubs, found primarily on moist soils in cold and temperate regions of the Northern Hemisphere. Most species are known as willow, but some narrow-leaved shrub species are called osier, and some broader-leaved species are referred to as sallow (from Old English sealh, related to the Latin word salix, willow). Some willows (particularly arctic and alpine species) are low-growing or creeping shrubs; for example, the dwarf willow ( Salix herbacea) rarely exceeds 6 cm (2.4 in) in height, though it spreads widely across the ground. 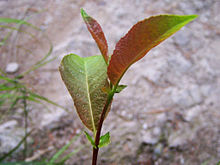 At the base of the petiole a pair of stipules form. These may fall in spring, or last for much of the summer or even for more than one year ( marcescence).

Willows all have abundant watery bark sap, which is heavily charged with salicylic acid, soft, usually pliant, tough wood, slender branches, and large, fibrous, often stoloniferous roots. The roots are remarkable for their toughness, size, and tenacity to live, and roots readily sprout from aerial parts of the plant. [3]

The leaves are typically elongated, but may also be round to oval, frequently with serrated edges. Most species are deciduous; semi evergreen willows with coriaceous leaves are rare, e.g. Salix micans and S. australior in the eastern Mediterranean. All the buds are lateral; no absolutely terminal bud is ever formed. The buds are covered by a single scale. Usually, the bud scale is fused into a cap-like shape, but in some species it wraps around and the edges overlap. [4] The leaves are simple, feather-veined, and typically linear-lanceolate. Usually they are serrate, rounded at base, acute or acuminate. The leaf petioles are short, the stipules often very conspicuous, resembling tiny, round leaves, and sometimes remaining for half the summer. On some species, however, they are small, inconspicuous, and caducous (soon falling). In color, the leaves show a great variety of greens, ranging from yellowish to bluish color. Willows are among the earliest woody plants to leaf out in spring and the last to drop their leaves in autumn. Leafout may occur as early as February depending on the climate and is stimulated by air temperature. If daytime highs reach 55 °F (10 °C) for a few consecutive days, a willow will attempt to put out leaves and flowers. Leaf drop in autumn occurs when day length shortens to approximately ten hours and 25 minutes, which varies by latitude (as early as the first week of October for boreal species such as S. alaxensis and as late as the third week of December for willows growing in far southern areas). 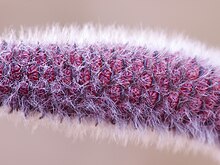 Willows are dioecious, with male and female flowers appearing as catkins on separate plants; the catkins are produced early in the spring, often before the leaves.

The staminate (male) flowers are without either calyx with corolla; they consist simply of stamens, varying in number from two to 10, accompanied by a nectariferous gland and inserted on the base of a scale which is itself borne on the rachis of a drooping raceme called a catkin, or ament. This scale is square, entire, and very hairy. The anthers are rose-colored in the bud, but orange or purple after the flower opens; they are two-celled and the cells open latitudinally. The filaments are threadlike, usually pale brown, and often bald.

The pistillate (female) flowers are also without calyx or corolla, and consist of a single ovary accompanied by a small, flat nectar gland and inserted on the base of a scale which is likewise borne on the rachis of a catkin. The ovary is one-celled, the style two-lobed, and the ovules numerous.

Almost all willows take root very readily from cuttings or where broken branches lie on the ground. The few exceptions include the goat willow ( Salix caprea) and peachleaf willow ( Salix amygdaloides). One famous example of such growth from cuttings involves the poet Alexander Pope, who begged a twig from a parcel tied with twigs sent from Spain to Lady Suffolk. This twig was planted and thrived, and legend has it that all of England's weeping willows are descended from this first one. [5] [6]

Willows are often planted on the borders of streams so their interlacing roots may protect the bank against the action of the water. Frequently, the roots are much larger than the stem which grows from them.

Willows have a wide natural distribution from the tropics to the arctic zones and are extensively cultivated around the world. [7] 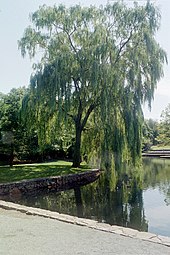 A weeping willow, an example of a hybrid between two types of willow

Willows are very cross-compatible, and numerous hybrids occur, both naturally and in cultivation. A well-known ornamental example is the weeping willow (Salix × sepulcralis), which is a hybrid of Peking willow ( Salix babylonica) from China and white willow ( Salix alba) from Europe.

Numerous cultivars of Salix L. have been developed and named over the centuries. New selections of cultivars with superior technical and ornamental characteristics have been chosen deliberately and applied to various purposes. Most recently, Salix has become an important source for bioenergy production and for various ecosystem services.

The first edition of the Checklist for Cultivars of Salix L. (willow) was compiled in 2015, which includes 854 cultivar epithets with accompanying information. 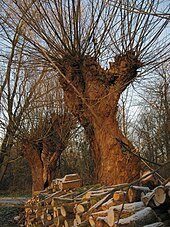 Knotted willow and woodpile in the Bourgoyen-Ossemeersen, Ghent, Belgium 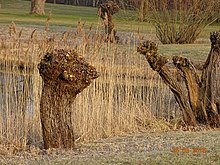 Willows are used as food plants by the larvae of some Lepidoptera species, such as the mourning cloak butterfly. [9] Ants, such as wood ants, are common on willows inhabited by aphids, coming to collect aphid honeydew, as sometimes do wasps.

A small number of willow species were widely planted in Australia, notably as erosion-control measures along watercourses. They are now regarded as invasive weeds which occupy extensive areas across southern Australia and are considered 'Weeds of National Significance'. Many catchment management authorities are removing and replacing them with native trees. [10] [11]

Willow roots spread widely and are very aggressive in seeking out moisture; for this reason, they can become problematic when planted in residential areas, where the roots are notorious for clogging French drains, drainage systems, weeping tiles, septic systems, storm drains, and sewer systems, particularly older, tile, concrete, or ceramic pipes. Newer, PVC sewer pipes are much less leaky at the joints, and are therefore less susceptible to problems from willow roots; the same is true of water supply piping. [12] [13]

Willow species are hosts to more than a hundred aphid species, belonging to Chaitophorus and other genera, [14] forming large colonies to feed on plant juices, on the underside of leaves in particular. [15] Corythucha elegans, the willow lace bug, is a bug species in the family Tingidae found on willows in North America.

Rust, caused by fungi of genus Melampsora, is known to damage leaves of willows, covering them with orange spots. [16]

The leaves and bark of the willow tree have been mentioned in ancient texts from Assyria, Sumer and Egypt[ citation needed] as a remedy for aches and fever, [17] and in Ancient Greece the physician Hippocrates wrote about its medicinal properties in the fifth century BC. Native Americans across the Americas relied on it as a staple of their medical treatments. It provides temporary pain relief. Salicin is metabolized into salicylic acid in the human body, and is a precursor of aspirin. [18] In 1763, its medicinal properties were observed by the Reverend Edward Stone in England. He notified the Royal Society, which published his findings. The active extract of the bark, called salicin, was isolated to its crystalline form in 1828 by Henri Leroux, a French pharmacist, and Raffaele Piria, an Italian chemist, who then succeeded in separating out the compound in its pure state. In 1897, Felix Hoffmann created a synthetically altered version of salicin (in his case derived from the Spiraea plant), which caused less digestive upset than pure salicylic acid. The new drug, formally acetylsalicylic acid, was named Aspirin by Hoffmann's employer Bayer AG. This gave rise to the hugely important class of drugs known as nonsteroidal anti-inflammatory drugs ( NSAIDs).

Some of humans' earliest manufactured items may have been made from willow. A fishing net made from willow dates back to 8300 BC. [19] Basic crafts, such as baskets, fish traps, wattle fences and wattle and daub house walls, were often woven from osiers or withies (rod-like willow shoots, often grown in coppices). One of the forms of Welsh coracle boat traditionally uses willow in the framework. Thin or split willow rods can be woven into wicker, which also has a long history. The relatively pliable willow is less likely to split while being woven than many other woods, and can be bent around sharp corners in basketry. Willow wood is also used in the manufacture of boxes, brooms, cricket bats, cradle boards, chairmans and other furniture, dolls, flutes, poles, sweat lodges, toys, turnery, tool handles, veneer, wands and whistles. In addition, tannin, fibre, paper, rope and string can be produced from the wood. Willow is also used in the manufacture of double basses for backs, sides and linings, and in making splines and blocks for bass repair. 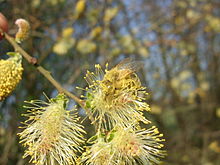 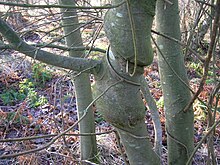 Environmental art installation " Sandworm" in the Wenduine Dunes, Belgium, made entirely out of willow

The willow is one of the four species associated with the Jewish festival of Sukkot, or the Feast of Tabernacles, cited in Leviticus 23:40. Willow branches are also used during the synagogue service on Hoshana Rabbah, the seventh day of Sukkot.

In China, some people carry willow branches with them on the day of their Tomb Sweeping or Qingming Festival. Willow branches are also put up on gates and/or front doors, which they believe help ward off the evil spirits that wander on Qingming. Legend states that on Qingming Festival, the ruler of the underworld allows the spirits of the dead to return to earth. Since their presence may not always be welcome, willow branches keep them away. [30] In traditional pictures of the Goddess of Mercy Guanyin, she is often shown seated on a rock with a willow branch in a vase of water at her side. The Goddess employs this mysterious water and the branch for putting demons to flight. Taoist witches also use a small carving made from willow wood for communicating with the spirits of the dead. The image is sent to the nether world, where the disembodied spirit is deemed to enter it, and give the desired information to surviving relatives on its return. [31] The willow is a famous subject in many East Asian nations' cultures, particularly in pen and ink paintings from China and Japan.

A gisaeng (Korean geisha) named Hongrang, who lived in the middle of the Joseon Dynasty, wrote the poem "By the willow in the rain in the evening", which she gave to her parting lover (Choi Gyeong-chang). [32] Hongrang wrote:

In Japanese tradition, the willow is associated with ghosts. It is popularly supposed that a ghost will appear where a willow grows. Willow trees are also quite prevalent in folklore and myths. [33] [34]

In English folklore, a willow tree is believed to be quite sinister, capable of uprooting itself and stalking travellers. The Viminal Hill, one of the Seven Hills of Rome, derives its name from the Latin word for osier, viminia (pl.).

Hans Christian Andersen wrote a story called "Under the Willow Tree" (1853) in which children ask questions of a tree they call "willow-father", paired with another entity called " elder-mother". [35]

"Green Willow" is a Japanese ghost story in which a young samurai falls in love with a woman called Green Willow who has a close spiritual connection with a willow tree. [36] "The Willow Wife" is another, not dissimilar tale. [37] "Wisdom of the Willow Tree" is an Osage Nation story in which a young man seeks answers from a willow tree, addressing the tree in conversation as 'Grandfather'. [38]

The genus Salix is made up of around 400 species [2] of deciduous trees and shrubs: