The striped skunk (Mephitis mephitis) is a skunk of the genus Mephitis that occurs across most of North America, including southern Canada, the United States, and northern Mexico. [2] It is currently listed as least concern by the IUCN on account of its wide range and ability to adapt to human-modified environments. [1]

Striped skunks are polygamous omnivores with few natural predators, save for birds of prey. [3] Like all skunks, they possess highly developed, musk-filled scent glands to ward off predators. They have a long history of association with humans, having been trapped and captively bred for their fur [4] and kept as pets. [5] Striped skunks are one of the most recognizable of North America's animals, and are a popular figure in cartoons and children's books. [6]

The English word skunk has two root words of Algonquian and Iroquoian origin, specifically seganku ( Abenaki) and scangaresse ( Huron). [7] [8] The Cree and Ojibwe word shee-gawk is the root word for Chicago, which means 'skunk-land'. [8] Alternative English names for the striped skunk include common skunk, [9] Hudsonian skunk, northern skunk, black-tailed skunk and prairie polecat. [8] The latter name was originally used by English settlers, who noted the animal's similarity to the European polecat. This association likely resulted in the striped skunk's subsequent unfavorable reputation as a poultry thief, despite it being a much less destructive animal than the true polecat. [4] The name "Alaska sable" was employed by furriers during the late 19th century. [10]

The earliest fossil finds attributable to Mephitis were found in the Broadwater site in Nebraska, dating back to the early Pleistocene less than 1.8 million years ago. By the late Pleistocene (70,000–14,500 years ago), the striped skunk was widely distributed throughout the southern United States, and it expanded northwards and westwards by the Holocene (10,000–4,500 years ago) following the retreat of the Wisconsin glacier. [11]

Phylogenetic analyses of the species' cytochrome b gene and microsatellite data in 2012 indicated that there are four phylogroups of striped skunk. The first emerged from the Texas-Mexico region during the Rancholabrean before the Illinoian glaciation and colonized the southeastern United States. The second, still originating in the Texas-Mexico region, expanded westwards to the Rocky Mountains during the Illinoian glacial period. Two subsequent subclades were formed during the Sangamonian interglacial on either side of the Sierra Nevada. The subclade that colonized the Great Basin later expanded eastwards across the northern Rocky Mountains during the Holocene, recolonising the Great Plains and making contact with the southern phylogroup. A similar, but less significant, secondary contact occurred when the same subclade intermingled with members of the eastern phylogroup east of the Mississippi river. [11]

Thirteen subspecies of the striped skunk are generally recognized: [2] 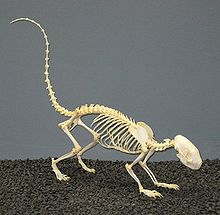 Skeleton on exhibit at the Museum of Osteology, Oklahoma City, Oklahoma

Skull of a striped skunk

The striped skunk is a stoutly-built, short-limbed animal with a small, conical head and a long, heavily furred tail. [9] Adult males are 10% larger than females, with both sexes measuring between 52–77 cm in total body length and usually weighing 1.8–4.5 kg (4.0–9.9 lb), though some may weigh 5.5 kg (12 lb). [7] The feet are plantigrade with bare soles, [7] and are not as broad or flat as those of hog-nosed skunks. [9] The forefeet are armed with five long, curved claws adapted for digging, while those on the hind feet are shorter and straighter. [7]

The color patterns of the fur vary greatly, but generally consist of a black base with a white stripe extending from the head which divides along the shoulders, continuing along the flanks to the rump and tail. Some specimens have a white patch on the chest, while others bear white stripes on the outer surface of the front limbs. [7] Brown or cream-colored mutations occasionally occur. [8]

Like all skunks, the striped skunk possesses two highly developed scent glands, one on each side of the anus, containing about 15 milliliters of musk each, [10] which provides a chemical defense against predation. [13] This oily, yellow-colored musk consists of a mixture of powerfully odorous thiols ( sulfur analogues of alcohols, in older sources called "mercaptans"), which can be sprayed at a distance of several meters. The odor of this musk was likened by Ernest Thompson Seton to a mixture of perfume musk, essence of garlic, burning sulfur and sewer gas "magnified a thousand times", [8] though Clinton Hart Merriam claimed that it isn't "one tenth" as offensive as that produced by minks and weasels. [10] It can be sprayed at a distance of several meters. If sprayed on the eyes, this compound can cause a temporary burning sensation. [7]

The striped skunk is polygamous, and normally breeds once a year, though yearling females who have failed to mate may enter a second estrous cycle a month after the first. The mating season usually occurs between mid-February to mid-April, though it is delayed at higher latitudes. Prior to copulating, the males' testicles swell during the January–February period, with maximum size being attained in March. Males during this period will cover much ground in their search for females, sometimes covering 4 km (2.5 mi) per night. [7]

When a male locates a female, he will approach her from the rear and lick her genitals, then bite her on the nape before copulating. A single male may have a harem of several females, which he mates with and defends against other males for a period of about 35 days. Once the mating period has finished, the impregnated females confine themselves to their dens, while the males attempt to rebuild their fat reserves. [7]

The gestation period lasts around 59–77 days, with kits being born at about mid-May to early June. Litters generally consist of 2–12 kits, though a litter of 18 is known from Pennsylvania. Kits are born blind and sparsely furred, weighing 25–40 grams. The eyes open after around three weeks, and are weaned after 42–56 days. [7] Although their musk is still undeveloped, kits of this age will instinctively assume the defensive stand position when threatened. [8] At this point, the kits may accompany their mother outside the den, becoming independent after 2½ months. [7]

The striped skunk may dig its own dens, though it will appropriate those abandoned by other animals should the opportunity present itself. These dens are normally used only in late fall, winter, and early spring, while females with unweaned kits make use of them in late spring and summer. In cultivated areas, striped skunks will dig their dens in fencerows, likely because they are less likely to be disturbed by machinery or livestock. In winter it is common for a single den to be occupied by multiple females and a single male. [3] During this period, the striped skunk saves its energy by lowering its body temperature from 38 °C to 32 °C. Although it will forage for short periods in winter, it primarily depends on its fat reserves in cold weather, and can lose as much as 50% of its body weight. [14] 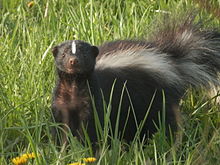 In defensive posture with erect and puffed tail, indicating that it may be about to spray

While primarily an insectivore, the striped skunk is adaptable enough to incorporate other animals and even vegetable matter into its diet. The most frequently consumed insects include grasshoppers, beetles, crickets, and caterpillars. In the winter and spring months, the striped skunk will supplement its diet with vertebrates such as white-footed mice, voles, eggs and the chicks of ground nesting birds. [3] Striped skunks inhabiting California's coastal areas will feed on crabs and beached fish. [15] While not adapted for chasing fleet-footed prey, at least one specimen was observed pursuing gray cottontails into their burrows. [8] When in season, the skunk will also consume vegetable matter, such as apples, blueberries, black cherries, ground cherries, corn and nightshade. [3]

Because of its formidable defensive capability, the striped skunk has few natural enemies. Mammalian predators typically avoid skunks, unless they are starving. Such predators include cougars, coyotes, bobcats, badgers, and red and gray foxes. Predatory birds, including golden and bald eagles, and great horned owls tend to have greater success in hunting skunks, though they still risk being blinded by their prey's musk. [3]

The striped skunk is one of the major carriers of the rabies virus, second only to raccoons in the US where skunks are 25% of annual cases. Skunks are the primary hosts in the north- and south-central United States as well as in Canada. Cases of rabies in this species are generally epizootic and recurrent. They are also host for the canine parvovirus and may also suffer from leptospirosis. [16]

The striped skunk is commonly featured in the myths and oral traditions of Native Americans. Some stories try to explain its striped pattern or how it got its smell. Skunks fill various roles in legends and may be featured as heroes, villains, tricksters, or monsters. For the Muscogee people, the skunk represented family loyalty and defense of loved ones. The Winnebago people used the skunk to symbolize vanity, being beautiful on the outside but ugly on the inside. [17]

The striped skunk was once called the "emblem of America" by Ernest Thompson Seton. It has been prevalent in modern popular culture, being the subject of various jazz and funk songs like Cab Calloway's "Skunk Song" and the Brecker Brothers' " Some Skunk Funk". The skunk connection in these genres may be due to the term "funk" being a term for strong odor. Skunks are also popular characters in children's stories, comics and cartoons, most notably the Warner Bros character Pepé Le Pew; their musky odor making them a source of fear and ostracization. [17]

Trapping and fur use 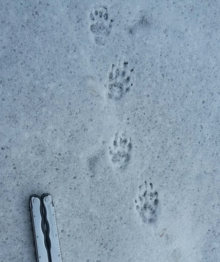 Tracks in the snow

The striped skunk is one of North America's most sought after furbearers, and was once the second most harvested after the muskrat. Its fur is intrinsically valuable, being durable and having rich luster, though this trait decreases with wear and exposure to sunlight. Skunk pelts are divided into four grades, with the most prized being the ones with a greater amount of black. These grades are further subdivided in value according to their locality, with the most valuable occurring in northern regions, where the fur is finer and darker. [4] Skunks are notable for being easy to trap, even approaching traps they had been previously caught in. Because skunks are difficult to kill without having them discharge their musk (and thus ruin their fur) they were typically dispatched with a paralyzing blow to the lower back or drowned if caught in a box trap. [8]

Skunk farming largely began during the late 1890s, when there was much foreign demand for their skins, and intensive trapping had largely extirpated the more valuable mostly black-colored specimens. Captive breeding of skunks proved relatively simple when compared to mink and marten farming, as skunks are easier to tame and have less specialized dietary needs. [4] Emphasis was placed on selectively breeding the tamest and darkest colored skunks. [8] Prior to the First World War, skunk pelts were primarily shipped to Europe until better methods of deodorizing and processing the skins lead to increased interest in selling them for North American consumption. [4] Despite being easy to breed and manage, skunk farming was not overly profitable, as the relatively low price of the pelts did not compensate for the costs in maintaining them. Nevertheless, raising skunks was considered good practice for amateur fur farmers wishing to later move on to more valuable furbearers like martens, sable, mink and silver foxes. [8]

The striped skunk is easily tamed and was often kept in barns to kill rats and mice during the 19th century. [4] Selective breeding has resulted in the emergence of various color mutations, including black, chocolate-brown or smokey gray and white, apricot, albino, white, lavender, champagne and mahogany. [5]

A tame skunk being cuddled

The striped skunk was regularly eaten by trappers and indigenous peoples, provided the animal was not too old or had not sprayed before being killed. [8] American zoologist Clinton Hart Merriam described skunk meat as white, tender, sweet and more delicate than chicken. [10] The meat was prized by Chinese immigrants, who also bought skunk gall bladders for medicinal purposes. [15]

The fat was once reputed to make an excellent lubricant. [8]

The musk was once used as a folk remedy for asthma, despite its very strong odor. [9]