Designed for families with children ages 2 to 12, the resort has more than fifty rides, shows, attractions, restaurants, and shops, plus a botanical garden and water park. The 152-room Legoland Hotel opened May 15, 2015, [7] followed by Legoland Beach Retreat on April 7, 2017, [8] which has 166 rooms in 83 freestanding bungalows designed to resemble giant Lego sets.

On January 15, 2010, Merlin Entertainments declared its intention to build a Legoland theme park on the site of the former Cypress Gardens theme park, which permanently ceased operations in 2009. [2] Six days later, a news conference was held with Florida Governor Charlie Crist and park officials. [9] The story broke a day before the press conference after an email between public officials was obtained by a local newspaper; the sale price was $22.3 million. [10]

After a relatively short construction period (as compared to parks which were built from scratch), Legoland Florida opened on Saturday, October 15, 2011. [5] The former Splash Island water park reopened as Legoland Water Park on May 26, 2012. [11]

From mid-March to May 2020, as with all Legoland parks, the park was shut down due to the COVID-19 pandemic.

More than fifty rides, shows, and attractions are featured in the park based on those at other Legoland parks. The Jungle Coaster ride from Legoland Windsor was moved to the park and renamed Lego Technic Test Track (now currently The Great Lego Race). [19]

Cypress Gardens' botanical park was preserved as part of the park. [20] Also surviving is a vast Banyan tree that was planted as a seedling in a five-gallon bucket in 1939. [21] In addition, four attractions originally from Cypress Gardens were renovated and renamed: the Triple Hurricane wooden rollercoaster was renamed to Coastersaurus, the Okeechobee Rampage family coaster was renamed to The Dragon, and Swamp Thing, a Vekoma family inverted coaster, was renamed to Flying School. The Starliner coaster, formerly built for the Miracle Strip Amusement Park in Panama City in 1963 before being moved to Cypress Gardens in 2004, was dismantled for sale. [22] The Island in the Sky observation tower was also retained and operated from 2011 until it was closed in 2017. [9]

The theme park has fourteen sections: [24]

The Beginning features no attractions, but it has the park's main gift shops, restaurants, and administrative facilities. The Legoland Hotel is located just outside the park's entrance. 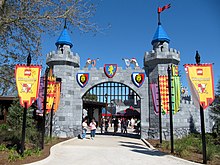 The area occupied by The Lego Movie World was previously themed as The World of Chima. [30]

Legoland Florida fully reopened the original botanical gardens from the former Cypress Gardens park in March 2014. [31] [32] The gardens were the initial attraction at the site, which first opened in 1936. After the theme park reopened as Legoland Florida, the Oriental Gardens and Florida Pool within Cypress Gardens remained closed while repairs and landscaping were performed. The Florida Pool, named for its shape, was originally built for the 1953 film Easy to Love, starring Esther Williams. [31]

The gardens are owned by Polk County and were listed on the U.S. National Register of Historic Places in April 2014. [33]

The Legoland Water Park was initially constructed as "Splash Island", which debuted in 2005 with five rides within Cypress Gardens. Splash Island was the only water park in Polk County when it opened. [34] After Merlin Entertainments purchased the Cypress Gardens site, Splash Island was reworked with Lego themes replacing the original Polynesian-themed attractions. [35] The Legoland Water Park also added a sixth attraction, a toddler water play area named Duplo Splash Safari, which featured slides and fountains in a shallow pool. [36] [37] The initial extra cost for admission to the water park was $12 for ages 4 and up, aimed at visitors spending a second day at Legoland. [35]

The following are individual attractions that have closed formerly operated throughout the park's history:

As of 2018 [update] only one section of the park has closed while another has been rethemed:

The World of Chima

The World of Chima was a section based on Lego's Legends of Chima sets and was sponsored by Cartoon Network throughout the area's lifespan. The area opened on July 3, 2013 and was the park's first new land. [40] It was closed on May 29, 2017 and will be replaced by The LEGO Movie World.

Duplo Village originally opened with the park on October 15, 2011. On October 3, 2013 it was announced that the area would be enhanced and rethemed as Duplo Valley. [41] One attraction would be removed while the others were re-themed.