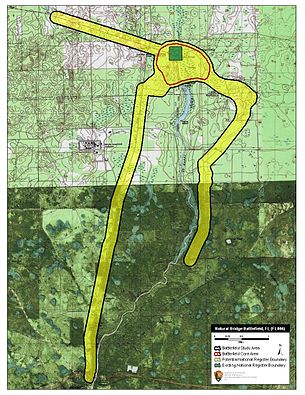 The Battle of Natural Bridge was fought during the American Civil War in what is now Woodville, Florida near Tallahassee on March 6, 1865. As people in Tallahassee tell the story, handed down since the civil war, a small band of Confederate troops and volunteers, mostly composed of teenagers from the nearby Florida Military and Collegiate Institute that would later become Florida State University, and the elderly, protected by breastworks, prevented a detachment of United States Colored Troops from crossing the Natural Bridge on the St. Marks River. The Natural Bridge is a 1⁄4-mile-long (400-meter) stretch along which the St. Marks River runs underground, after dropping into a sinkhole. [1]

The Union's Brig. Gen. John Newton had undertaken a joint force expedition to engage and destroy Confederate troops that had attacked at Cedar Keys, Florida and Fort Myers and were allegedly encamped somewhere around St. Marks. The Union Navy had trouble getting its ships up the St. Marks River. The Union Army force, however, had advanced and, after finding one bridge destroyed, started before dawn on March 6 to attempt to cross the river at Natural Bridge. The Union troops initially pushed Rebel forces back, but not away from the bridge.

Sailors from USS Hendrick Hudson also participated, and two were awarded the Medal of Honor for their part in this battle: Seaman John Mack and Coxswain George Schutt. [2]

Confederate forces under Brigade General William Miller, protected by breastworks, guarded all of the approaches and the bridge itself. The action at Natural Bridge lasted most of the day, but, unable to take the bridge in three separate charges, the Union troops retreated to the protection of the fleet.

Based on the involvement of the students from the Florida Military and Collegiate Institute, the Florida State University Reserve Officer Training Corps (ROTC) program is one of only four Army ROTC programs to have a battle streamer for their actions in the Civil War. [3] Since it was originally part of the Army, FSU's Air Force ROTC unit also displays the same battle streamer.

The site of the battle is now Natural Bridge Battlefield State Historic Site, a Florida State Park, and contains a monument with the inscription:

This monument erected under authority of an act of the legislature of Florida of 1921 as a just tribute of the people of Florida to commemorate the victory of the battle of Natural Bridge. March 6, 1865. And to keep in cherished memory those brave men and boys who, in the hour of sudden danger, rushed from home desk and field and from the West Florida Seminary and joining a few disciplined troops by their united valor and patriotism saved their capital from the invaders. Tallahassee being the only capital of the South not captured by the enemy during the War between the States.

First reenactment of the battle in 1974

A ceremony honoring the combatants on both sides of the Battle of Natural Bridge, followed by a reenactment of the battle featuring Union, Confederate, and civilian reenactors, is held at the park the first weekend of March every year. The event is free and open to the public. [4]

The site is now called Natural Bridge Battlefield Historic State Park. [4] The Civil War Trust, a division of the American Battlefield Trust, and its partners have acquired and preserved 110 acres (45 hectares) of the battlefield that are now part of the state park. [5]