The Atlantic Coast Line served the Southeast, with a concentration of lines in Florida. Numerous named passenger trains were operated by the railroad for Florida-bound tourists, with the Atlantic Coast Line contributing significantly to Florida's economic development in the first half of the 20th century. [2]

Forming the ACL by mergers 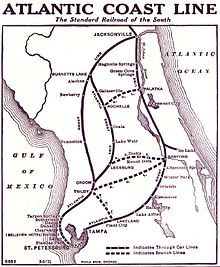 1914 map of the lines through Florida

In 1898 the Petersburg Railroad and the Richmond & Petersburg Railroad formally merged, and two years later the combined company took control of the ACL's routes south of Virginia as well as the Norfolk & Carolina Railroad, which operated from Norfolk, Virginia to Tarboro, North Carolina. [3] These mergers created an ACL system reaching from southern Virginia to South Carolina and Georgia. [3] Other small acquisitions took place in 1901, and in 1902 the ACL took over the Plant System, which operated numerous lines within Florida and Georgia. [3] This same year the ACL took control of the Louisville and Nashville Railroad as well as the Nashville, Chattanooga and St. Louis Railway, though the two were never merged into the ACL and were operated independently. [3] The ACL acquired the East Carolina Railway in 1935, running south from Tarboro to Hookerton, although the 12-mile extension to Hookerton was abandoned in 1933. [6] The ACL's last major acquisition was the Atlanta, Birmingham and Coast Railroad, which it purchased in 1927, though the AB&C was not merged into the ACL until 1945. [3]

By the early 1900s the railroad had largely reached its final configuration and began to focus on upgrading its physical plant. [3] By the 1920s the railroad's main line from Richmond, Virginia to Jacksonville, Florida had been double-tracked, which benefited the railroad during the 1920s when Florida boomed. [3]

In 1928 the ACL completed a line between Perry, Florida and Drifton, near Monticello, Florida, the last link of the new " Perry Cutoff". [7] This created a more direct route between Chicago and Florida's west coast and bypassing Jacksonville, one which passed through Macon, Albany, and Thomasville, the route followed by ACL's passenger train Southland from December 1928 to 1957 when it was rerouted to Jacksonville. 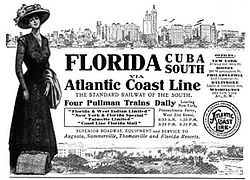 1910 advertisement for ACL trains from New York to Florida

During the Great Depression ACL's freight traffic declined by around 60%, but the railroad survived the 1930s without declaring bankruptcy; its success in this regard has been attributed to its leadership and careful financial practices, as well as owning the Louisville and Nashville, which remained strong through the Depression. [3]

During World War II ACL's passenger traffic increased 200% and freight traffic 150%. [3] The railroad provided a submarine-proof alternative to coastal shipping, and it also served the fast-emerging military industry in the Southeast. [3] In 1942, Champion McDowell Davis (nicknamed "Champ") became president of the ACL after starting with the railroad in the 1890s as a messenger boy. [8] He immediately began an improvement program that finished in the mid-1950s, including the rebuilding of several hundred miles of track, the installation of modern signalling systems and improvements to freight yards. [3] The railroad spent at least $268 million in upgrading its physical plant during this period. [3]

In 1956 the railroad moved its headquarters, which had been sited at and adjacent to Wilmington, North Carolina's Union Station to Jacksonville, Florida. Jacksonville was selected from three candidate cities, the other two being Savannah, Georgia and Charleston, South Carolina. Construction of the new office complex was finished in July 1960, with the move from Wilmington completed over the following weeks. [9]

As early as October 1958 [4] the ACL and competitor Seaboard Air Line Railroad had discussed the possibility of a merger, initiating extensive studies on the potential unified system. The results showed that the merger could save considerable money through savings incurred and reduced expenditures to the amount of $38 million annually. [3] On August 18, 1960, the merger was approved by shareholders of both railroads. [4] In 1963, a merger between the two companies was approved by the Interstate Commerce Commission, however, petitions for reconsideration were filed leading to a court decision to remand the approval of the merger on May 13, 1965, citing the Clayton Antitrust Act. Following another round of court decisions in 1966, the merger was allowed to proceed, and did so on July 1, 1967. The result was the creation of the Seaboard Coast Line. [4] [10] 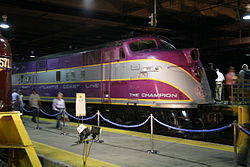 ACL #501, an EMC E3, pulled the Champion and now resides at the North Carolina Transportation Museum.

During its early years, the ACL handled mostly seasonal agricultural products, but by World War II its freight traffic had become more diverse. [3] During the 1950s, around 44% of all freight traffic consisted of manufactured and miscellaneous items, while bulk traffic like coal and phosphates also expanded during this time. [3] During the 1950s, the ACL acquired some 13,000 new freight cars, to be used on high-speed trains offering reduced running times compared to earlier equipment. [3] This allowed the railroad to remain competitive in the face of competition from the Interstate highway system. [3]

The ACL's Pinellas Special in Belleair, Florida, in 1920

The ACL's passenger traffic consisted almost entirely of Florida-bound traffic, largely from the Northeast, but also from the Midwest via trains that were operated by multiple railroads and handled by the ACL at their southern ends. [3] In 1939, in response to the Seaboard's popular new streamliner, the Silver Meteor, the ACL launched its first streamlined train, the all-coach Champion. ACL invested heavily in its passenger fleet after World War II [3] but passenger revenue fell from $28.5 million in 1946 to $14.1 million in 1959. [3] Until its 1967 merger the railroad continued to maintain and improve its passenger service, even replacing old stations with new. [3]

All of ACL's New York - Florida trains ran on the Pennsylvania Railroad north of Washington, D. C., then via the Richmond, Fredericksburg and Potomac Railroad from Washington to Richmond. Tampa/St. Petersburg trains used ACL rails south of Richmond all the way to their destinations. Trains for Miami ran on the Florida East Coast Railway from Jacksonville to Miami, but after passenger service on the FEC effectively ended with a long-lasting strike in 1963, ACL transferred its Miami-bound trains to Seaboard rails at Auburndale, Florida.