Strayer University is a private, for-profit university with its headquarters in Washington, DC. It was founded in 1892 as Strayer's Business College [1] and later became Strayer College, [2] before being granted university status in 1998. Strayer University operates under the holding company Strategic Education, Inc. ( NASDAQ:  STRA), which was established in 1996 and rebranded with the merger with Capella University. [3] [4] [5]

Siebert Irving Strayer founded Strayer's Business College in Baltimore, Maryland in 1892. [1] Strayer established the college to teach business skills to former farm workers, [10] including shorthand, typing and accounting. [2] [11] Thomas W. Donoho joined the school in 1902. [12] In its first decade of operations, enrollment at the school gradually increased, attracting students from other states, and in 1904 Strayer opened a branch of the school in Washington, D.C. [1] [2] [12]

Enrollment further expanded as demand for trained accountants grew after the passage of the Revenue Act of 1913 and World War I increased the need for government clerks with office skills. [2] During the 1930s, the college was authorized to grant collegiate degrees in accountancy by the Washington, D.C., board of education. [2] The school founded Strayer Junior College in 1959, when it was given the right to confer two-year degrees. In 1969, the college received the accreditation needed to grant four-year Bachelor of Arts degrees and was renamed Strayer College. [2]

From the 1980s to the late 1990s, Strayer College grew rapidly; enrollment increased from approximately 1,800 in 1981 and 2,000 in 1983, [13] [14] to around 9,000 by 1997. [11] The college expanded the range of degree programs and courses it offered to include subjects such as data processing management and health care management. [13] In 1987, the college was given authorization to grant Master of Science degrees. [3] During the 1990s, the college began to focus on offering information technology courses. [8] According to The Washington Times, high demand for computer training due to the increased use of computers in offices and movement toward "knowledge-based" employment led to higher enrollment at Strayer. [11] In addition, Strayer began providing training programs in computer information systems for companies including AT&T Corporation and government agencies such as the Internal Revenue Service. [15] In 1996, the college launched Strayer Online to offer classes via the Internet. [15] [16] 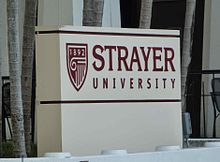 In 1998, Strayer College was granted university status by the District of Columbia Education Licensure Commission and became Strayer University. [17] During the early and mid-2000s, Strayer established its first campus locations outside of Maryland, Virginia and the District of Columbia, in North Carolina, South Carolina, Georgia, Tennessee, Pennsylvania, and Florida. [18] [19] [20] According to the university's website, Strayer University now operates additional campuses in Delaware, New Jersey, West Virginia, Alabama, Mississippi, Arkansas, and Texas. [21]

Sondra Stallard was named the thirteenth president of Strayer University in May 2007. Stallard had been dean since 1996. Stallard previously served as dean of the school of continuing and professional studies at the University of Virginia. [22]

In 2011 the Washington Post claimed that Strayer had a 15 percent graduation rate, listing it among the lowest college graduation rates in the Washington, D.C., area. Strayer claimed the graduation rate for its full cohort of bachelor's students was 33 percent. [26] In December 2011, the university acquired the Jack Welch Management Institute from Chancellor University for about $7 million. The institute offers a fully online Executive MBA program, as well as certificate programs. [9] [27] [28] [29] In 2012, Michael Plater was named fourteenth president of Strayer University. Previously, he served as provost and chief academic officer. [12] [30]

On August 9, 2012, the syndicated comic strip Doonesbury described Strayer's unusually high executive compensation as part of a series of satirical strips on for-profit education. [31] [32] [33] In addition to reporting Silberman's 2009 compensation (which it described as fifty times more than Harvard's president), the strip said that in the same year that Strayer spent $1,300 per student on instruction, it spent $2,500 per student on marketing and returned $4,500 per student in profit. [14] [33]

In 2013 USA Today listed Strayer University of Washington D.C. as a "red flag" institution for posting a student loan default rate that surpassed its graduation rate. [34] In October 2013, the university initiated a major change in its physical operations by announcing the closure of its 20 Midwest campus locations. Strayer reported total enrollments dropped 17 percent, while new enrollments dropped 23 percent. It was announced that all students currently enrolled in programs in the Midwest at the time would be able to continue their education through Strayer's online only program offerings. [35] [36]

In 2015, Brian Jones, who had previously been Strayer University's general counsel, was named the university's fifteenth president. Prior to joining Strayer University, Jones was a lawyer and higher education entrepreneur. He served as General Counsel of the U.S. Department of Education from 2001 until 2005. [37]

Comedian and game show host Steve Harvey was a spokesperson for Strayer and has appeared in several advertisements [41] [42] and spoke at Strayer's commencement ceremony in May 2015. [43] Strayer partnered with Daily Mail in February 2015 to produce a new section of the Daily Mail site named Strayer Business News. As part of the deal, Daily Mail would co-produce education and business content for its new business section. [44]

Strayer announced the launch of Strayer@Work, a new performance improvement solution for businesses in May 2015. As part of the launch, Strayer also announced a partnership with Fiat Chrysler Automobiles (FCA) to offer free college education to all participating FCA dealership employees. [45] FCA dealers pay a monthly fee to send employees to Strayer. [46] [47] Strayer has educational partnerships with approximately 300 Fortune 1000 companies. [45]

In March 2017, Strayer announced a collaboration with financial news network Cheddar to produce digital entrepreneurship specialization as a part of Strayer's MBA program. [48]

More than half of the students enrolled at Strayer University take all of their courses online, and the entire bachelor's and master's degree programs can be completed via the Internet. [50] [51] As of June 2019 [update], Strayer had a total enrollment of 52,253 students. [52]

Strayer University is headquartered in Washington, D.C., with campus locations mainly in the eastern and southern U.S. [53] The university has 76 campuses located in 15 U.S. states and Washington D.C. [54]

The admissions requirement for undergraduate degree programs at Strayer University is a high school diploma or its equivalent. For graduate degrees (not including the Executive MBA) students must have proof of completion of a baccalaureate degree from an accredited college or university, a cumulative GPA of at least 2.50, and official transcripts from all other colleges or universities attended. [55] Admissions requirements for the Jack Welch Executive MBA program include a minimum 3.0 undergraduate GPA, a baccalaureate degree from an accredited institution in the United States, and 5 years professional experience. [56] An associate degree earned from a partner school can be transferred in its entirety toward a bachelor's degree. [57]

Strayer University is accredited by the Middle States Commission on Higher Education, one of the six regional accrediting bodies recognized by the Department of Education. [60] [61]

The Jack Welch Management Institute, acquired by Strayer University in 2011, was established by Jack Welch after his retirement from General Electric. The institute offers executive MBA degrees and executive certificates covering business-related topics. [9] In September 2016, it was announced that the Jack Welch Management Institute was ranked on Princeton Review's list of Top 25 Online MBA Programs of 2017. [62] [63]

In May 2017, Strayer announced that its Registered Nurse (RN) to Bachelors of Science in Nursing (BSN) program had earned accreditation by the Commission on Collegiate Nursing Education (CCNE). [64] [65]

Since the early 2000s, Strayer University has had a high proportion of minority students or people of color. The college has had more women students than men since the late 1990s. [15] [19] According to the university, two thirds of Strayer's students are women and over half are African American or Hispanic. [66] The National Center for Education Statistics reports that Strayer's student body is 56 percent black, 21 percent white, and 13 percent Hispanic. [67]

The average age of students at the college is approximately 33, and the majority work full-time. [60]

According to research from the Brookings Institution, Strayer University students, as a whole, hold the fifth largest amount of US student loan debt, approximately $8 billion. [70] The 5-year default rate of Strayer students is 31 percent, and the average repayment of debt after five years is -7 percent. [71]

Noteworthy alumni of Strayer University include the following:

Strayer Education Inc. is a publicly traded corporation, established as a holding company for the college and other assets in 1996. The company was created to take what was then Strayer College public and raise capital for expansion. [3]