The first Belk, established as New York Racket, in 1902.

Belk was founded in 1888 by William Henry Belk in Monroe, North Carolina, outside Charlotte. The store was first called "New York Racket" and then "Belk Brothers", after Belk made his brother, physician Dr. John Belk, his partner. [3] Belk bought in volume to pass savings on and sold at fixed prices, then a relatively unusual practice. [4]

By 1909, the company had moved its headquarters to Charlotte and built a huge flagship store on Trade and Tryon Streets in downtown Charlotte, which would remain the company's headquarters until it was closed in 1988 to make way for the construction of what is now Bank of America Corporate Center. The business grew steadily, relying on "bargain sales" and advertising to grow the business and increase its influence throughout the South.

Beginning in 1921 with the Leggett Bros. stores of South Boston, Virginia, the Belk company grew by investing in various partnerships with local merchandisers in nearby markets. [4] Belk's growth out of the Southeast was pushed by Earl Jones Sr and the Belk-Jones brand that opened the first Belk west of the Mississippi in 1947. The Jones family and the Belk-Jones brand continued to grow Belk's westward expansion. This complex story is chronicled in a book published by Belk – Belk, Inc.: The Company and the Family That Built It – about the evolution of the company. [5]

This structure allowed Belk to expand quickly and permitted local variation, but resulted in a diluted brand identity since most stores were co-branded. By the 1990s, the system had become increasingly untenable: stores were held by over 350 separate legal entities, Belk family members disagreed about whether to maintain or sweep away the structure, and some local partners threatened stability by selling their stakes. For example, the heirs of John G. Parks, majority owners of the Parks-Belk chain, sold their interests to Proffitt's, a competitor. The Belks quickly sold their stake as well, although Belk would later purchase the stores back as part of its later acquisition of the entire Proffitt's chain. When Proffitt's made an offer for the Leggett family's stake, which included 42 stores comprising about 20 percent of Belk's revenue, John and Tom Belk were forced to respond by forming a new company in 1996 that bought the Leggetts out. This move accelerated the slow trend of consolidating the store's ownership under the Belks. [6]

In 1998, the company formed a new entity (Belk, Inc.) that merged the 112 remaining Belk companies, swapping the existing partners' local interests for shares in the combined entity; for example, the Hudson family in Raleigh received almost 5% of the shares. [7] The same year, Belk made a deal to acquire seven Dillard's locations in exchange for nine of theirs so that each could build on regional strengths. Slowly, Belk eliminated the dual brands, completing the process with a chain-wide Belk rebranding in the fall of 2010.

On July 5, 2005, Belk completed the purchase of 47 Proffitt's and McRae's department stores from Saks Incorporated, primarily in Tennessee and Mississippi. Belk converted the 39 Proffitt's and McRae's stores to the Belk nameplate on March 8, 2006. [8] Just over a year later, Belk purchased 38 Parisian department stores from Saks on October 2, 2006. Although most Parisian stores were converted to the Belk nameplate since September 12, 2007, some duplicate Parisian stores were closed, as at The Mall at Barnes Crossing in Tupelo, Mississippi, Richland Mall (then known as Midtown at Forest Acres), Columbiana Centre in Columbia, South Carolina, and Citadel Mall in Charleston, South Carolina. Four Parisian stores in Indiana, Michigan, and Ohio, plus a store under construction at the time in Michigan, were sold by Belk to The Bon-Ton Stores, Inc. Integrating the larger, more upscale Parisian stores proved a challenge for Belk, and spurred the creation of the company's flagship strategy. [9]

During the fourth quarter of 2005, Belk completed the sale of its private-label credit card division, Belk National Bank, to GE MoneyBank. Consumers were issued new Belk credit cards replacing the old ones issued by BNB. All new Belk cards are now issued by GE MoneyBank, now known as Synchrony Bank. [10]

On October 3, 2010, the News & Observer reported that Belk planned to update its logo. [11] On October 12 at SouthPark Mall, Belk introduced the new logo, its first since 1967. The chain embarked on a $70 million marketing campaign that replaced the old slogan "All for You!" with a new slogan, "Modern. Southern. Style." Sixty stores got new signs in the first phase, with the remainder getting new signs throughout 2011. [12] Advertisements for Belk & Co. jewelry continue to use a variation of the old logo.

On April 3, 2015, news reports revealed that Belk was exploring "strategic alternatives," including a possible sale of the company. [13]

On August 24, 2015, Belk announced that it had entered into a definitive merger agreement to be acquired by New York-based private equity firm Sycamore Partners. [14] The acquisition was completed on December 10, 2015. [15]

On June 29, 2016, Belk announced that effective as of July 5, Lisa Harper, CEO of Hot Topic (which is another Sycamore Partners-owned company), would replace Tim Belk as CEO of Belk. This would be the first time since the founding of the company that a non-Belk family member would head the company. [16] 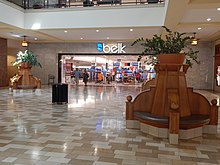 Belk at the Mall of Georgia in Buford, Georgia 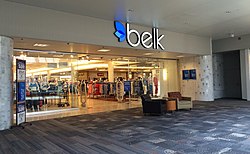 Even as Belk has made its recent acquisitions, the chain has operated limited electronic commerce on its website, and those websites acquired and redirected to Belk.com. Home furnishings such as bedding, small kitchen appliances, crystal, dinnerware, and china have been offered for several years to online shoppers as a part of the chain's online bridal and gift registry. The chain revamped its website and registry on September 15, 2008. Celebrity-branded product lines are another pursuit, including a partnership with actress Kristin Davis for a ladies apparel and accessories collection which debuted in fall 2008 in 125 store locations and online. However, that product line was discontinued in late 2009. [18]

In July 2020, it was announced that Sycamore Partners had made a $1.75B offer to acquire department store chain and competitor JCPenney out of bankruptcy, and would rebrand 250 JCPenney stores to the Belk name, to help the chain compete directly with Macy's. The remaining JCPenney stores will be liquidated. [22] 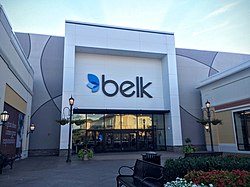 The chain has multiple "flagship" locations—larger locations in urban and metropolitan centers, [23] and a wider array of merchandise and services including in-store salons. [24] [25] As of 2014, the chain claimed 18 flagship locations, and plans to upgrade more locations.