Orangeburg County comprises the Orangeburg, SC Micropolitan Statistical Area, which is also included in the Columbia-Orangeburg- Newberry, SC Combined Statistical Area. It is located in the Midlands region of South Carolina.

The district was occupied for thousands of years by succeeding cultures of indigenous peoples. By the time of European encounter, Siouan-speaking tribes, such as the Pee Dee, Cheraw and Catawba, inhabited the Piedmont area above the fall line.

The Orangeburg Judicial District was chartered by European Americans in 1769 from a mostly unorganized upland area between the Congaree and Savannah rivers. A county, initially of the same name but later called Orange, was organized within the district but deorganized in 1791, after the American Revolutionary War.

During the nineteenth century, the districts and counties were developed chiefly as cotton plantations for short-staple cotton. This development followed the invention of the cotton gin in the late eighteenth century, which made the processing of short-staple cotton profitable. The county became a center of labor by black slaves on the plantations, who were transported from coastal areas and the Upper South to cultivate and process cotton. Those brought from the coastal areas were likely of the Gullah culture and language. The enslaved African Americans greatly outnumbered the white planters and non-slaveholding whites. Reflecting the patterns of nineteenth-century settlement, the area is still chiefly agricultural and majority-African American in population.

In 1868, under the revised state constitution during the Reconstruction era, South Carolina districts were organized as counties. Resident voters were enabled to elect their state representatives rather than having them chosen by the state legislature, as was done previously. Election of representatives by the state legislature had kept the districts dominated by the elite owners of major plantations in the Low Country and elsewhere. The changes in rules expanded participation in the franchise by more male residents. Emancipation of slaves after the war under newly ratified federal constitutional amendments resulted in freedmen voting. Using voter intimidation, white Democrats took control of the state legislature by the end of the century; they passed state electoral laws and a new constitution that essentially disfranchised most blacks, a situation that lasted until after the federal legislation of the 1965 Voting Rights Act.

A small western portion of Orangeburg County was annexed in 1871 to the newly formed Aiken County during the Reconstruction era.

In 1908 the northern portion of the County along the Congaree River was separated and included in the newly formed Calhoun County, with its seat at Saint Matthews. In 1910 a small western portion of Berkeley County, around Holly Hill and Eutawville, was annexed to Orangeburg County, thus bringing the county to its present size. 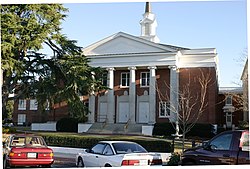 Region within the state 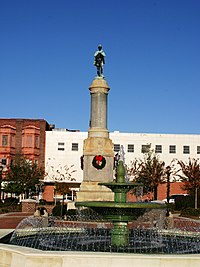 The Pee Dee tribes (such as the Beaver Creek Indians and the Pee Dee Indian Nation of Beaver Creek) traditionally occupied land between the two forks of the Edisto River in Orangeburg County, and especially along Beaver Creek, as did their ancestors for thousands of years before European encounter. Their original language family was Siouan. English colonial accounts from the 18th century acknowledge the Pee Dee peoples in this area.

Many Pee Dee tribe members still live in this area. In 1998 the tribe established its government as a non-profit organization, known as the Beaver Creek Indians. They achieved state recognition as a tribe on January 27, 2006, but are still working toward federal recognition. This has been more difficult for some of the older, landless tribes who became more assimilated during and after the colonial era. Today the Beaver Creek people speak English as their first language. They are a multi-racial people, having absorbed both European and African people into their culture over the centuries. Common family names within the tribe are: Chavis, Fogle, Fanning, Hutto, Williams, Barr, Bolin, Jackson, Huffman and Gleaton.

At least four railroad lines run through Orangeburg County; a former Southern Railway Line, and three CSX lines, the westernmost which was formerly a Seaboard Air Line Railroad line running along US 321. [15]