Lexington is the largest town in and the county seat of Lexington County, South Carolina, United States. [6] Lexington is a suburb of the state's capital, Columbia. The population was 17,870 at the 2010 Census [7] and it is the second-largest municipality in the greater Columbia area. The 2019 estimated population is 22,157. [8] According to the Central Midlands Council of Governments, the greater Lexington area [a] had an estimated population of 111,549 in 2020 and is considered the fastest-growing area in the Midlands. [9] Lexington's town limits are bordered to the east by the city of West Columbia. [10] [11]

In 1735, the colonial government of King George II established 11 townships in backcountry South Carolina to encourage settlement and to provide a buffer between Native American tribes to the West and colonial plantations in the Lowcountry. The townships included one named Saxe Gotha, which flourished with major crops of corn, wheat, tobacco, hemp, and flax as well as beeswax and livestock. In 1785, the name Saxe Gotha was replaced with Lexington County, in commemoration of the Battles of Lexington and Concord in Massachusetts. The county's first courthouse was built in Granby, but chronic flooding forced the courthouse to move in 1820 to its present location, establishing the community of Lexington Courthouse. The community was incorporated as the Town of Lexington in 1861. [12] The Battle of Tarrar Springs was fought nearby on November 16, 1781.

During Sherman's March to the Sea in the American Civil War, much of the town of Lexington was destroyed by Union forces as they protected William Sherman's western flank as Union troops attacked Columbia. Most of the town of Lexington, including the courthouse, were torched and burned. Like much of the South after the Civil War, Lexington struggled economically, but local farms and the lumber industry helped stabilize the economy after Reconstruction. Many current brick buildings were built in the aftermath of severe fires in 1894 and 1916. [13] By the 1890s, the Columbia to Augusta Railroad and the Lexington Textile Mill prompted the town to grow. 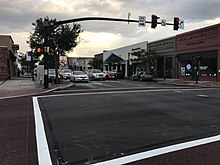 On August 16, 1994, Lexington was struck by an F-3 tornado, generated from the remnants of Tropical Storm Beryl, resulting in over 40 injuries and $50 million in damages. From the same tropical storm, 21 other tornados were reported throughout the state, including six in Lexington County. [14]

The Move Over Law, a law that requires drivers to change lanes when there is a stopped emergency vehicle on the side of the road, originated in Lexington after James D. Garcia, a paramedic, was struck and injured at an accident scene on January 28, 1994. Garcia was listed at fault, leading to his work to create this law. South Carolina's version (SC 56-5-1538) passed in 1996 and was revised in 2002. [15] [16]

A Murphy Express gas station on Augusta Highway in Lexington sold a $400 million winning Powerball ticket on September 18, 2013. This ticket was the fifth largest winning ticket of any United States lottery. [17] [18] [19]

Buildings listed on the National Register of Historic Places. [20] include:

A view of Lexington's Main Street

On November 5, 2013, incumbent Lexington mayor Randy Halfacre lost a reelection bid to Councilman Steve MacDougall by 18 votes. [22] A recount was initiated but the results remained the same. [23] Steve MacDougall, who took office in December 2013, is the incumbent mayor of Lexington, currently serving his second term.

In 2015, Lexington's town council voted in a 5-1 motion to impose a 2% hospitality tax on all prepared food items. As a result, any prepared food item sold in the town, such as fast food or restaurant food items, has a total tax of 9%. The council vote garnered criticism after a county-wide tax referendum failed the year before; if passed the county would have increased sales tax by 1% for traffic improvements. [24] The tax generates over two million dollars annually, and the town uses the funds for road and traffic improvement, including the addition of turn lanes, the upgrading of traffic lights, and the improving of intersections. [24] The largest project completed was the conversion of South Carolina Highway 6 and Church Street to one-way streets in downtown Lexington in 2019. [25] Future projects include the building of an overpass over Interstate 20 and the widening of SC Highway 6. [26]

On July 2, 2020, the town council passed a town ordinance requiring citizens to wear face masks in public to combat the COVID-19 pandemic in South Carolina. [27] Councilman Todd Carnes drew criticism after stating three time in the council meeting that the government has "infinite power" to create laws such as these, but opposed enacting a face mask ordinance because "science does not indicate that it helps." [28]

The Lexington Community Band performs the Star-Spangled Banner at the opening of a Blowfish baseball game. 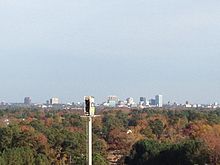 View of Columbia skyline from Lexington

Public education in Lexington is administered by Lexington County School District One, which has an enrollment of over 27,000 students and employees 3,900 faculty and staff. [41]

Lexington has a public library, a branch of the Lexington County Library. [42]

This is a list of municipalities within 15 miles of the town center of Lexington, SC: