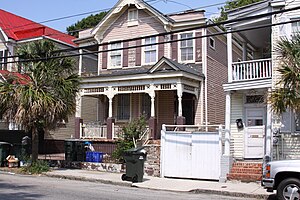 The U.S. state of South Carolina is the 23rd largest state by population, with a population of 5,024,369 as of 2017 United States Census estimates.

South Carolina's center of population is 2.4 mi (3.9 km) north of the State House in the city of Columbia. [2]

According to the University of South Carolina's Arnold School of Public Health, Consortium for Latino Immigration Studies, South Carolina's foreign-born population grew faster than any other state between 2000 and 2005. [3] The Consortium reports that the number of Hispanics in South Carolina is greatly undercounted by census enumerators and may be more than 400,000. [3] [4]

South Carolina’s population increased by 15.4 percent between 1990 and 2000 and by another 7.4 percent between 2000 and 2005; 11.6 percent of that increase has been attributed to immigration, primarily from Mexico and Latin America. Most work in the construction industry, with another proportion in agriculture, in addition to processing factories. Latino population has increased considerably faster in South Carolina and the Southeast than for the United States as a whole. [5]

From 1720 until 1920, African slaves and their descendants made up a majority of the state's population. (See census data below.) Whites became a majority in the state after that date, following the migration of tens of thousands of blacks to northern industrial cities in the Great Migration. In the 21st century, most of the African-American population in the state lives in the Lowcountry and the Midlands areas, historically areas of their greatest concentrations of population.

6.6% of South Carolina's total population were reported as under 5 years old, 25.2% under 18, and 12.1% were 65 or older. Females made up approximately 51.4% of the population in 2000. Those who self-identify as having American ancestry are of mostly British Isles ancestry: English and Scots-Irish stock.

Note: Births in table do not add up, because Hispanics are counted both by their ethnicity and by their race, giving a higher overall number. 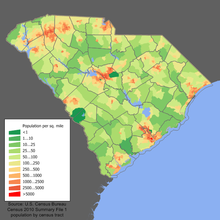 Main article: List of cities and towns in South Carolina

Population estimates as of 2010.

Columbia, Charleston, and Greenville all have urbanized area populations between 400,000–550,000, while their metropolitan statistical area (MSA) populations are each more than 600,000. The Greenville-Spartanburg-Anderson MSA population consists of approximately 1.4 million people, making it the largest in the state and third largest in the Carolinas. 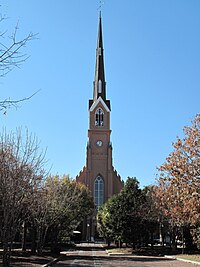 St. Matthew's German Evangelical Lutheran Church in Charleston is the tallest house of worship in the state. Its spire rises 255 feet.

Sephardic Jews have lived in the state for more than 300 years, [14] [15] [16] especially in and around Charleston. Many came from London, where they were merchants. [17] Until about 1830, South Carolina had the largest population of Jews in North America, most in Charleston. Some have married and assimilated into Christian society; in the 21st century, less than 1% of the total religiously affiliated people are Jewish. The proportion of Roman Catholics in the state has been increasing given migrants from the North and immigration from Latin America.

Beginning in 1790, the United States Census Bureau collected the population statistics of South Carolina. The years listed prior to that are estimates and exclude the Native American population. From 1790 until 1860, the designated demographic classifications were      white,      black slave and      free black.

The following is a list of census data for the state of South Carolina: [18]