Greer is a city in Greenville and Spartanburg counties in the U.S. state of South Carolina. The population was 25,515 as of the 2010 census [4] and had risen to an estimated 33,373 as of 2019. [1] The city of Greer is located in Greenville County. It is part of the Greenville– Anderson– Mauldin Metropolitan Statistical Area. The city is additionally part of the Greenville-Spartanburg-Anderson, SC Combined Statistical Area in Upstate South Carolina.

Greer is adjacent to Greenville-Spartanburg International Airport (GSP), which serves Greenville, Spartanburg, and the Upstate. Greer is also the site of the only BMW manufacturing facility in North America. According to a June 2005 article in The Greenville News, BMW's Greer plant employs about 9,000 people, and has attracted dozens of suppliers in South Carolina, providing jobs for more than 12,000 people. Greer is home to the South Carolina Inland Port, an intermodal facility that receives and sends containers by rail to the Port of Charleston.

Greer was named for James Manning Greer, whose ancestry traces from Scotland, through Ireland. Many of his descendants still reside in the region. James Manning Greer was a descendant of John Greer, Sr. who surveyed his land in Laurens County in 1750. John and his family were already in Laurens County, prior to the Greer passengers who arrived aboard the ship The Falls in 1764. John Greer's family settled at Duncans Creek between that Creek and the Enoree River and close to Duncan's Creek Presbyterian Church. John, Sr.'s great grandson James Manning Greer settled his family near Greenville in an area that eventually became Greer's Station.

Located in the foothills of the upstate region of South Carolina, Greer's history stretches from its days as a hunting ground for local Cherokees, to its settlement by pioneering families in the 1700s, to the advent of the railroad in the 1800s. 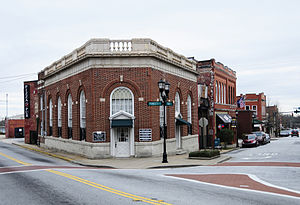 The area now known as Greer was once part of the "Domain of the Cherokees" prior to the American Revolutionary War. In 1777 the area was added to the state of South Carolina. Development toward the birth of the town occurred in 1873, when the Richmond and Danville Air Line Railway (now the Norfolk Southern Railway) established a line between Atlanta and Charlotte. A station was built on land that belonged to James Manning Greer, and was named Greer's Station. The first post office was located in the new depot, Greer's Depot. That depot was a red brick, Victorian structure with a slate roof and a cupola. It was located immediately adjacent to the current Norfolk Southern rail line between Trade Street and Depot Street, facing toward Moore Street. It was demolished in 1976 by its then owner, the Southern Railway System, in order to avoid property taxes. When the town was incorporated in 1876, it was named Town of Greer's. One hundred years later, the name was officially changed to the City of Greer without an "s" on the end.

Merchants, blacksmiths and physicians set up shop in what is now the downtown area of Greer. In 1900, Greer's first bank, the Bank of Greer's, opened. The Piedmont and Northern Railway laid a second railroad line through Greer in 1914. With two active train lines, Greer became an attractive site for commerce. The railway meant big business for local farmers, enabling them to ship their crops, mainly cotton and peaches, out of state. Greer also became a textile-manufacturing center, with flourishing mills that included Victor, Franklin, Apalache and Greer Mills. The communities that grew up around the mills were as close-knit as the outlying farming communities.

In 1939 artist Winfred Walkley painted a mural, Cotton and Peach Growing, for the town's old post office as one of thirteen works commissioned by the U.S. Treasury Department's Section of Fine Arts between 1938 and 1941 for post offices and federal buildings throughout South Carolina. [6] The building is now home to the Greer Heritage Museum.

After World War II, the city began to grow and diversify its industrial base. A new hospital and high school were built. People came to downtown Greer from Spartanburg and Greenville to shop. In the early 1960s Interstate 85 was opened, as well as the Greenville-Spartanburg International Airport. Imports derailed the textile industry in the 1970s and threatened to turn Greer into a ghost town, but the citizens of Greer worked together to attract new industry. [7]

There were 6,714 households out of which 31.8% had children under the age of 18 living with them, 47.1% were married couples living together, 15.7% had a female householder with no husband present, and 32.8% were non-families. 27.9% of all households were made up of individuals and 12.1% had someone living alone who was 65 years of age or older. The average household size was 2.47 and the average family size was 2.99.

The city of Greer has a thriving recreation sports program. Greer Recreation (Greer Rec) has many sports opportunities. Their best accomplishments include the 2007 9–10 Little League softball state championship, and the 2019 6u Rookie Ball Dixie Youth Baseball State Championship. The 6u team went undefeated in a 12 team tournament held in West Columbia to give Greer baseball its first state Championship ever.

In the summer of 2010, the combined team of two schools, (Blue Ridge Middle School, and Greer Middle) the 11- to 12-year-old Little League softball team went to the regional tournament in Warner Robins, Georgia, but lost the first two games and was eliminated.

City Stadium in Greer is a WPA project completed in 1938; it currently seats 3,000. Throughout the years the stadium has hosted Little League, scholastic, The American Legion World Series, and semi-professional sports and received a major renovation in 1997. [1]

In 2012 the City of Greer successfully renovated the Cannon Center, a former National Guard armory that later became a basketball gym. The facility was originally built in 1936. The completed renovation included new office space, classroom space, dressing rooms for events/productions, and state of the art audio-visual equipment.

Greer is home to two hospitals and a cancer center which is undergoing an expansion.

In early 2018, Spartanburg Regional began construction on an expansion of its Gibbs Cancer Center & Research Institute at Pelham location. The 190,000-square-foot expansion is intended to provide cancer care for more patients along the border of Spartanburg and Greenville counties. It is anticipated that the construction will be completed in spring 2020. [15]

Greer is served by Amtrak, the national passenger rail system, which operates to both Greenville and Spartanburg. Greer is the location of the South Carolina Inland Port, an inland port built to handle containerized goods. The port is served by Norfolk Southern, and connects Greer to the Port of Charleston. [19] [20]

Greer has a public library, a branch of the Greenville County Library System. [21]