Hartley House (1830) located on U.S. Highway One across from the old Batesburg Graded School

In February 1946, Sergeant Isaac Woodard, a black World War II veteran, was removed from a bus in Batesburg and severely beaten by local police officers, including Chief Lynwood Shull. The assault left Woodard completely and permanently blind. Woodard was traveling home by Greyhound bus after being honorably discharged from Camp Gordon in Augusta, Georgia, the bus driver having reported Woodard to local police in Batesburg-Leesville after a verbal argument between the two. Due to South Carolina's reluctance to pursue the case, President Harry S. Truman ordered a federal investigation. The sheriff, Lynwood Shull, was indicted and went to trial in federal court in South Carolina, where he was acquitted by an all-white jury. Such miscarriages of justice by state governments influenced a move towards civil rights initiatives at the federal level. Truman subsequently established a national interracial commission, made a historic speech to the NAACP and the nation in June 1947 in which he described civil rights as a moral priority, submitted a civil rights bill to Congress in February 1948, and issued Executive Orders 9980 and 9981 on June 26, 1948, desegregating the armed forces and the federal government. The attack was the subject of radio commentaries by Orson Welles in July and August 1946. [10] [11]

In early 2018, the Town of Batesburg-Leesville, along with Town Attorney Christian Spradley, Police Chief W. Wallace Oswald, and Mayor Lancer Shull (no relation to Linwood Shull[ citation needed]), reopened the Woodard case to consider dismissing the 1946 charges. During a regular term of municipal court on June 5, 2018, the Woodard case was reopened and the charges were dismissed[ citation needed] by Town Judge Robert Cook. A permanent historic plaque now stands on the corner of West Church Street and Fulmer Street in old Batesburg commemorating the civil rights incident at the site of the original police station. [12]

Batesburg-Leesville is served by a council-manager style government. The town employs approximate 60 full-time employees, and 35 volunteer firefighters. The town will operate from a $7.4 million budget in Fiscal Year 2018-2019. [13]

William Theodore "Ted" Luckadoo is the town manager and oversees the day-to-day administrative functions of the town. Ted was named the third town manager of consolidated Batesburg-Leesville in 2014. Jason "Jay" Hendrix was named the Assistant Town Manager on August 8, 2019. [15]

The Batesburg-Leesville Fire Department [16] consists of two stations, five career staff members and 41 volunteer firefighters as of September 2019. The two stations are located in each of the historic business districts and represent their origins as they are still identified as the Batesburg station and the Leesville station. The department boasts an Insurance Services Office Class 3/3B rating.

The top employer in Batesburg-Leesville is Lexington County School District Three with four different schools and a district office. The next is Ansaldo STS, which has a 184,000-square-foot (17,100 m2) manufacturing facility.

The town's economic dependence on poultry harvesting is apparent due to the presence of two large processing plants: Amick Farms and Columbia Farms. These assist in making Lexington County the top poultry producer in the state.

The South Carolina Poultry Festival (formerly the Ridge Poultry Festival) has been on the second Saturday in May since 1987. The festival features live music, food vendors, craft vendors, a carnival, a parade, and to conclude the event a cake auction and fireworks show.

The public school system in Batesburg-Leesville is administered by Lexington County School District Three,[ citation needed] which consists of:

All sports teams associated with School District Three use a panther as their mascot. The Panthers' colors are purple, gold, and blue.

The Batesburg-Leesville Elementary School opened 1996 and replaced the Old Batesburg Grade School [2] which had served the fourth and fifth grades and now serves as the Lexington School District Three Administrative Office. The new school allowed third grade to be shifted from the B-L Primary School to the new Elementary School give the current school breakdown by grade.

The Batesburg-Leesville High School opened in 1975. The new school was built on the former Summerland College campus on Summerland Avenue. The construction of a new school had been spurred by integration and student population increases. With integration a former building of Summerland College was used as a middle school in the early 1970's but a fire heavily damaged the building and eventually sped up the construction of the new high school. The first class to graduate in Panther Stadium was the class of 1976.

Prior to racial integration statewide, the local African-American students attended Twin-City High School and Hampton School. Twin-City High School was located on Maple Street in Batesburg where the Twin-City High School Park is now located. The park is owned by the Twin-City Alumni Association. The original two-story wooden Hampton School (1922) was replaced in 1954 by a single story brick structure on South Lee Street in Leesville. The original wooden building was subsequently torn down, but a marker remains under a large tree in the parking lot of Friendship Baptist Church on South Lee Street. Other "colored" schools included Leesville Colored Primary School and Batesburg-Saluda Colored School.

There were other older schools which had closed previously to include Delmar School which was located a few miles outside of town. View the Delmar School historical marker at [3]. More photographs of these old school buildings may be seen at SC School Insurance Photos 1935-50.

In 2008, Midlands Technical College opened a new Batesburg-Leesville satellite campus in the Leesville Historic District. The campus is within the boundaries of the Leesville College Park at the intersection of Main Street and College Street. 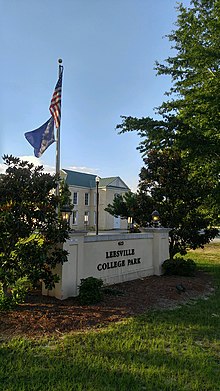 Batesburg-Leesville has a public library, a branch of the Lexington County Library. [18]

The town is also served by The State newspaper, which circulates amid most of the state.

In 2007, Lexington County Chronicle and The Dispatch-News began appearing at town stores and business to complement their subscribers in the area. This newspaper covers all county governments, state, national, and international news, to the extent such news concerns Lexington County residents.

Over-the-air channels receivable in Batesburg-Leesville include:

Batesburg-Leesville is located along the Atlantic Seaboard fall line which separates the Piedmont region from the Coastal Zone. Historically, U.S. Route 1 followed this line, and it presently separates the north and south sides of the duel town. Typically in this vicinity, the Piedmont area has a clay soil surface, while the Coastal Zone is sandy.

Notable figures who were born in, lived in, or are otherwise associated with Batesburg-Leesville include: