Union County is coterminous with the Union, SC, Micropolitan Statistical Area, [4] which is also included in the Greenville–Spartanburg– Anderson, SC Combined Statistical Area.

The area that includes Union County was once controlled by the Cherokee Indians and they used it as a hunting ground. Up until recent years, one could find numerous arrowheads with little effort throughout the county. [5]

The first European settlers in Union County came from the backcountry of Virginia and Pennsylvania; more than three-fourths were Scotch-Irish Presbyterians. It has been suggested that the first group of pioneers arrived as early as 1751. They settled in the northwestern section of the county near a small river that would later be named Fairforest Creek. According to tradition, Mr. McElwaine, a member of the party looked out at the thick woodlands and exclaimed, "What a fair forest!" At the time of their arrival, wild buffalo and horses abounded as well as panthers and cougars, which were called "tigers" or "tygers" by the settlers. This may be where the Tyger River got its name. [5]

The early settlers established Fairforest Presbyterian Church, the first house of worship in Union County. Around 1754, the Brown's Creek area was first settled, about four miles northeast of the present city of Union. A log church or meetinghouse was built and shared among several denominations that could not yet afford their own separate structures. The county and county seat were named for this "Union" church. Quakers arrived in the mid 1750s and settled the southern portion of the county, establishing Cane Creek Church in the Santuc community, and Padgett's Creek Church in the Cross Keys community. The Quakers left in the early 1800s because of their opposition to slavery. Baptists from North Carolina, under the leadership of Rev. Philip Mulkey, reached the Broad River in Fairfield County, SC in 1759. They relocated to Union County in 1762, and in 1771 formally organized into the first Baptist church in the South Carolina upcountry known as Fairforest Baptist Church. Many Baptist churches throughout the upcountry are descended from this original congregation. The congregation later moved to a site on present day SC Hwy 18 between Union and Jonesville where it remains to this day. [5]

During the first part of the American Revolution, the South Carolina backcountry was fairly quiet. Following the fall of Charleston in 1780, the British began focusing their attention on the Carolinas. At least five battles were fought in or near Union County, including Musgrove Mill, Fishdam, and Blackstock. The county also produced many notable heroes including Lt. Col. James Steen. The war divided the population between Loyalists and Patriots. This resulted in churches splitting up and settlers moving out of the area. Personal property was damaged by both sides. [5]

Following the war, the county seat was established at Unionville (now Union) and a courthouse was constructed. In 1791, the South Carolina Legislature established a district court that included Spartanburg, Union, Chester, and York counties. The area was called the Pinckney District and its headquarters was established at a central location in Union County. Land was cleared and streets were laid out for a new town that would be called Pinckneyville. A courthouse and jail were built for the new judicial district and a college was to be established in the town. [5]

Local tradition states that Pinckneyville was to be home to the United States Military Academy, but lost to West Point by one vote in Congress. Instead, local historians say that Pinckneyville was considered as the site for a federal arsenal. This was likely the source of the legend. In 1799, the General Assembly decided to restructure the state court system. Subsequently, the Pinckney District was abolished; with the loss of the court and associated businesses, Pinckneyville became a ghost town. [5]

During the early 1800s settlers developed large-scale cotton growing in the fertile soil of southern Union County, based on the use of enslaved labor. The demand for slaves in the Deep South drove the domestic market, and more than one million slaves were forcibly transported to the South in the antebellum years. There were numerous plantations in the county, several that are still standing, such as Rose Hill Plantation and the Cross Keys House. Rose Hill was the home of South Carolina's "Secession Governor," William Henry Gist. The northern section of the county was mostly home to yeoman farmers and small scale planters who owned fewer slaves. [5]

The county grew steadily during the antebellum period but remained almost fully agrarian. Stores and other businesses were established in the town of Union and a new courthouse and jail were designed for the town in 1823 by famed architect Robert Mills, designer of the Washington Monument. The courthouse was demolished in 1911, but the jail is still standing and in use by the City of Union. It is located beside the present courthouse, constructed in 1913. [5] 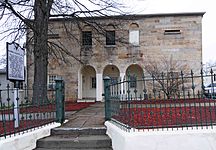 The Civil War brought a standstill to the county's growth and progress. Many local men rushed to enlist in the Confederate Army and numerous units of Union County soldiers served on battlefields across the South. On April 20, 1861 a strange object appeared in the sky above the Kelly-Kelton community of northeastern Union County. A large hot air balloon called the Enterprise descended to the ground, piloted by Professor T.S.C. Lowe, who had left Cincinnati, Ohio the day before. He had attempted to fly from Ohio to Washington, D.C. but instead was swept southward across Virginia into South Carolina. The locals crowded around this mysterious object, many insisting that Lowe be "shot on the spot," as they believed him to be a Northern spy. Local tradition states that Professor Lowe gave a Masonic distress sign and his life was saved by the Masons in the crowd. Eventually he would make it back to the North and work with the Union Army on aerial reconnaissance projects during the war. At the close of the war, Confederate President Jefferson Davis came through Union County following the fall of Richmond in 1865. He and his entourage crossed the ferry at Pinckneyville and made their way to the town of Union. They dined at the William Wallace house on Et Main Street in Union and the Cross Keys house in southwestern Union County before his eventual capture in Georgia. [5]

Following the war, a system of sharecropping and tenant farming was established to take the place of slavery and provide a consistent labor force. Union County's history parallels the history of much of the South during Reconstruction. The county was known for widespread Ku Klux Klan violence during this time period. The Industrial Revolution hit the county in the 1890s as local businessmen and Northern industrialists began investing in Union County textile mills. [5]

The first cotton mill was built at Lockhart around 1894; it was shortly followed by another in Union and Jonesville. Around 1900, a mill was built west of Union and the town of Buffalo sprang up around it. Workers, or operatives as they were called, lived in company-owned housing and obtained their food and other household goods from the company store. Many workers came from the mountains of North Carolina, where farming was difficult and outside work scarce. [5]

Cross Keys House in the Cross Keys community. Built around 1812–14.

In 1897, the Draytonville and Gowdeysville townships were removed from Union County to form part of Cherokee County. [5]

The turn of the century saw continued progress, as improvements were made in the city of Union and throughout the county. Roads were being paved and the automobile was introduced as new businesses appeared along the Main Street area. [5]

The Great Depression brought difficulties to the mill village, as pay decreased for workers. Meanwhile, in the county's rural areas, farmers suffered much less than those living in the city since they grew most of what they consumed. In the 1930s, the federal government bought large portions of poor quality land in southern Union County and established the Sumter National Forest. This land had been planted in cotton for many years and was overworked. Government programs like the CCC, PWA, and WPA put many Union County residents back to work, and government money helped improve the county's water and sewage plants and public roads. Many Union natives enlisted in the Second World War while developments continued in both urban and rural areas of the county. Cotton production and agricultural acreage was steadily declining and by 1944 Union County was 53 percent "forest land." The automobile had changed the lifestyle of mill workers because now they could drive to work and were no longer required to live in the proximity of the mill villages. [5]

The post-war years saw the introduction of new industries to the county, such as Torrington and Sonoco. Despite this, the county's economy remained 94 percent textile-related in 1970. In 1955, the U.S. 176 bypass (Duncan Bypass) was constructed, along with other road improvements that followed in later years. The Bypass became the center for much of Union's new business, including shopping centers and restaurants. In 1984, work on a four-lane connector to Spartanburg began which would become the Furman Fendley Highway (U.S. 176). [5]

Beginning in the 1980s, many of Union County's textile industries began closing and moving to other countries. The final departure of the textile industry was complete by the 1990s and this left a hole in the county's economy and cultural identity. In recent years, new specialty industries have taken the place of agriculture and textiles; two things that characterized the early history of Union County. [5]

Union County High School's Yellow Jackets Football team has seen great success in recent past. They won the 4A State Football Championship in 1990 and 1995, and won the 3A State Title in 1999, 2000, and 2002. They were also state runner-up in 2001. The Yellow Jackets were led to their three most recent championships by former head coach and current State Representative Mike Anthony. [17] He retired following the 2004 season. He was succeeded by Tommy Bobo, former Union High School Offensive Coordinator who left following the 1999 season to become the head football coach at Wren High School. Bobo led the Jackets to the region championship and the state semi-finals in 2005. Bobo resigned in 2007 after the school board decided to consolidate the three high schools. He accepted a position as an assistant at Spartanburg's Dorman High School. Jonesville High School Coach David Lipsey was hired to replace Bobo and be the first coach of Union County High School.

Union County High School's Junior ROTC program is only one of three teams in the nation to ever go four years in a row to The George C. Marshall Leadership and Academic Bowl in Washington, DC. Members of that team included Michael Leigh, Tommy McKelvey, Micheal Stewart, Lucas Kelley, Ollie Burns, and Mitchell Ward.