Winthrop University (Winthrop or WU) is a public university in Rock Hill, South Carolina. It was founded in 1886 by David Bancroft Johnson, who served as the superintendent of Columbia, South Carolina, schools. He received a $1,500 grant from Robert Charles Winthrop, a Boston philanthropist and chair of the Peabody Education Board in Massachusetts. The school was originally established in Columbia to educate young women to teach in the public schools.

Winthrop has developed into a university offering undergraduate and graduate degrees through five colleges and schools. It has enrollment of about 6,000 students. The majority of Winthrop's students are from South Carolina, with out-of-state and foreign students accounting for 13% of undergraduate enrollment. The 100-acre (40.5 ha) main academic and residential campus is located in Rock Hill, 25 miles (40 km) southwest of Charlotte, North Carolina and 71 miles (114 km) north of Columbia, South Carolina.

Fielding athletic teams known as Winthrop Eagles, the university participates in the National Collegiate Athletic Association (NCAA) at the Division I level as a member of Big South Conference. The athletic program is known for its success in volleyball, basketball, soccer, and tennis.

Winthrop University was founded In 1886, when the Peabody Education Board of Massachusetts, headed by Robert C. Winthrop, provided $1,500 to form the "Winthrop Training School" for white women teachers. That year the school opened its doors to twenty-one students in Columbia, South Carolina. Nine years later in 1895 it moved to Rock Hill. The school's name had changed in 1893 to "Winthrop Normal and Industrial College of South Carolina", reflecting its mission to prepare some students for industrial jobs.

The college was segregated until 1964. It became fully coeducational in 1974. Evolving from a training school to a college with a four-year full curriculum, it also developed a graduate division. By 1992 it reflected this development, changing its name to Winthrop University. [4] 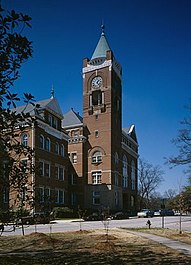 The university's campus is in the city of Rock Hill, South Carolina. The Winthrop College Historic District is listed on the National Register of Historic Places (NRHP), as are Tillman Hall and Withers Building. [5] The Winthrop University campus has its own zip code of 29733. Rock Hill has a total of five historic districts listed on the NRHP.

Winthrop's campus is divided into two distinct areas: The main campus which houses the academic buildings, residence halls, library and campus center, and the more recently constructed 317-acre (128.3 ha) Recreational and Research Complex, located about one mile northeast of the main campus.

Winthrop's main campus has had extensive development since the late 20th century. A $12 million Dalton Hall opened in 1999. [6] The Courtyard at Winthrop, which features apartment-style residences for students, opened in 2003. [7] The Lois Rhame West Health, Physical Education and Wellness Center opened in 2007; it is the new home of the University's physical education department and intramural sports. [8] The most recent addition, in 2010, is the DiGiorgio Campus Center, which added a 128,000-square-foot (11,900 m2) multi-purpose campus center. This features a 225-seat movie theater, food court, campus bookstore, post office, and casual dining. The DiGiorgio Center is connected to the West Center via an open-air plaza. 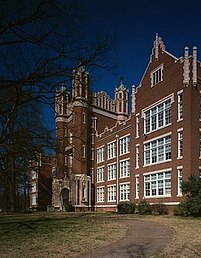 Ninety-one (91%) percent of freshman and forty-five (45%) percent of all undergraduate students live on-campus. [9]

The Research Complex hosts the Piedmont Wetlands Research Project, a golf course (open to faculty, students and alumni), and a world-class disc golf course. (This has been the site of the United States Disc Golf Championship since its opening in 1999). [10]

Winthrop's campus has served as the site for filming of numerous movies, television and other video productions, including the 2008 film Asylum (starring Sarah Roemer), and the 1999 film The Rage: Carrie 2. Additionally, the Winthrop Coliseum has hosted numerous television tapings of various syndicated television programs. 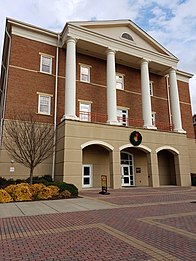 The campus police department is known as the Winthrop University Police Department. The department has 11 sworn officers [15] serving a student population of 6,109. [16]

Winthrop was ranked the #17 Regional University in the South in 2020 by US News, as well as the #8 best college for Veterans and #11 best college for teaching. [17]. Winthrop has been recognized as South Carolina's top-rated university according to evaluations conducted by the South Carolina Commission on Higher Education. [18] Winthrop has been rated by the commission as "substantially exceeding standards" every year since that classification was created in 2003. [18]

The university has 6,073 students. Undergraduate students come from 42 states and 45 countries. There are 135 undergraduate international students enrolled. [2]

The university's average size of undergraduate lecture courses is 22 students. All freshman and second-year students are required to live on campus, unless they live at home with their parents or legal guardians. [19] 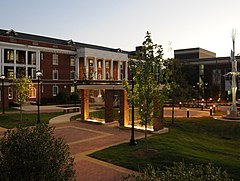 Winthrop's DiGiorgio Student Union Program Board has been ranked the best Program Board in the nation three times for the quality and variety of programming, including both lecturers and entertainers. The trade publication Campus Activities Magazine has ranked the university as having the "Best Campus Program" in the nation in 1995, 2002, 2004 and 2013. Winthrop is the only university in the nation to be on the ballot every year since this award was inaugurated in 1995. [18]

In addition to completing the academic requirements of their chosen degree, full-time Winthrop undergraduates, in order to graduate, are required to attend three cultural events for every 20 semester hours. [20] The university maintains an extensive calendar of events that qualify as being "cultural events". [21]

Cultural events are typically on a wide variety of subjects, and have included in the past:

The Johnsonian, Winthrop's independent weekly student newspaper, has been published since 1923. It's available in print on campus and digitally on MyTJNow.com. [23] In 2016, it was voted as the top student newspaper in the state of South Carolina by the S.C. Press Association. [24]

The university is a member of the National Collegiate Athletic Association (NCAA) and competes on the Division I level.

Winthrop is a charter member of the Big South Conference. [25] Winthrop's teams are known as the Eagles and their colors are garnet and gold. [26]

The university has labeled itself "The Campus of Champions" as its intercollegiate athletic teams have experienced success in recent years. Specifically, the university has won numerous Big South Conference championships in the following sports: baseball (three since 1995), men's basketball (eleven since 1988), men's cross country (two since 2000), men's soccer (six since 2002), men's tennis (four since 1997), women's tennis (20 since 1994), softball (three since 1989), women's lacrosse (two since 2015), and women's volleyball (four since 2002). [26]

At the heart of the university's athletic facilities is the Winthrop Coliseum. In addition to serving as the home venue of the men's and women's basketball and volleyball teams, the university's athletic department offices are located in the Coliseum. The arena features 6,100 permanent seats and hosts numerous non-university shows and events in addition to Winthrop athletic contests. [28] The Coliseum also served as the temporary practice site of the NFL's Carolina Panthers until completion of the team's facilities in Charlotte. [29]

The Winthrop baseball team plays at Winthrop Ballpark, a multimillion-dollar 1,989-seat baseball stadium which opened in 2003. [30]

The university's soccer teams compete at the recently completed Eagle Field. The facility features 1,800 permanent seats, a press box, field house, and a Daktronics LCD scoreboard. In addition, the playing field is a Tifway 419 hybrid Bermuda grass with Eagle Blend and Sun Star. [32]

The softball team competes at the Winthrop Softball Complex, which opened in 2001. The facility includes four fields, locker rooms, and an indoor batting cage. [33]

The tennis teams compete at the Winthrop Tennis Complex, which opened in 2003. The complex includes 12 lighted courts, seating for 300, and a clubhouse with public restroom facilities, locker rooms, and offices. [34]

On March 5, 2007, the Winthrop Eagles men's basketball team was ranked in the Top 25 of both major college basketball polls for the first time in school history. [36] The Eagles were ranked #22 in the USA TODAY/ESPN Top 25 poll and #24 on the Associated Press (AP) Top 25 poll. Later that spring on March 16, 2007 the Winthrop Eagles defeated Notre Dame for the first NCAA Men's Basketball Tournament win in school history. [37]

Seven men's basketball championships came during Gregg Marshall's tenure as head coach. He left Winthrop to become the head coach at Wichita State University. Marshall's assistant at Winthrop, Randy Peele, was named as his successor and led the Eagles to win Big South Championships in 2008 and 2010. [38]

Since the mid 1990s, the Winthrop's women's tennis team has become the dominant force in the Big South conference, winning 20 out of 25 conference tournament championships since 1994. In the 2018 NCAA Division I Women's Tennis Championship, Winthrop beat Auburn to make it past the first round for the first time in school history. [40] Lauren Proctor rose to no. 14 in national rankings during that same season. [41]