From Wikipedia, the free encyclopedia
Publisher in Atlanta, Georgia, US

Creative Loafing is an Atlanta-based publisher of a monthly arts and culture newspaper/magazine. The company publishes a 60,000 circulation monthly publication which is distributed to in-town locations and neighborhoods on the first Thursday of each month. https://creativeloafing.com/ is the website for the company and it also has a YouTube Channel featuring its video work over the years and a weekly "Live from the Archives" program featuring local musicians and bands. The company has historically been a part of the alternative weekly newspapers association in the United States.

Creative Loafing began as a family-owned business in 1972 by Deborah and Chick Eason, expanding to other cities in the Southern United States in the late 1980s and 1990s. In 2007 it doubled its circulation with the purchase of the Chicago Reader and Washington City Paper; the $40 million debt it incurred, along with an economic recession, forced the company into bankruptcy one year later. The parent company, Creative Loafing, Inc. was dissolved and Atalaya sold off the Chicago Reader. In 2012, SouthComm purchased all of the properties and then sold off each of the papers to other publishers in 2018.

The Atlanta Creative Loafing launched the career of many writers and has been an institution in Atlanta's cultural scene. The Parrotheads of Jimmy Buffett fame were launched from an ad in Creative Loafing in the 1990s. Best-selling author and American humorist Hollis Gillespie by debuting her weekly column "Moodswing," which first appeared in 2001 and ran for eight years. Jill Hannity, the wife of Sean Hannity, was the managing editor of the newspaper 1993–1996 until their move to New York City, which commenced Sean Hannity's television career.

Other newspapers the company published over its 40-year history included:

Deborah Eason, a photographer for Delta Air Lines, and Elton "Chick" Eason, a math professor at Georgia State University, founded Creative Loafing Atlanta in 1972 after the couple attended a 25-attendee Georgia State University lecture by a visiting Russian scholar. This, and other poorly attended events, convinced them to start Creative Loafing Atlanta to inform the public about all of the city’s cultural happenings—festivals, concerts, Wicca meetings. [12] They originally began publishing it from the basement of their home in the Morningside neighborhood of Atlanta. [13] After a trial run of a monthly magazine called P-s-s-t . . . A Guide to Creative Loafing in Atlanta, the Easons decided to launch a weekly free publication titled simply Creative Loafing. The four-person editorial staff operated out of the living and dining rooms of the Easons’ Morningside home; the darkroom was in the basement. The print run of the first edition—all of eight pages—was 12,000 copies. [14]

Expansion in the South 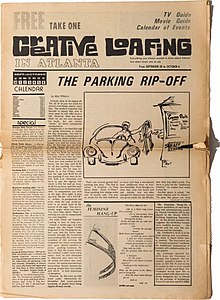 Creative Loafing wasn’t the first alternative weekly Atlanta had seen, but over the years, its size and ambitions crowded out competitors—The Great Speckled Bird; Poets, Artists & Madmen; The Sunday Paper. [16]After a decade and a half in Atlanta, the Easons established new Creative Loafing weeklies in March 1987 in Charlotte, North Carolina, [17] and in 1988 in Tampa, Florida. [13] Other expansions or acquisitions included newspapers in Greenville, South Carolina; Raleigh, North Carolina; and Savannah, Georgia. The company also expanded its footprint in the Atlanta area, starting two community weeklies, Gwinnett Loaf and Topside Loaf, covering the suburbs north of the city in Cobb, Gwinnett, southern Forsyth and northern Fulton counties. Bowing to reader complaints about racy advertisements in Creative Loafing Atlanta, the Easons established a separate Atlanta publication, The Scene, for nightlife listings. These three Atlanta-area publications would later be folded back into Creative Loafing Atlanta in 2001. [9]

Ben Eason, son of Deborah and Elton, purchased the Tampa paper from his parents in 1994 and changed its name to the Weekly Planet. In 1998 he expanded the paper and launched a second Weekly Planet in Sarasota, Florida. [19]

Two years later, in September 2000, he and his two sisters led a group of investors to purchase a controlling interest in the entire Creative Loafing chain, and subsequently brought the Planet papers into the fold. After a false start during which the May 31, 2006, edition of Tampa's Planet was prematurely published with a Creative Loafing banner, the Tampa paper officially reverted to its former name and the Sarasota paper became Creative Loafing Sarasota. [19]

To help finance the 2000 deal transferring ownership to Ben Eason's group, media conglomerate Cox Enterprises purchased a 25% minority share of the company for approximately US$5 million. In the process, Cox executives filled two seats on Creative Loafing's eight-member board. [20] An uneasy four-year relationship between the two companies followed, as Cox also owned Atlanta's only daily, The Atlanta Journal-Constitution, as well as television and radio outlets in the Atlanta area. After the Journal-Constitution in April 2003 quietly launched its own free entertainment weekly named Access Atlanta, in direct competition with Creative Loafing, the Easons and Creative Loafing board members voted to censure the two Cox executives for unethical conduct, and by June 2004 both companies agreed to allow the chain to repurchase its shares from Cox. [21] [22]

On July 24, 2007, Creative Loafing announced the purchase of the Washington City Paper and the Chicago Reader, [23] along with the Reader's properties The Straight Dope and the SDMB, the associated Internet message board.

In a bankruptcy auction on August 25, 2009, Atalaya Capital Management of New York City, emerged as the new owner, paying $5 million (it was also CL's largest creditor, owed $30 million before the bankruptcy). The Easons had put in a bid of $2.3 million, and with the change in ownership, Ben Eason was removed as CEO. [24]

Creative Loafing's three largest newspapers continued under Atalaya's ownership for one more year. In May 2012, the Chicago Reader was sold to Wrapports, publisher of the competing Chicago Sun-Times, in a deal reported at $3 million. [3] Two months later, on July 3, Creative Loafing Atlanta and the Washington City Paper were sold to SouthComm, for an undisclosed sum, and CL Inc. ceased to exist. [2]

In February, 2017, Ben Eason re-purchased Creative Loafing in Atlanta and took the publication from a weekly to a monthly as part of a plan to take the company in a direction more compatible to the new digital publishing economy.

The Creative Loafing in Tampa was sold to a group from Ohio in 2018.