Clemson ( /ˈklɛmp.sən, ˈklɛm.zən/ [3] [4] [note a]) is a city in Pickens and Anderson counties in the U.S. state of South Carolina. Clemson is home to Clemson University; in 2015, the Princeton Review cited the town of Clemson as ranking #1 in the United States for " town-and-gown" relations with its resident university. [5] The population of the city was 13,905 at the 2010 census. [6] 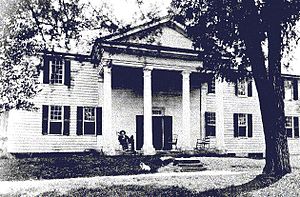 Fort Hill, photographed in 1887, was the home of Thomas Green Clemson, the founder of Clemson University.

The community was originally named Calhoun and was renamed Clemson in 1943, reflecting its identification with the university. A small, multi-block downtown has some housing, retail and restaurants.

Clemson University, founded in 1889, is a large public university that dominates the town and serves as a cultural center. Its campus developed south of the original town.

The university provides housing for students, but many students live off campus in a wide variety of apartment complexes. Outside the downtown, there are few paved sidewalks, but some streets have bike paths. U.S. Route 123 on the northern end of the city exhibits typical suburban-style shopping center developments. The city's comprehensive plan [7] has a historic preservation component to apply to keep a range of structures in the area. The Clemson (train) Depot, built in 1893, was renovated in 2001; it now houses the local chamber of commerce and visitor center. [8] The station was temporarily closed in 2016 for a road project, but was reopened in 2019. [9]

Clemson University was built on statesman John C. Calhoun's Fort Hill Plantation in 1889. The mother of Floride, Calhoun's wife, had originally purchased this estate. When she died in 1836, it passed to Floride Calhoun. (Under South Carolina law, she likely lost any individual rights to the property because of her marriage.)

In the meantime, Floride and John C. Calhoun had a daughter named Anna Maria. At age 21, she married Thomas Green Clemson. After their marriage, her father John C. Calhoun died in 1850; his widow Floride Calhoun gained total ownership of Fort Hill Plantation.

Because Anna Maria was the only living child, she inherited a part of Fort Hill when Floride died in 1866. Anna Maria bequeathed Thomas G. Clemson a portion of the property in her will. When she died in 1875, he inherited the plantation. He knew that Anna Maria had wanted to use the land to build an agricultural college, so Thomas Green bequeathed land for such a college in his will. After his death in 1888, what is now known as Clemson University was founded on that land.

Clemson has a humid subtropical climate characterized by warm, humid summers and cool, dry winters. Precipitation is relatively uniform through the year. Clemson and the rest of the Upstate of South Carolina generally receive 1 to 3 inches (25 to 76 mm) of snow annually.

The following places and buildings in Clemson are listed on the National Register of Historic Places:

In addition to Clemson University, the city is home to the South Carolina Botanical Garden, Fort Hill Plantation and Bob Campbell Geology Museum. Lake Hartwell, a reservoir, is a popular recreation area that borders the city on the west. The Blue Ridge Mountains are just 30 miles (48 km) from the city center. [13] VISITCLEMSON, the city's tourism office, offers more information on things to do in the area.

Tillman Hall at Clemson University in 2008

As of the census [1] of 2000, there were 11,939 people, 5,061 households and 2,196 families residing in the city. The population does not reflect the additional on-campus population of Clemson University, which adds roughly 17,000 additional residents for eight months of the year. [16]

There were 5,061 households, out of which 17.8% had children younger than 18 living with them, 35.2% were married couples living together, 5.9% had a female householder with no husband present and 56.6% were non-families. 28.6% of all households were made up of individuals and 7.7% had someone living alone who was 65 or older. The average household size was 2.30, and the average family size was 2.84. 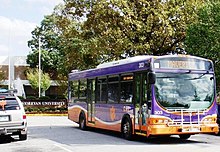 Clemson Area Transit (CAT) is a free transportation service that offers fare free service throughout the Clemson, Anderson, Pendleton and Seneca areas. All CAT buses are made accessible for patrons with disabilities and can accommodate any special needs. The CAT buses also provide transfer services to the local Electric City Transit bus in Anderson. Riders can receive vouchers from CAT bus operators in order to continue their ride fare-free on the Anderson shuttles. [17]

The city of Clemson has an AMTRAK Station at the corner of Calhoun Memorial Highway and College Avenue. [18] The Crescent Route travels from New Orleans to New York City and stops through the Clemson station (CSN). [19]

The Clemson area is near three major airports. The closest, Greenville-Spartanburg International Airport, is 45 minutes away in Greenville, South Carolina. Hartsfield-Jackson Atlanta International Airport (ATL) is two and a half hours away in Atlanta, Georgia, and The Charlotte-Douglas International Airport (CLT) is two and a half hours away, as well, in Charlotte, North Carolina. Many different services provide transportation to and from the airport from the Clemson area, including The Airport Shuttle, Anderson/Clemson Shuttle Service, Yellow Cab and Andrews Airport Services. [20]

RC Edwards was built and opened in 1971. It currently educates sixth-, seventh- and eighth-graders. The campus is between the cities of Central and Six Mile, and has about 800 students. Its colors are purple and white, and the mascot is the panther. [23]

The current D.W. Daniel High School was constructed in 2010 and had its first class enter the doors for the 2012-2013 school year. The school is named after David Wistar Daniel, a professor at Clemson University, who was invested in the public school system and spent many years on the South Carolina Board of Education. It recently was named one of the best regular public schools in the state by US News magazine. Its colors are blue and gold, and the mascot is the lion. The school is well known for its football team. [24] In the 2013-2014 season, the team ended the year 14 wins to one loss, which occurred in the 3A State Championship against Myrtle Beach High School.

The city has a City Council and participates as a member of the Pickens County Council. Clemson's senators in the United States Senate are Lindsey Graham and Tim Scott. In the House, Clemson's representative is Jeff Duncan. The state senator is Thomas C. Alexander, and the state representative is Gary Clary. [25] Clemson City Council consists of an Arts and Culture Commission, a Planning Commission, a Board of Architectural Review and a Board of Zoning Appeals. [26]

The city of Clemson also works directly with the International Town Gown Association (ITGA) that works to provide information on common issues between universities and their neighboring towns. Two Clemson representatives serve on the ITGA Executive Board: Jim Oswald, ITGA Treasurer, and Beth Bagwell, ITGA Director. [27]