From Wikipedia, the free encyclopedia
For other communities of the same name, see Abbeville (disambiguation).
City in South Carolina, United States

Famed states' rights advocate and Vice President John C. Calhoun first practiced law in Abbeville, and he was born on a farm on the outskirts [7] in what is now Mt. Carmel. [9]

Abbeville and the American Civil War

The rock at Secession Hill 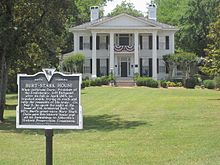 Abbeville has the unique distinction of being both the birthplace and the deathbed of the Confederacy. On November 22, 1860, a meeting was held at Abbeville, at a site since dubbed " Secession Hill", to launch South Carolina's secession from the Union; [10] [11] one month later, the state of South Carolina became the first state to secede.

At the end of the Civil War, with the Confederacy in shambles, Confederate President Jefferson Davis fled Richmond, Virginia, and headed south, stopping for a night in Abbeville at the home of his friend Armistead Burt. It was on May 2, 1865, in the front parlor of what is now known as the Burt-Stark Mansion that Jefferson Davis officially acknowledged the dissolution of the Confederate government, in the last official cabinet meeting. [10] [11]

On December 8, 2003, in a 14-hour standoff that stemmed from a land-survey dispute, two Abbeville lawmen were killed by West Abbeville resident Steven Bixby. This siege has been compared by both sympathizers of the Bixbys and law enforcement agents to the events of Waco and Ruby Ridge. [12] In February 2007, Steven Bixby was convicted on 17 counts including the two murders, as well as lesser charges of kidnapping and conspiracy. He was given two death sentences for the murders plus 125 years in prison on the other charges.

Nearby is the Sumter National Forest. [7]

Abbeville has a humid subtropical climate ( Köppen Cfa). Winters are cool, sometimes cold, and short in duration. Summers are hot and humid. The transitional seasons of spring and fall can vary in temperature but tend to be warm. In the summer highs usually peak in the mid 90s, but temperatures over 100 °F (37.8 °C) occur on occasion, most recently in the summer of 2012 during a heat wave. That year, the all-time record high of 109 °F (42.8 °C) was recorded on July 1. [24][ failed verification] In the winter highs are in the low to mid 50s and lows are right around freezing, seldom dropping below 25 °F (−3.9 °C). Precipitation is well distributed throughout the year. Afternoon thunderstorms are a common occurrence in the summer months and can bring heavy winds and lightning. Snow is rare, falling every few years. On March 31, 1973, an F4 tornado struck Abbeville and killed 7 people, making it the deadliest single tornado in 1973. [25] The area was struck by two tornadoes on April 10, 2009. No fatalities were recorded, but the majority of the city lost power and many buildings sustained significant damage. [25] [26]

Abbeville is the center of a small urban cluster with a total population of 6,038 (2000 census).

Agriculture and forestry are important industries in the area. Crops that are grown in quantities are cotton, soybeans, corn, oats, wheat, and peaches. Livestock, dairy cows, and poultry are also raised in the area. Finally textiles are the chief manufactured product, in particular, clothing. After the North American Free Trade Agreement clothing is no longer made in Abbeville. Also represented are plastic and metal products. [5] [10]

Abbeville has a public library, a branch of the Abbeville County Library System. [29]

Abbeville is the homeplace of a holiday pudding dessert called Gypsy. Gypsy consists of pound or sponge cake, boiled custard, sherry, whipping cream, and almonds. Variations of recipe substituting bourbon for sherry exist. It resembles English trifle and has been referred to as "tipsy pudding" and southern tiramisu. It is usually cooked for Thanksgiving and/or Christmas in many "old Abbeville" families. The dish is not known to exist outside of Abbeville other than in families who moved from Abbeville elsewhere. It is usually served in a special stemmed, medium-sized, decorative crystal compote. [30]

The origins of Gypsy go back to late 19th century. There is a mention of Gispy cake in 1831 edition William Kitchiner's The Cook's Oracle, which may have been a prototype for the Abbeville Gypsy. [31] A local legend tells a story of an unknown woman serving Gypsy to Confederate President Jefferson Davis at the end of the Civil War in 1865. Theresa C. Brown included a recipe for Gipsy cake in the Creams chapter of her Modern Domestic Cookery (1871). [32] [33]