Burberry is a British luxury fashion house headquartered in London, England. It currently designs and distributes ready to wear including trench coats (for which it is most famous), leather goods, footwear, fashion accessories, eyewear, fragrances, and cosmetics.

Established in 1856 by Thomas Burberry, originally focusing on the development of outdoor attire, the house has moved into the high fashion market, developing a first of its kind fabric called Gabardine, which is completely breathable and waterproof, and exclusively made for the brand. The first shop opened in the Haymarket, London, in 1891. Burberry was an independent family-controlled company until 1955, when it was reincorporated. In 2005, it completed its demerger from GUS plc, the company's former majority shareholder. [2]

The company is listed on the London Stock Exchange and is a constituent of the FTSE 100 Index. In 2015, Burberry ranked 73rd in Interbrand's Best Global Brands report, alongside Louis Vuitton and Prada. [3] [4] Burberry has stores in 59 countries. [5]

Burberry was founded in 1856 when 21-year-old Thomas Burberry, a former draper's apprentice, opened his own store in Basingstoke, Hampshire, England. [6] By 1870, the business had established itself by focusing on the development of outdoors attire. [6] In 1879, Burberry introduced in his brand the gabardine, a hardwearing, water-resistant yet breathable fabric, in which the yarn is waterproofed before weaving. [7] In 1891, Burberry opened a shop in the Haymarket, London. [6] 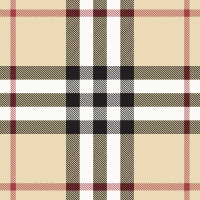 In 1901, the Burberry Equestrian Knight logo was developed containing the Latin word "Prorsum", meaning "forwards", and later registered it as a trademark in 1909. [6] In 1911, the company became the outfitters for Roald Amundsen, [6] the first man to reach the South Pole, and Ernest Shackleton, who led a 1914 expedition to cross Antarctica. A Burberry gabardine jacket was worn by George Mallory on his attempt on Mount Everest in 1924. [8]

Adapted to meet the needs of military personnel, the " trench coat" [6] was born during the First World War due to its being worn by British officers in the trenches. After the war, it became popular with civilians. The Burberry check has been in use since at least the 1920s, primarily as a lining in its trench coats. [6] Burberry also specially designed aviation garments. In 1937, A. E. Clouston and Betty Kirby-Green broke the world record for the fastest return flight from London to Cape Town in The Burberry airplane that was sponsored by the brand. [9] Burberry was an independent family-controlled company until 1955, when Great Universal Stores (GUS) assumed ownership. [10]

Influences and rise to prominence

Stars of the modern world began wearing the Burberrys brand. During the 1970s and 1980s, Burberry signed agreements with worldwide manufacturers to produce complementary products to the existing British collection such as suits, trousers, shirts, sportswear, accessories, for men, ladies, and children. These products, designed under the strict control of headquarters in London, were produced and distributed through independent retail stores worldwide as well as the Burberry stores, and contributed to the growth of the brand in sales and profits through to the late 90s, although the full extent of sales was not apparent in the parent company accounts since much was done through licensed agreements. The company had signed Lord Litchfield as photographer, Lord (Leonard) Wolfson was Chairman and Stanley Peacock OBE Managing Director. [11] In 1997, GUS director Victor Barnett became chairman of Burberry, hiring Rose Marie Bravo to execute a corporate reorganization and restoration of the brand as a luxury fashion house. [12] Barnett led the company up to its successful IPO in 2001. [13]

Between 2001 and 2005, Burberry became associated with " chav" and football hooligan culture. This change in the brand reputation was attributed to lower priced products, the proliferation of counterfeit goods adopting Burberry's trademark check pattern, and adoption by celebrities prominently identified with "chav" culture. The association with football hooliganism led to the wearing of Burberry check garments being banned at some venues. [17] GUS divested its remaining interest in Burberry in December 2005. [18] [19] Burberry Group plc was initially floated on the London Stock Exchange in July 2002. In 2005, Sanyo-shokai was the Burberry ready-to-wear licence holder in Japan with retail value of €435 million. [20]

In 2006, Rose Marie Bravo, who as chief executive had led Burberry to mass market success through licensing, decided to retire. [21] She was replaced by another American, Angela Ahrendts, [22] who joined from Liz Claiborne in January 2006, and took up the position of CEO on 1 July 2006. Ahrendts and Bailey successfully turned around the then chav-like reputation that the brand had acquired at the end of Bravo's tenure and cheapening effect of the brand's omnipresence, by removing the brand's check-pattern from all but 10% of the company's products, taking the fragrance and beauty product licenses back in-house and buying out the Spanish franchise that was worth 20% of group revenues. [23] [14] [24] [25] 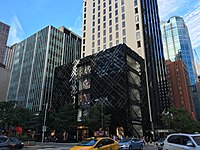 Burberry Chicago flagship store on the Magnificent Mile, built in 2012.

In October 2013, it was announced that Ahrendts would take up the position of Senior Vice President of retail and online at Apple, Inc. from April 2014, and be replaced as CEO by Bailey. [28] During her tenure, sales increased to over £2 billion, and shares gained more than threefold to £7 billion. [29] Burberry promotes its British connection; according to The Guardian, a British national daily newspaper, as of July 2012, Burberry maintains two production facilities in Great Britain, one in Castleford producing raincoats, and one in Keighley. [30] In spring 2014, fashion designer Christopher Bailey became CEO of Burberry and retained the role as chief creative officer. [28] His basic salary was £1.1m, with total compensation of up to £10m a year depending on sales targets being met. [31]

In July 2016, it was announced that Celine boss Marco Gobbetti would become CEO of the FTSE 100 Company, while Christopher Bailey became the Creative Director and President. [32] In 2016, the label launched its "Mr Burberry" fragrance. [33] In 2016, Burberry had an increase in reported profits, with 77 per cent of sales coming from Burberry's stores. The increase was in part attributed to strong sales in Asia. In early May 2017, the store announced it was moving 300 employees from London to Leeds. In July 2017, Gobbetti replaced Bailey as CEO. [33] In March 2018, Burberry named Riccardo Tisci as the brand's chief creative officer effective 12 March. [34] A few months later, Tisci presented a new logo and monogram for the brand, designed by the English graphic designer Peter Saville. [35] [36]

In April 2018, it was announced that Sir John Peace would be stepping down as chairman of the board and be replaced by Gerry Murphy. Murphy had served as CEO of Kingfisher plc, as well as being current chairman of Tate and Lyle and The Blackstone Group International Partners LLP. Peace's departure marks a change in leadership for the group with Gobetti and Ahrends having left the previous years. [37]

In May 2018 it was reported that Burberry had filed a lawsuit against Target claiming that Target had copied its check print designs and was seeking amount of $2 million, in addition to the amount to cover its legal fees. [38]

In July 2018 it was reported that in the previous past five years Burberry had destroyed unsold clothes, accessories and perfume worth over £90m in order to protect its brand and prevent the items being stolen or sold cheaply. While a representative of Greenpeace criticised the decision, Burberry claimed that the energy generated from burning its products was captured, making it environmentally friendly. [39] According to Burberry's annual report, by the end of the financial year 2018, the company had destroyed goods worth £28.6m, an increase on the £26.9m from its financial year 2017. [40] In September 2018, Burberry reported that it would stop the practice of burning unsold goods, with immediate effect. Burberry also announced it would stop using real fur in its products, and would phase out existing fur items. [41]

In February 2019 Burberry apologized for showcasing a hoodie that featured a noose around the neck during its show at London Fashion Week. The retailer said it has removed the item from its collection, after criticism from one of its own models led to an online backlash. [42] In February 2020 Burberry was forced to close 24 of its 64 Chinese mainland stores because of the Coronavirus. [43]

Rainbow cape by Christopher Bailey for Burberry on display in The Met's exhibit Camp: Notes on Fashion