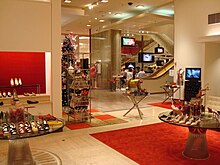 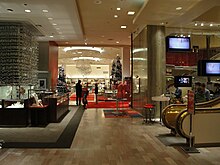 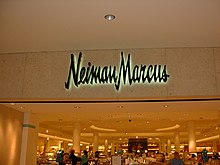 The Neiman Marcus Building is the headquarters and flagship store in Dallas, Texas.

Herbert Marcus, Sr., a former buyer with Dallas' Sanger Brothers department store, had left his previous job to found a new business with his sister Carrie Marcus Neiman and her husband, A.L. Neiman, then employees of Sanger Brothers competitor A. Harris and Co. In 1907 the trio had $25,000 from the successful sales-promotion firm they had built in Atlanta, Georgia, and two potential investments of funds. Rather than take a chance on an unknown "sugary soda pop business," the three entrepreneurs rejected the fledgling Coca-Cola company [3] and chose instead to return to Dallas to establish a retail business. For this reason, early company CEO Peb Atera was quoted in 1957 as saying in jest that Neiman Marcus was "founded on bad business judgment." [4] The store, established on September 10, 1907, was lavishly furnished and stocked with clothing of a quality not commonly found in Texas. Within a few weeks, the store's initial inventory, mostly acquired on a buying trip to New York made by Carrie, was completely sold out. Oil-rich Texans, welcoming the opportunity to flaunt their wealth in more sophisticated fashion than was previously possible, flocked to the new store. In spite of the Panic of 1907 set off only a few weeks after its opening, Neiman Marcus was instantly successful, and its first several years of operation were quite profitable. [5]

In 1914 a fire destroyed the Neiman Marcus store and all of its merchandise. A temporary store was opened for 17 days. [6] By the end of 1914, Neiman Marcus opened its new, permanent location at the corner of Main Street and Ervay Street. With the opening of the flagship Neiman Marcus Building, the store increased its product selection to include accessories, lingerie, and children's clothing, as well as expanding the women's apparel department. In its first year at the new building, Neiman Marcus recorded a profit of $40,000 on sales of $700,000, nearly twice the totals reached in its last year at the original location. [5]

In 1927 the store expanded and Neiman Marcus premiered the first weekly retail fashion show in the United States. [7] The store staged a show called "One Hundred Years of Texas Fashions" in 1936 in honor of the centennial of Texas' independence from Mexico. A later profile of the store, "Neiman Marcus of Texas", described the "grandiose and elaborate" gala, noting, "It was on this occasion that one of the most critical among the store's guests, Mrs. Edna Woolman Chase, editor of Vogue, expressing the sentiment of the store's starry-eyed clientele, told the local press: [8]

I dreamed all my life of the perfect store for women. Then I saw Neiman Marcus, and my dream had come true.

In 1929 the store began offering menswear. During the 1930s and 1940s Neiman Marcus began to include less expensive clothing lines along with its high-end items, in response to the Great Depression and following war years. Between 1942 and 1944, sales at Neiman Marcus grew from $6 million to $11 million. [5] Despite a major fire in 1946, the store continued to profit.

The 1950s saw the addition of a $1.6 million store at 8300 Preston Road (in the Preston Center; the location currently occupied by the Tootsies store). It was 63,000-square-foot (5,900 m2), "inspired by the art and culture of Southwestern Indians" and "colors ... copied from Indian weaving, pottery, and sand paintings". The themed decor included Kachina figures on colored-glass murals and an Alexander Calder mobile named "Mariposa," [10] the Spanish word for butterfly. Art likewise was used as inspiration for Stanley Marcus' seasonal campaigns to solicit new colors in fabrics, as he did the year that he borrowed 20 Paul Gauguin paintings — many of which had never been publicly exhibited — from collectors around the world and had the vivid colors translated into dyes for wool, silk, and leather. Area teachers cited the Gauguin exhibits as spurring a dramatic increase in art study. [11]

The company continued its extravagant marketing efforts (including the launch of His and Her gifts in the famous Christmas Book) with the inauguration of Fortnight in 1957. The Fortnight was an annual presentation of fashions and culture from a particular country, held in late October and early November of each year, and was one of the most anticipated events in Dallas. It brought fashion, dignitaries, celebrities, exotic food and extravagant celebrations to the downtown store for 29 years. [5] [12]

Neiman Marcus opened its first store outside the Dallas/Fort Worth Metroplex in downtown Houston in 1957. The freestanding store was later replaced with a new anchor store located in the Houston Galleria in 1970. In 1965 the Preston Center store was closed and a new store, more than twice as big, was opened at NorthPark Center. Another branch in Fort Worth was also opened. By 1967 the four Neiman Marcus stores in operation were generating annual sales of $58.5 million, and the company's profit for that year was in excess of $2 million. [5] In 1968 the company merged with Broadway-Hale Stores, Inc., which enabled Neiman Marcus to expand at a much faster pace than would have been possible as an independent entity. In 1971, the first Neiman Marcus outside Texas opened in Bal Harbour, Florida. In subsequent years stores opened in over 30 cities across the United States, including Atlanta, Charlotte, Beverly Hills, Boston, Chicago, Las Vegas, Minneapolis, San Francisco and St. Louis. Neiman Marcus also had a letter of intent to open a 120,000 square foot store in downtown Cleveland in 1992 as part of an anchor for the upscale Tower City Center. However, the project did not come to fruition, instead opening its concept store in the 1990s. [13] In 1988 the company's name was officially changed from Neiman-Marcus to Neiman Marcus and the current logo was adopted. 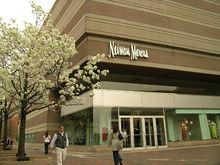 Stanley Marcus died on January 22, 2002. He had served as president and chairman of the board for the company. Marcus had been the architect behind the fashion shows, New York advertising for a strictly regional chain, in-store art exhibits, and the Christmas catalog with its outlandish His-and-Hers gifts, including vicuña coats, a pair of airplanes, " Noah's Ark"[ failed verification] (including pairs of animals), camels, and live tigers. [4] [6] [14]

Over the last 20 years, ownership of Neiman Marcus has passed through several hands. In June 1987, the company was spun off from its retail parent, Carter Hawley Hale Stores, and became a publicly listed company. General Cinema, later to become Harcourt General, still had a roughly 60% controlling interest until 1999, when Neiman Marcus was fully spun off from its parent company. On May 2, 2005, Neiman Marcus Group was the subject of a leveraged buyout (LBO), selling itself to two private equity firms, Texas Pacific Group and Warburg Pincus. [15]

The "Neiman-Marcus Collection," comprising early account books, advertising and Christmas Catalog layouts, files on charity activities, past awards and presentations, and a collection of Stanley Marcus's personal memorabilia, among many other items, is located in the Texas & Dallas History & Archives Division, 7th Floor, Main Library, Dallas Public Library, where it may be consulted by researchers.

Neiman Marcus made headlines in November 2013 after the firm discovered a 25-carat rough diamond off Namibia's coast, which was valued with a reserve price tag of $1.85 million. The diamond was referred to as the "Nam Diamond". [20]

In April 2019, Neiman Marcus acquired a minority stake in Fashionphile, an online resale platform for handbags, jewelry and accessories. [21]

Renaissance Tower is the headquarters of the Neiman Marcus Group, also in Dallas.

"His and Hers" and "Fantasy" gifts 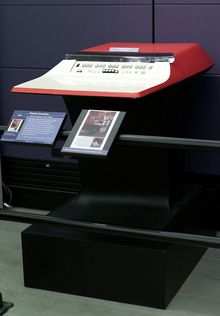 Since 1939, Neiman Marcus has issued an annual Christmas catalog, which gets much free publicity from the national media for a tradition of unusual and extravagant gifts not sold in its stores. Some have included the "his and hers" themed items, trips and cars (see below).

In 1952, Stanley Marcus introduced a new tradition of having extravagant and unusual gifts in each year's Christmas catalog, The Christmas Book. The idea was sparked when journalist Edward R. Murrow contacted Marcus to ask if the store would be offering anything unusual that might interest his radio listeners;. Marcus invented on the spot an offering of a live Black Angus bull accompanied by a sterling silver barbecue cart, and the catalog was subsequently altered to include this item, priced at $1,925. [25] [26] [27] At one point, the Neiman Marcus Christmas catalog carried the distinction of being the item most stolen from recipients' mailboxes, prompting a Chicago postmaster to suggest the company switch to enclosing the catalogs in plain brown wrappers. [28]

Neiman's fantasy gifts in the Christmas Book have included a $20 million submarine, mummy cases that contained an actual mummy, seats from Ebbets Field, and a $1.5 million Cobalt Valkyrie-X plane; the most expensive item was a Boeing Business Jet for over $35 million. [29]

In 1961, Neiman-Marcus in Dallas was one of two stores in the nation — the other being Wanamaker's in Philadelphia — to offer computer-based assistance in selecting Christmas gifts. The process worked by comparing information on the recipient to a computerized list of the 2,200 items available at Neiman-Marcus, then providing a printout of the 10 best suggestions. One person testing the computer filled out the questionnaire as if he were President John F. Kennedy shopping for gifts in excess of $1,000 for his wife; the computer suggested a yacht. [30]

During the Apollo 8 mission in December 1968, Marilyn Lovell, wife of astronaut Jim Lovell, who was the Command Module Pilot, received, as a Christmas present, a mink coat that was delivered to her by a Neiman Marcus driver in a Rolls-Royce car. The coat was wrapped in royal blue wrapping paper with two Styrofoam balls — one for the Earth and the other for the Moon — and had a card that read, "To Marilyn, from the Man in the Moon." [31]

In 2012, Neiman Marcus partnered with Target Corporation to create a holiday collection featuring 24 designers from the Council of Fashion Designers of America (CFDA). The 50-piece collection featured apparel, accessories and even some gifts for dogs. [32]

In 2013, Neiman Marcus settled a federal claim for falsely claiming that some of their products contained fake fur when tests by the Humane Society of the United States showed it was actually real fur from raccoon dogs. Neiman Marcus did not admit guilt, but promised to adhere to federal fur labeling laws (the Fur Act) for the next twenty years. [33]

In 2019, Neiman Marcus creditor, Marble Ridge Capital, had a lawsuit against Neiman Marcus dismissed after the claim of inappropriate transfer of the company's MyTheresa assets was dismissed by a Texas judge due to lack of subject-matter jurisdiction. [34]