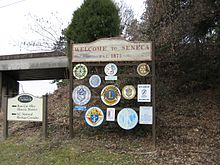 Seneca was founded as Seneca City and named for a nearby Native American village and the Seneca River. The town was located at the intersection of the Blue Ridge Railroad and the newly built Atlanta and Charlotte Air Line Railroad. Both lines are now part of the Norfolk Southern Railway. A. W. Thompson and J. J. Norton, who were locating engineers for the Air Line Railroad, purchased the land from Col. Brown of Anderson, South Carolina. A stake marking the center of town was driven into the intersection of the railroad tracks and the current Townville Street. The land was divided into lots for one-half mile from the stake. An auction was held on August 14, 1873. The town was given a charter by the state legislature on March 14, 1874. In 1908, the name was changed to Seneca.

Old Cotton Warehouse. The right hand section of the warehouse burned in April 2008 and has been torn down.

Seneca developed as a marketing and shipping point for cotton. During the harvest, wagons bringing cotton would line up for blocks from the railroad station. A passenger terminal, several hotels, and a park were built near the railroad tracks. Recently, this park was named the Norton-Thompson Park in honor of its founders.

The first school was built in 1874. The community was the home of the Seneca Institute - Seneca Junior College, which was an African-American school from 1899 to 1939.

Westpoint Stevens Plant, January 2008. Demolition of the mill began in the spring of 2008.

Textile mills came into the area with the construction of a plant-and-mill village by the Courtenay Manufacturing Company in Newry on the Little River in 1893. W.L. Jordon built another textile plant and mill village east of Seneca. This village has been called Jordania, Londsdale, and Utica as the ownership of the plant changed. The J. P. Stevens Plant, which was later called the Westpoint Stevens Plant, was a large integrated textile mill built on Lake Hartwell. Many other textile mills came to the area. These plants were the main industry for Seneca for the first half of the twentieth century. These textile mills are now closed.

With the construction of Lake Hartwell in 1963, Lake Keowee in 1971, and Lake Jocassee in 1974, Seneca and the area saw dramatic changes. The Oconee Nuclear Station was built on Lake Keowee. The recreation provided by the lakes and other attractions such as nearby Clemson University brought many retirees from other parts of the country. Retirement communities have been built in the area. [6] [7]

Early on April 13th, 2020, a high-end EF3 tornado struck residential areas of south and east of Seneca. Many buildings were damaged or destroyed and one person were killed. [8]

In and around Seneca, there are a number of historic buildings and districts that are on the National Register of Historic Places: [9]

Seneca City Hall is located on North First Street, in the center of the historic (downtown) area of Seneca. North First Street is also Highway 123 Business. The City Hall Complex is also the location of the Seneca Police Dept, Seneca Light and Water, as well as the offices of the Mayor and City Administrator.

Seneca Fire Department is housed on West South Fourth Street, in a new complex. The Fire House is just across the street from the Shaver Complex that houses the Shaver Civic Center, and the sports fields for the Seneca Recreation Department, as well as a park for smaller children, and a rubberized soft walking track.

Seneca has a lending library, a branch of the Oconee County Public Library. [21] It was also the headquarters of the National Council of Examiners for Engineering and Surveying (NCEES), the council that deals with the examination for engineers and surveyors until the NCEES moved to Greenville in June 2020.