The Kaibab Plateau is an island surrounded by lower elevations. The plateau, with elevation up to 9,215 feet (2,800 m) is bordered on the south by the Grand Canyon, on the east and the west by tributary canyons of the Colorado River, and on the North by tiers of uplifted cliffs.

The climate of the North Kaibab, which encompasses the Kaibab Plateau, is a snowy highland climate, qualifying as Dsb/Csb under the Köppen climate classification, a type often described as Continental climate. There are two weather stations in this area: Jacob Lake, which is near the center of the plateau, and Bright Angel Ranger Station, which is located at a more southerly location and is higher in altitude. The higher altitude is reflected in Bright Angel's cooler temperatures and increased precipitation versus Jacob Lake. Using the 0 °C (32 °F) isotherm between temperate and continental climates preferred by some climatologists, Bright Angel Ranger Station is Dsb, the dry-summer version of the warm summer humid continental climate. The North Kaibab is unusual for either a Csb or Dsb climate, featuring lower precipitation in early summer, with July and August being wetter (courtesy of the North American Monsoon). This is followed by a slightly drier period during the autumn months, and then a wetter period from December to March. Summers in this area feature warm days and cool nights. Winters are chilly, especially at night, and snowy. Jacob Lake averages 105 inches (270 cm) of snow per annum, and Bright Angel Ranger Station 135 inches (340 cm).

Panorama of Scholz Lake in the Williams Ranger District

Pack mule train along the South Kaibab Trail in the Grand Canyon, carrying camping supplies following the riders on day 2 outbound of a tourist excursion, on 31 March 2009, 13:51 hrs.

Vegetation in the forest varies by elevation and exposure. Principal tree species are ponderosa pine, Douglas-fir, Engelmann spruce, aspen, blue spruce, oak, pinyon pine, and juniper. Among other things, they enhance the beauty of the landscape, hold soil in place, and provide cover and food for wildlife. As elevation decreases, trees give way to bitterbrush, Gambel oak, sagebrush, and cliffrose. Within the forest, there are irregular areas entirely free of tree growth.

Commonly seen large wild animals include white-tailed deer, mule deer, elk, pronghorn, wild turkey and coyote. Cougar, bobcat, and black bear are seen less frequently. Bison that live in the forest and national park are owned by the state of Arizona that issues hunting permits within the national forest. Bison were introduced to northern Arizona in the early 1900s as part of a ranching operation to crossbreed them with cattle. [3] 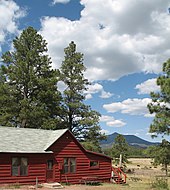 The historic Spring Valley Cabin, near Parks, Arizona in the Williams Ranger District, is available for rentals through the "Rooms with a View" Arizona Cabin Rental Program. The cabin was built in 1917. It served as the residence for rangers who worked at the guard station. The bunkhouse was the original office. [4]

Located one mile south of the Grand Canyon, Hull Cabin is the oldest surviving historic cabin near the Grand Canyon’s south rim. This rustic cabin was built in 1889 as part of a sheep ranch, and was acquired by the Forest Service in 1907 for use as a ranger station. In 1985, the cabin was listed in the National Register of Historic Places. Hull Cabin is also available for rentals through the "Rooms with a View" program. [5]