As of 2017, P. c. cougar was recognised as being valid by the Cat Classification Taskforce of the Cat Specialist Group. P. c. costaricensis had been regarded as a subspecies in Central America. [2] [5]

The North American cougar has a solid tan-colored coat without spots and weighs 25–80 kg (55–176 pounds). [6] Females average 50 kg (110 lb), about the same as a jaguar in the Chamela-Cuixmala Biosphere Reserve on the Mexican Pacific coast. [4]

The North American cougar lives in various places and habitats. [6] Several populations still exist and are thriving in the Western United States, Southern Florida, and Western Canada, but the North American cougar was once commonly found in eastern portions of the United States. It was believed to be extirpated there in the early 1900s. In Michigan, it was thought to have been killed off and extinct in the early 1900s. Today there is evidence to support that cougars could be on the rise in Mexico and could have a substantial population in years to come. Some mainstream scientists believe that small relict populations may exist (around 50 individuals), especially in the Appalachian Mountains and eastern Canada. [7] Recent scientific findings in hair traps in Fundy National Park in New Brunswick have confirmed the existence of at least three cougars in New Brunswick. [7] The Ontario Puma Foundation estimates that there are currently 850 cougars in Ontario.

Sightings in the eastern United States

Reported sightings of cougars in the eastern United States continue today, despite their status as extirpated.

While the origins of these animals are unknown, some cougar experts believe some are captive animals that have been released or escaped. [14]

A cougar in the snow at North Cedar Brook in Boulder, Colorado, the USA

The North American cougar usually hunts at night and sometimes travels long distances in search of food. Its average litter size is three cubs. [6] It is fast, and can maneuver quite easily and skillfully. [5] Depending on the abundance of prey such as deer, it shares the same prey as the jaguar in Central or North America. [15] Other sympatric predators include the grizzly bear and American black bears. [16] Cougars are known to prey on bear cubs. [17]

Rivalry between the cougar and grizzly was a popular topic in North America. Fights between them were staged, and those in the wilderness were recorded by people, including Natives. [18] 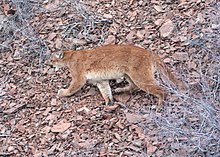 Even though conservation efforts of the cougar have decreased against the "more appealing" jaguar, it is hunted less frequently because it has no spots, and is thus less desirable to hunters. [5]