Mount Ritter and Banner Peak along the John Muir Trail 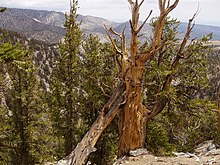 The Shulman grove of Bristlecone pines

Inyo National Forest is a United States National Forest covering parts of the eastern Sierra Nevada of California and the White Mountains of California and Nevada. The forest hosts several superlatives, including Mount Whitney, the highest point in the contiguous United States; Boundary Peak, highest point in Nevada; and the Ancient Bristlecone Pine Forest that protects the oldest trees in the world. The forest, encompassing much of Owens Valley, was established by Theodore Roosevelt as a way of sectioning off land to accommodate the Los Angeles Aqueduct project in 1907, making the Inyo National Forest one of the least wooded forests in the United States' system. [4]

The Inyo National Forest was named after Inyo County, California, in which much of the forest resides. The name "Inyo" comes from a Native American word meaning "dwelling place of the great spirit". [7]

The forest spans parts of Inyo, Mono, Tulare, Fresno and Madera counties in California, and Esmeralda and Mineral counties in Nevada.

The forest's headquarters are in Bishop, California, with ranger district offices in Bishop, Lee Vining, Lone Pine, and Mammoth Lakes. [8] The forest was established on May 25, 1907. On July 1, 1945 land from the former Mono National Forest was added. [9]

There are nine wilderness areas lying within Inyo NF that are part of the National Wilderness Preservation System. Some of these extend into other National Forests, as indicated:

The forest also harbors an estimated 238,000 acres (963 km2) of old-growth forests. [13] The most abundant trees in these forests are lodgepole pine (Pinus contorta) and Jeffrey pine (Pinus jeffreyi).

Inyo National Forest also served as the filming location for the second half of the second episode in the BBC's Walking with Monsters (2005) documentary series, which was set in Early Permian Germany.

Popular within Inyo National Forest are: