Mesa ( /ˈmeɪsə/ MAY-sə) is a city in Maricopa County, in the U.S. state of Arizona. It is a suburb about 20 miles (32 km) east of Phoenix in the East Valley section of the Phoenix Metropolitan Area. It is bordered by Tempe on the west, the Salt River Pima-Maricopa Indian Community on the north, Chandler and Gilbert on the south along with Queen Creek, and Apache Junction on the east.

Mesa is the largest suburban city by population in the United States, [5] the third-largest city in Arizona after Phoenix and Tucson, the 35th-largest city in the US, and the largest city that is not a county seat. The city is home to 518,012 people as of 2019 according to the Census Bureau, which makes it more populous than Minneapolis, St. Louis, or Miami. Mesa is home to numerous higher education facilities including the Polytechnic campus of Arizona State University. It is also home to the largest relief airport in the Phoenix area, Phoenix-Mesa Gateway Airport, which is in the southeastern corner of the city.

The history of Mesa dates back at least 2,000 years to the arrival of the Hohokam people. The Hohokam, whose name means "All Used Up" or "The Departed Ones", built the original canal system. The canals were the largest and most sophisticated in the prehistoric New World. Some were up to 90 feet (27 m) wide and 10 feet (3.0 m) deep at their head gates, extending for as far as 16 miles (26 km) across the desert. By A.D. 1100 water could be delivered to an area over 110,000 acres (450 km2), transforming the Sonoran Desert into an agricultural oasis. By A.D. 1450, the Hohokam had constructed hundreds of miles of canals many of which are still in use today. [6]

After the disappearance of the Hohokam and before the arrival of the early settlers little is known, as explorers did not venture into this area. By the late 19th century near present-day Mesa, U.S. Army troops relocated the Apache, opening the way for settlement. [7]

Mormon pioneer Daniel Webster Jones, with Henry Clay Rogers as his right-hand man, left St. George, Utah in March 1877. Jones had been asked by Mormon officials to direct a party of people in establishing a settlement in Arizona. They traveled south and settled on the north side of the present Mesa area. This settlement was initially known as Fort Utah and later as Jonesville. It was located about where Lehi Road is now. In 1883 it was named Lehi at the suggestion of Brigham Young, Jr. [8]

About this same time, another group dubbed the First Mesa Company arrived from Utah and Idaho. Their leaders were named Francis Martin Pomeroy, Charles Crismon, George Warren Sirrine and Charles I. Robson. Rather than accepting an invitation to settle at Jones' Lehi settlement, they moved up onto the mesa that serves as the city's namesake. They dug irrigation canals and used some of the original Hohokam canals. By April 1878, water was flowing through them. [9] The Second Mesa Company arrived in 1879 and settled to the west of the First Mesa Company because of more available farmland. This settlement was called originally called Alma and later Stringtown. It was located about where Alma School Road is now. [10]

On July 17, 1878, Mesa City was registered as a 1-square-mile (2.6 km2) townsite. The first school was built in 1879. In 1883, Mesa City was incorporated with a population of 300 people. Dr. A. J. Chandler, who would later go on to found the city of Chandler, worked on widening the Mesa Canal in 1895 to allow for enough flow to build a power plant. In 1917, the city of Mesa purchased this utility company. The revenues from the company provided enough for capital expenditures until the 1960s. During the Great Depression, WPA funds provided paved streets, a new hospital, a new town hall and a library. [11]

After the founding of the city the elected official that most impacted the municipality was George Nicholas Goodman. He was mayor 5 different times [12] in parts of 3 different decade (1938–1942, 1946–1948, 1952–1956) (see: List of mayors of Mesa, Arizona). As mayor he was directly involved in the process of acquiring land for both Falcon Field and Williams Field. [12]

With the opening of Falcon Field and Williams Field in the early 1940s, more military personnel began to move into the Mesa area. With the advent of air conditioning and the rise of tourism, population growth exploded in Mesa as well as the rest of the Phoenix area. Industry—especially early aerospace companies—grew in the 1950s and 1960s. As late as 1960, half of the residents of Mesa made a living with agriculture, but this has declined substantially as Mesa's suburban growth continued on track with the rest of the Phoenix metro area. [13]

Mesa employs a grid system for street numbering that is different from that used in Phoenix and other portions of the metropolitan area. Center Street, running north to south, bisects Mesa into eastern and western halves and serves as the east and west numbering point of origin within Mesa. Streets west of Center St., such as W. University Drive or W. Main St. are considered to be in West Mesa, whereas streets east of Center St., such as E. University or E. Main St., are considered to be in East Mesa. [18]

Country Club Drive, running north to south and bisecting Mesa into east and west sections, is located 0.5 miles (800 m) west of Center St, and serves as the jurisdictional boundary between Arizona's 5th and 6th congressional districts. [20] Note that this same road (as Arizona Avenue) serves as the official east and west numbering point of origin within the city of Chandler, located south of Mesa.

According to the 2010 Census, the racial composition of Mesa was as follows: [24]

According to the city's 2019 Comprehensive Annual Financial Report, [25] the top employers in the city are: 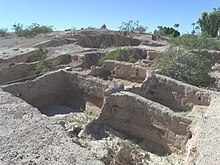 Numerous properties in the city are considered to be historical and have been included either in the National Register of Historic Places [26] or the listings of the Mesa Historic Properties.

Mesa has over 2,280 acres of parkland in the city limits. Its largest is Red Mountain Park which spans 1,146 acres. It includes a lake, playgrounds, a basketball court and a cement volleyball court. [27]

Mesa is home to numerous championship golf courses, including the original course in town, Mesa Country Club. [28] This course was founded in the late 1940s by the original leaders of the town, and "Country Club Drive", the most prominent street in Mesa, was at one point the modest entrance to the club.[ citation needed]

The Fiesta Mall is located in West Mesa, and owned by Westcor. Its anchors are Sears and Best Buy. It is located near several shopping centers, Mesa's Bank of America, [29] and other retail stores, banks, and restaurants. An expansion of the mall has been planned. [30]

Mesa Riverview is a new outdoor destination retail center in the northwestern corner of the city, near Loop 202 and Dobson Road. At build-out the center will include 1,300,000 square feet (120,000 m2) of retail space. [31] Its anchors include Bass Pro Shops, Cinemark Theaters, Wal-Mart, and Home Depot.

Pilgrim Lutheran School is a Christian Pre-K-8 school of the Wisconsin Evangelical Lutheran Synod in Mesa. [34]

Mesa is home to Mesa Community College, the largest of the Maricopa Community Colleges, which enrolls over 24,000 full and part-time students. The Polytechnic campus of Arizona State University lies in southeast Mesa. This satellite campus enrolls over 6,000 undergraduate and graduate students in scientific and engineering fields. A. T. Still University operates an Osteopathic Medical School in Mesa. The aviation school CAE Global Academy Phoenix is located in Mesa. 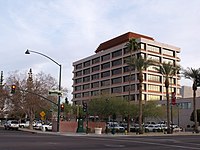 Several area freeways serve the Mesa area, such as U.S. Route 60, locally known as the Superstition Freeway, which runs between Apache Junction and Phoenix. It is also served by SR 87 and bypass loops Loop 101, which skirts the western city limits as the Price Freeway, and Loop 202, which bypasses the city on the north and east. The main east–west arterial road in Mesa is Main Street (former US 60/70/80/89), serving Downtown Mesa. The primary north–south arterials include Country Club Drive, Gilbert Road, and Power Road.

Public transportation in Mesa is provided by Valley Metro via bus and light rail ( Valley Metro Rail). The light rail section in Mesa spans about four miles from Sycamore/Main St in the west of the city, through downtown to Mesa Dr/Main St. Until July 2008, Mesa was the largest U.S. city with no public transit service on Sundays, but now has Sunday service available on Routes 40-Apache/Main, 61-Southern, 96-Dobson, 108-Elliot, 112-Country Club/Arizona, 156-Chandler/Williams Field, and 184-Power. Up to the final years of Southern Pacific passenger railroad service, the Sunset Limited passenger train used to make stops in Mesa. [37]

Air service in the city is provided by two airports. Falcon Field, located in the northeastern part of the area, was established as a training field for British RAF pilots during World War II and was transferred to the city at the end of the war. Falcon Field has 605 aircraft based there. [38] Boeing builds the AH-64 Apache attack helicopter at a facility adjoining Falcon Field. Phoenix-Mesa Gateway Airport is located in the far southeastern area of the city, and provides alternate but limited air service when compared to Sky Harbor International Airport. Phoenix-Mesa Gateway was formerly Williams Gateway Airport, and before that, Williams Air Force Base, which closed in 1993. Williams Gateway was announced as a new Focus City for Allegiant Air. Service started October 25, 2007.

See also: Bibliography of the history of Mesa, Arizona