Casa Grande ( O'odham: Wainom Wo:g) is a city in Pinal County, approximately halfway between Phoenix and Tucson in the U.S. state of Arizona. According to U.S. Census estimates, the population of the city is 58,632 as of 2019. [2] It is named after the Casa Grande Ruins National Monument, which is actually located in Coolidge. "Casa Grande" is Spanish for "big house". Among resident English speakers, there is no consensus on how to pronounce the city's name. [4]

Casa Grande was founded in 1879 by The Garza Family during the Arizona mining boom, specifically due to the presence of the Southern Pacific Railroad. In January 1880, the community of Terminus, meaning "end-of-the-line," was established despite consisting of just five residents and three buildings. [5] In September 1880, railroad executives renamed the settlement Casa Grande, after the Hohokam ruins at the nearby Casa Grande Ruins National Monument. Casa Grande grew slowly, and suffered several setbacks both in 1886 and 1893, when fires ravaged the town, destroying all wooden housing structures within it. [5] When the mining boom slowed in the 1890s, the town was nearly abandoned, but with the advent of agriculture, the town remained alive and well, and was eventually incorporated in 1915. [5]

One of the founding fathers of Casa Grande was Thompson Rodney Peart. Peart Road, Peart Park, and the Peart Center, all of which are notable fixtures of Casa Grande, are named after him.

Casa Grande was home to a collective farm society which was part of the New Deal.

According to historian David Leighton, during World War II, from 1942 to 1945, a Japanese-American relocation camp was set up outside of Casa Grande, known as the Gila River War Relocation Center. Two notable people that were interned there were future actor Pat Morita and baseball player Kenichi Zenimura, who constructed a baseball field and set up a league in the relocation camp. [6]

During the Cold War, Casa Grande was the location of the Corona Satellite Calibration Targets. These targets consisted of concrete arrows located in and to the south of the city, which calibrated satellites of the Corona spy program. [8] [9] [10]

Casa Grande has also played a prominent role in semi-pro and collegiate baseball. The Casa Grande Cotton Kings, who were founded in 1948, qualified to play in the National Baseball Congress World Series ten straight times by winning Arizona state championships in the 1940s and 1950s, and were reactivated in the 2000s. They are now members of the Pacific Southwest Baseball League. [11]

According to the United States Census Bureau, Casa Grande has a total area of 48.2 square miles (125 km2), all of it land.

Casa Grande has a hot desert climate ( Köppen climate classification BWh), typical for the Sonoran Desert. The city experiences long, extremely hot summers and brief winters consisting of mild afternoons and chilly evenings. The area averages only 9.07 inches (230 millimeters) of rain per year. The coolest month on average is December, with highs averaging 68 °F (20 °C), and lows typically averaging around 37 °F (3 °C). The lowest temperature ever recorded in Casa Grande was 15 °F (−9 °C).[ when?] July is the warmest month of the year, with an average high of 107 °F (42 °C) and an average low of 76 °F (24 °C). The highest temperature ever recorded in the city was 122 °F (50 °C). Along with the rest of southern Arizona, the community is prone to dust storms and in the summer months is affected by the North American Monsoon, which brings high winds and heavy rain. [12] 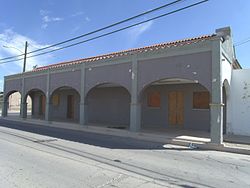 The historic Southern Pacific Railroad Depot was built in 1925 and is located at 201 W. Main St.

The economy of Casa Grande was historically based on rural, agricultural industries such as cotton and dairy farms. Over time, the city has become home to many Phoenix or Tucson urbanites who own homes in Casa Grande. Most residents either commute north to work in the Phoenix metropolitan area, or to the south, to work in Tucson. This trend has contributed to growth in the service industry of Casa Grande. Many new businesses such as restaurants, gas stations, and retail outlets are opening throughout the city in order to keep up with demand from the growing population.

A retail shopping mall operates in southern Casa Grande. Phase one of The Promenade at Casa Grande opened on November 16, 2007. Built by Westcor and the Pederson Group, it is similar to Desert Ridge Marketplace (an outdoor shopping center in northeast Phoenix). The Promenade at Casa Grande is an outdoor mall, built on a 100-acre (0.40 km2) patch of desert, and contains nearly a million square feet. An additional $11 million was spent by the city to fund the reconstruction of the Florence Blvd./I-10 freeway overpass.

Ehrmann Commonwealth Dairy operates a major dairy processing facility in the town that opened in 2013 and employs about 110 people. [15]

According to Casa Grande's 2014 Comprehensive Annual Financial Report, [20] the top employers in the city are:

The Casa Grande Public Library provides the standard services of access to reading materials, as well as some special services, including a volunteer reading club for elementary school, internet access, and a talking book program. The main library is 16,000 square feet (1,500 m2), provides 75,000 volumes, and provides 38 public access computers with internet access. The Vista Grande Public Library, a branch of the Casa Grande Library System, opened in the summer of 2009. [21] [22]

The following schools are located in Casa Grande.