The mission of the refuge system is "To administer a national network of lands and waters for the conservation, management, and where appropriate, restoration of fish, wildlife, and plant resources and their habitats within the United States for the benefit of the present and future generations of Americans" (National Wildlife Refuge System Improvement Act of 1997). The system maintains the biological integrity, diversity, and environmental health of these natural resources and enables for associated public enjoyment of these areas where compatible with conservation efforts.

National Wildlife Refuges manage a full range of habitat types, including wetlands, prairies, coastal and marine areas, and temperate, tundra, and boreal forests. The management of each habitat is a complex web of controlling or eradicating invasive species, using fire in a prescribed manner, assuring adequate water resources, and assessing external threats such as development or contamination.

Among these, hundreds of national refuges are home to some 700 species of birds, 220 species of mammals, 250 reptile and amphibian species, and more than 1000 species of fish. Endangered species are a priority of National Wildlife Refuges in that nearly 60 refuges have been established with the primary purpose of conserving 280 threatened or endangered species.

National Wildlife Refuges are also places where visitors can participate in a wide variety of outdoor recreational activities. The National Wildlife Refuge System welcomes nearly 50 million visitors each year. The system manages six wildlife-dependent recreational uses in accordance with the National Wildlife Refuge System Improvement Act of 1997, including hunting, fishing, birding, photography, environmental education, and environmental interpretation. Hunters visit more than 350 hunting programs on refuges and on about 36,000 waterfowl production areas. Opportunities for fresh or saltwater fishing are available at more than 340 refuges. At least one wildlife refuge is in each of the 50 states.

The National Wildlife Refuge System is dealing with such issues as urban intrusion/development, habitat fragmentation, degradation of water quantity and quality, climate change, invasive species, increasing demands for recreation, and increasing demands for energy development. [1] The system has had numerous successes, including providing a habitat for endangered species, migratory birds, plants, and numerous other valuable animals, implementation of the NWRS Improvement Act, acquisition and protection of key critical inholdings, and establishing leadership in habitat restoration and management.

The agency has created Comprehensive Conservation Plans (CCPs) for each refuge, developed through consultation with private and public stakeholders. These began a review process by stakeholders beginning in 2013. The CCPs must be consistent with the Fish and Wildlife Service (FWS) goals for conservation and wildlife management. [2] [3]

The CCPs outline conservation goals for each refuge for 15 years into the future, with the intent that they will be revised every 15 years thereafter. The comprehensive conservation planning process requires several phases, including a scoping phase, in which each refuge holds public meetings to identify the public’s main concerns; plan formulation, when refuge staff and FWS planners identify the key issues and refuge goals; writing the draft plan, in which wildlife and habitat alternatives are developed, and the plan is submitted for public review; revision of the draft plan, which takes into consideration the public’s input; and plan implementation. [4] [5]

Each CCP is required to comply with the National Environmental Policy Act (NEPA) and must contain several potential alternatives to habitat and wildlife management on the refuge, and identify their possible effects on the refuge. Additionally, NEPA requires FWS planners and refuge staff to engage the public in this planning process to assist them with identifying the most appropriate alternative. [2]

Completed CCPs are available to the public and can be found on the FWS website. [3] [4] 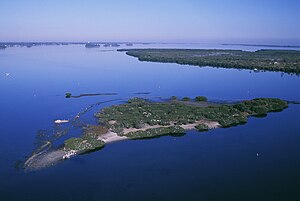 Pelican Island in Florida was the nation's first wildlife refuge, created in 1903.

Comprehensive wildlife and habitat management demands the integration of scientific information from several disciplines, including understanding ecological processes and monitoring status of fish, wildlife, and plants. Equally important is an intimate understanding of the social and economic drivers that impact and are affected by management decisions and can facilitate or impede implementation success. Service strategic habitat conservation planning, design, and delivery efforts are affected by the demographic, societal, and cultural changes of population growth and urbanization, as well as people’s attitudes and values toward wildlife. Consideration of these factors contributes to the success of the service’s mission to protect wildlife and their habitats.

The refuge system works collaboratively internally and externally to leverage resources and achieve effective conservation. It works with other federal agencies, state fish and wildlife agencies, tribes, nongovernmental organizations, local landowners, community volunteers, and other partners. Meaningful engagement with stakeholders at a regional, integrated level adds to the effective conservation achievements of the FWS and allows individual refuges to respond more effectively to challenges.

Wildlife and habitat management activities include:

Refuges attract nearly 50 million visitors each year who come to hunt, fish, observe, and photograph wildlife, and are a significant boon to local economies. According to the FWS's 2013 Banking on Nature Report, visitors to refuges positively impact the local economies. The report details that 47 million people who visited refuges that year:

The refuge system has a professional cadre of law enforcement officers that supports a broad spectrum of service programs by enforcing conservation laws established to protect the fish, wildlife, cultural, and archaeological resources the service manages in trust for the American people. They also educate the public about the FWS’s mission, contribute to environmental education and outreach, provide safety and security for the visiting public, assist local communities with law enforcement and natural disaster response and recovery through emergency management programs, and help protect native subsistence rights. They are routinely involved with the greater law enforcement community in cooperative efforts to combat the nation's drug problems, address border security issues, and aid in other security challenges.

Prevention and control of wildland fires is also a part of refuge management. Completion of controlled burns to reduce fuel loading, and participation in the interagency wildland fire suppression efforts, are vital for management of refuge lands.

A considerable infrastructure of physical structures is also essential to proper management of refuge lands. As of September 30, 2015, the refuges had 13,030 roads, bridges, and trails; 5,284 buildings; 8,007 water management structures; and 7,886 other structures such as visitor facility enhancements (hunting blinds, fishing piers, boat docks, observation decks, and information kiosks). The overall facility infrastructure is valued at nearly $30 billion.

The area of the refuge system is heavily influenced by large areas devoted to protecting wild Alaska and to protecting marine habitats in the Pacific Ocean; however, the number of units and public visitation overwhelmingly occurs in the lower 48 states, though these refuges and wetland management districts constitute only a little over 1% of the system.

In addition to refuge status, the "special" status of lands within individual refuges may be recognized by additional designations, either legislatively or administratively. Special designation may also occur through the actions of other legitimate agencies or organizations. The influence that special designations may have on the management of refuge lands and waters may vary considerably.

Special designation areas within the refuge system as of September 30, 2014, included: