Tempe ( /tɛmˈpiː/ tem-PEE; [4] Oidbaḍ in O'odham), is a city in Maricopa County, Arizona, United States, with the Census Bureau reporting a 2019 population of 195,805. [3] The city is named after the Vale of Tempe in Greece. Tempe is located in the East Valley section of metropolitan Phoenix; it is bordered by Phoenix and Guadalupe on the west, Scottsdale and the Salt River Pima–Maricopa Indian Community on the north, Chandler on the south, and Mesa on the east. Tempe is also the location of the main campus of Arizona State University. 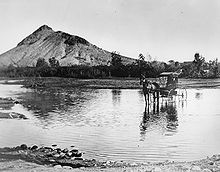 The Hohokam lived in this area and built canals to support their agriculture. They abandoned their settlements during the 15th century, with a few individuals and families remaining nearby.

Fort McDowell was established approximately 25 mi (40 km) northeast of present downtown Tempe on the upper Salt River in 1865 allowing for new towns to be built farther down the Salt River. US military service members and Hispanic workers were hired to grow food and animal feed to supply the fort, and less than a year later, had set up small camps near the river that were the first permanent communities in the Valley after the fall of the Hohokam. (Phoenix was settled shortly afterward, by 1867–68.) The two settlements were 'Hayden's Ferry', named after a ferry service operated by Charles T. Hayden, and ' San Pablo', and were located west and east of Hayden Butte respectively. The ferry became the key river crossing in the area. The Tempe Irrigating Canal Company was soon established by William Kirkland and James McKinney to provide water for alfalfa, wheat, barley, oats, and cotton.

Pioneer Darrell Duppa is credited with suggesting Tempe's name, adopted in 1879, after comparing the Salt River valley near a 300-foot (91 m)-tall butte, to the Vale of Tempe near Mount Olympus in Greece. [5]

Until the early 1960s, Tempe was a sundown town where African Americans were permitted to work but encouraged to live elsewhere. [6] In 1965, Warren and Carol Livingston were the first African Americans to buy property in Tempe. [7]

The Maricopa and Phoenix Railroad, built in 1887, crossed the Salt River at Tempe, linking the town to the nation's growing transportation system. The Tempe Land and Improvement Company was formed to sell lots in the booming town. Tempe became an economic hub for the surrounding agricultural area. The city incorporated in 1894.[ citation needed]

The completion of Roosevelt Dam in 1911 guaranteed enough water to meet the growing needs of Valley farmers. On his way to dedicate the dam, former President Theodore Roosevelt applauded the accomplishments of the people of central Arizona and predicted that their towns would be prosperous cities in the future. Less than a year later, Arizona was admitted as the 48th state, and the Salt River Valley continued to develop.[ citation needed]

In the 20th and 21st centuries, Tempe has expanded as a suburb of Phoenix, and as a center of education and commerce.

Tempe is an inner suburb, located between the core city of Phoenix and the rest of the East Valley. Due to this as well as being the home of the main campus of Arizona State University, Tempe has a fairly dense, urbanized development pattern in the northern part of the city with a growing skyline. Going south, development becomes less dense, consisting of single-family homes, strip malls and lower-density office parks.

Within Tempe are the Tempe Buttes. The Salt River runs west through the northern part of Tempe; part of the river is dammed in two places to create Tempe Town Lake.

Tempe is generally flat, except for Hayden Butte (generally known as A-Mountain for Arizona State University's "A" logo located on its south face), located next to Sun Devil Stadium, Twin Buttes and Bell Butte on the western edge of Tempe, and Papago Park northwest of Tempe, inside Phoenix. Elevation ranges from 1,140 feet (350 m) at Tempe Town Lake to 1,495 feet (456 m) atop Hayden Butte.

Tempe experiences a desert climate with a higher degree of diurnal temperature variation than neighboring Phoenix.

Tempe is the headquarters and executive office of one Fortune 500 company: Insight Enterprises. DriveTime, Carvana, Limelight Networks, [10] LifeLock, [11] First Solar, [12] [13] the Salt River Project, Circle K, Fulton Homes and Mobile Mini are also headquartered in Tempe. Cold Stone Creamery was originally headquartered in Tempe and location #0001 is still in operation today at 3330 S McClintock Drive in Tempe. Tempe prides itself in assisting burgeoning businesses and has a variety of resources and programs available, such as FABRiC (Fashion and Business Resource Innovation Center) and BRiC (Business Resource and Innovation Center). [14] Tempe is also home to the first and largest campus of Arizona State University. It was the longtime host of the Fiesta Bowl, although the BCS game moved to University of Phoenix Stadium, located in Glendale, in 2007. It then began hosting the Insight Bowl which is now known as the Cheez-It Bowl. As of 2018, there is no bowl game in Tempe because of renovations to Sun Devil Stadium. Edward Jones Investments and State Farm Insurance have regional headquarters in Tempe. [15]

Tempe houses several performance venues including Gammage Auditorium and the Tempe Center for the Arts.

One of Arizona's largest shopping malls, Arizona Mills, sits near the border with the town of Guadalupe. The city was the location of the first IKEA branch in Arizona, also near the southern boundary. Tempe Marketplace, a large open air mall featuring live music and water and laser shows, is located just southeast of Tempe Town Lake. Tempe can boast an array of wholesalers and manufacturers. Mill Avenue, located just west of Hayden Butte, is a shopping and entertainment area in the city popular with pedestrians and students. With the completion of Tempe Town Lake, commercial and high-rise development along the reservoir quickly transformed the cityscape of Mill Avenue and the skyline of downtown Tempe.

According to Tempe's Comprehensive Annual Financial Report for the financial year ending June 2019, [16] the top employers in the city are:

Tempe Center for the Arts (TCA)

Opened in September 2007, Tempe Center for the Arts (TCA) is a community crown jewel for performing and visual arts. The $65 million venue houses a state-of-the-art 600-seat theater, a 200-seat studio theater, a picturesque 200-seat multi-purpose space, a 3,500 square-foot art gallery. [17]

The Tempe Public Art Program coordinates artists with building designers to install permanent and temporary public art projects. Since 1988, more than 50 projects have been commissioned by the Tempe's Community Services Division. The Art in Private Development ordinance of 1991 has helped add more than 60 privately owned pieces of art to the city, accessible by the public. [18]

Tempe enjoyed a thriving alternative music scene throughout the 1980s and '90s, producing acts including as the Gin Blossoms, Meat Puppets, Dead Hot Workshop, The Refreshments, Roger Clyne and the Peacemakers, Hans Olson, The Maine, and Injury Reserve.

There are numerous properties in the city of Tempe which are considered to be historical and have been included either in the National Register of Historic Places. [24] 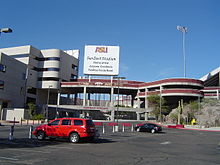 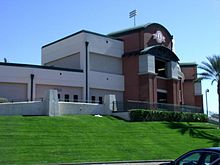 There are currently no major league professional sports teams playing in Tempe. However, from 1988 to 2005, Sun Devil Stadium hosted the Arizona Cardinals (named the Phoenix Cardinals from 1988 to 1993) of the National Football League. They have since moved to State Farm Stadium in Glendale for games, but maintain their headquarters and training facility in Tempe. Many residents follow the teams in nearby Phoenix and Glendale. (For more information, read the sports section on the Phoenix page) [25]

The Arizona State University Sun Devils compete in football, basketball, baseball, as well as a number of other sports in the Pac-12 Conference of the NCAA. The Sun Devils football team plays their games at Sun Devil Stadium. Their nearest rival is the University of Arizona Wildcats, in Tucson. The two teams compete in the "Duel in the Desert" for control of the Territorial Cup. The Sun Devil Stadium had hosted the annual Fiesta Bowl, until the 2007 game moved to the new University of Phoenix Stadium in Glendale.

The Arizona Hotshots of the Alliance of American Football played their one season in Tempe in early 2019. The league folded before the season was completed.

Rugby union is a developing sport in Tempe as well as in the Phoenix metropolitan area. The multiple clubs, ranging from men's and women's clubs to collegiate and Under 19, are part of the Arizona Rugby Union. [26] Notable clubs are Arizona State University Rugby Football Club and the Tempe "Old Devils" Rugby Club. [27]

Tempe is home to many outdoor activities. Tempe Town Lake is a publicly accessible lake that is run by City of Tempe. The lake provides recreation activities to residents and tourists, but also helps protect the surrounding area from flooding. The City of Tempe estimated that 2.7 million people visited the lake in 2013. [28] Papago and South Mountain Parks offer hiking, mountain and road biking, rock climbing, disc golf, and equestrian activities. In the downtown area of Tempe (at ASU campus) the 300 foot tall Tempe Butte hosts several hiking and cycling trails. Tempe is also home to the annual Ironman Triathlon, which takes place in late November.

Tempe also contains one of the state's three major universities, Arizona State University, the Maricopa County Community College District administrative offices and the headquarters of Rio Salado Community College. Arizona State University is known for its numerous studies and innovations, particularly in the field of science which include furthering the knowledge of certain cancers, business management research, and population science. [30] [31] [32] Tempe is also the home of several other schools, including the University of Phoenix, Brookline College, Southwest College of Naturopathic Medicine, Southwest Institute of Healing Arts, Bryan University and Lamson Junior College.

Tempe is one of the most densely populated cities in the state and serves as a crossroads for the area's largest communities.

Freeways make up the major transportation system for the Valley. Included in the system surrounding Tempe are Interstate 10 near the western edge as it traverses the Broadway Curve, Loop 202 crossing the northern side, Loop 101 following the eastern border, and U.S. Route 60 running east–west through the center of the city.

Valley Metro operates bus routes and the Valley Metro Rail system that serves Downtown Tempe and Arizona State University, providing service to Phoenix and Mesa. The City of Tempe operates a free neighborhood circulator service called Orbit involving five free shuttle routes near Arizona State University that operate on a regular basis seven days a week. [34] Three other FLASH (Free Local Area Shuttle) circulate in northern Tempe around the university. Tempe residents and commuters make extensive use of public transit and service is offered on a more frequent basis than elsewhere in the greater Phoenix valley, or in the entire state. Most Tempe buses offer 15 minute service during rush hour and 30 minute service throughout the rest of the day.

Phoenix-Mesa Gateway Airport is located in Mesa, and offers air service to many additional destinations.

Tempe was the location of the world's first reported killing of a pedestrian by a self-driving car on 19 March 2018. An Uber car under software control was driving at 38 mph on a 35 mph limit road when it collided with 49-year-old Elaine Herzberg who was crossing the road. [35]