Map of Colorado. The area of the Roosevelt National Forest is in red.

The forest encompasses a mountainous area of the foothills on the eastern side of the Continental Divide of the Front Range in Larimer County and Boulder County. In Larimer County it includes the upper valleys of the Cache la Poudre and Big Thompson Rivers. It includes forested areas along both sides of the Poudre Canyon and along the north and east sides of Rocky Mountain National Park. Smaller parts of the forest also extend into northern Gilpin and extreme northwestern Jefferson counties. 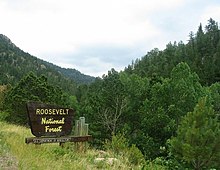 Several volunteer groups work with the US Forest Service to help manage the Roosevelt National Forest, including the Poudre Wilderness Volunteers.

There are six officially designated wilderness areas lying within Roosevelt National Forest that are part of the National Wilderness Preservation System. Four of them extend into neighboring National Forests, and one of these also onto National Park Service land (as indicated).