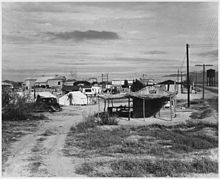 In 1877, Thomas Newt Clanton led a group of six men, three women, and ten children from Creston, Iowa, to Arizona, where they settled in the Buckeye area. [8]

Early settler Malie M. Jackson developed 10 miles (16 km) of the Buckeye Canal from 1884 to 1886, which he named after his home state of Ohio's moniker, "The Buckeye State". The town was founded in 1888 and originally named " Sidney", after Jackson's hometown in Ohio. However, because of the significance of the canal, the town became known as Buckeye. The name was legally changed to Buckeye in 1910. The town was incorporated in 1929, at which time it included 440 acres (180 ha). The town's first mayor was Hugh M. Watson (1956–1958), who founded the Buckeye Valley Bank. Today, Watson Road is the site of the city's commercial center. [9]

In 2008, Buckeye was featured on The NewsHour with Jim Lehrer as part of a week-long series entitled "Blueprint America." [10]

A vote to designate the town as the City of Buckeye became effective in 2014. [11]

In May 2019, population estimates released by the U.S. Census Bureau placed Buckeye as the fastest growing city in the United States by percentage from 2017–2018, growing by 8.5%. [12]

Sundance Towne Center, a shopping center developed by Vestar Development in the Sundance community, opened in 2007.

Buckeye has a hot desert climate ( Köppen BWh), with abundant sunshine due to the stable descending air of the eastern side of the subtropical anticyclone aloft and at sea level over the southwestern United States. Summers, as with most of the Sonoran Desert, are extremely hot, with 121.0 afternoons reaching 100 °F or 37.8 °C and 181.6 afternoons reaching 90 °F or 32.2 °C. The record high temperature of 128 °F (53.3 °C) occurred on July 28, 1995, and temperatures above 86 °F or 30 °C may occur in any month. Cooler weather may occasionally occur during summer, but such periods are no less unpleasant as they result from monsoonal weather, with its attendant higher cloudiness and humidity; however, actual rainfall from the monsoon is much more infrequent than in Flagstaff, Nogales or even Tucson. The heaviest daily rainfall has been 4.90 inches (124.5 mm) on September 2, 1894, but between 1971 and 2000 no month had more rainfall than 4.52 inches or 114.8 millimetres in December 1984.

The Buckeye Union High School A-Wing is listed on the National Register of Historic Places. [19]

A popular recreation destination in Buckeye is the Buckeye Hills Recreation Area. It is located 7 miles (11 km) south of downtown Buckeye on State Route 85, at mile marker 144. A 900-acre (3.6 km2) Buckeye Lake is planned.

The City of Buckeye's Skyline Regional Park is an 8,700 acres (3,500 ha) mountain preserve located in the southern White Tank Mountains. As of August 2020, the park features just under 20 miles (32 km) of trails for hikers, mountain bikers and equestrians, picnic areas and camping. Entry to the park is free. [20]

The City of Buckeye is served by the following school districts:

There are several local newspapers, including the West Valley View, The Arizona Republic's Southwest Valley edition and the Buckeye Valley News. [22]

Buckeye is served by five highways, a municipal airport, several nearby airports, and the railroad. [23]

Major roadways serving the city include:

In 1910, the Arizona Eastern Railroad came to Buckeye; the first car in 1911; a steam rail line connected it to Phoenix by 1912; and a state highway by 1915. The coming of the railroad was so significant that the business district was moved to accommodate the location of the railroad station. As a result, Buckeye was booming. By 1912, major buildings were constructed, along with expansion of the business community. [9]

Union Pacific operates a rail line running east–west generally through the center of the city. [25]

The Buckeye Municipal Airport ( ICAO identifier KBXK) is owned and operated by the city government. [26] [27]