From Wikipedia, the free encyclopedia
For the university, see Northern Arizona University. 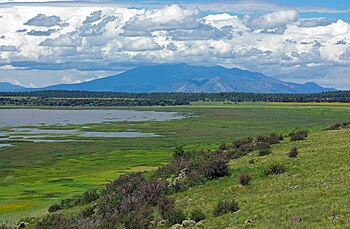 Northern Arizona is an unofficial, colloquially-defined region of the U.S. state of Arizona. Generally consisting of Apache, Coconino, Mohave, and Navajo counties, the region is geographically dominated by the Colorado Plateau, the southern border of which in Arizona is called the Mogollon Rim.[ citation needed]

Flagstaff is the largest city in Northern Arizona. Other cities include Prescott, Sedona, Page, and Williams.

Much of the territory is National Forest Service land, parkland, or other BLM-administered lands. In the north-east are large Hopi and Navajo reservations, parts of which overlap, leading to occasional territorial disputes.[ citation needed] Native Americans make up the average of 48% of the population in Coconino County, Navajo County, and Apache County. Ruins of the ancient Anasazi, Sinagua, and other Puebloan people can be found in Northern Arizona.

The region features several mountain ranges, including the state's highest, the San Francisco Peaks. It also contains most of the state's natural lakes. In the east lies the White Mountain range. The Grand Canyon is in the west. The central portion of Northern Arizona has the Painted Desert.

The area is known for its rugged landscape and variety of environment. Northern Arizona is home to millions of acres of Ponderosa Pine, Aspen, and mixed-conifer forests, including the largest Ponderosa Pine forest in North America. Attractions in addition to the Grand Canyon include Monument Valley, Canyon de Chelly, the Painted Desert, and Meteor Crater. The major highway is Interstate 40 (roughly following the historic Route 66) which connects the larger cities of this region. Northern Arizona also goes by the name Alta Arizona, which means "Upper Arizona" in Spanish. Northern Arizona has a large Mormon population, with a temple in Snowflake.[ citation needed]

Northern Arizona has various points of interest. The area is known for its variety of outdoor recreation opportunities, hiking trails and forest service roads, extreme topographical and environmental variability, and its geologic and human history. The following is a list of popular natural and man-made attractions in Northern Arizona. [1]