The county borders three states: Sonora, Mexico, to the south, and two other states to the west, across the Colorado River: California of the United States and the Mexican state of Baja California.

Long settled by Native Americans of indigenous cultures for thousands of years, this area was controlled by the Spanish Empire in the colonial era. In the 19th century, it was part of independent Mexico before the Mexican–American War and Gadsden Purchase.

Yuma County was one of four original Arizona counties created by the 1st Arizona Territorial Legislature.[ citation needed] The county territory was defined as being west of longitude 113° 20' and south of the Bill Williams River. [3] Its original boundaries remained the same until 1982, when La Paz County was created from its northern half.

Agriculture is a $3 billion business annually, employing tens of thousands of workers but at minimum wages. During the winter agricultural season from November to March, some 40,000 Mexican workers cross the border daily to work in United States fields. [5] The area is watered by the Colorado River, and the sector supplies a large part of the US leafy vegetables. [6] [7] The Yuma Lettuce Days festival and agritourism is connected to Yuma agriculture.

Leaders in the county are aware their economy is tied to that of Mexican states on the other side of the border; both have to be considered. "There are automotive plants in Ciudad Juárez, across from El Paso; aerospace plants in Mexicali, southwest of Yuma; and medical devices’ manufacturers in Tijuana, near San Diego. On the American side, there is a mix of retail stores, warehouses and trucking companies..." [5]

Because of Yuma County's location along the U.S.-Mexico border, large numbers of aliens entering the United States illegally pass through Yuma County. From October 2004 to July 2005, some 124,400 illegal foreign nationals were apprehended in the area, a 46% increase over the previous year. [8] In 2015, however, only 6,000 people were apprehended, as the border was fortified and augmented.[ citation needed] The number of illegal immigrants also declined with slumps in the US economy. [5]

The Board of Supervisors is the governing body of the county and a number of special districts. The board has members from five districts. [9] The Board adopts ordinances, establishes programs, levies taxes, appropriates funds, appoints certain officials, and zones property and regulates development in the unincorporated area. In addition, members of the Board represent the County on numerous intergovernmental agencies. [10]

In 2016 county voters elected more Democrats to the Board than Republicans, for the first time since 2004. [11] In Arizona's first 52 years as a state, Yuma County was a primarily Democratic county, only voting for Republicans four times in presidential elections prior to 1968. From 1968 on, it has consistently voted for Republican presidential candidates. However, their margins of victory have been reduced in recent years as the county has rapidly grown in population & become majority-Hispanic. Donald Trump only won the county by 560 votes over Hillary Clinton in the most recent presidential election of 2016.

Yuma County is in the west, and northwestern regions of the north-south Sonoran Desert that extends through Sonora state Mexico to the border of northern Sinaloa state. West of the county across the Colorado River in southeast California is the Colorado Desert, (a northwestern subregion of the Sonoran Desert). North of the county, with La Paz County the regions merge into the southeastern Mojave Desert. Southwest of Yuma County, is the entirety of Northwest Mexico, at the north shoreline of the Gulf of California, and the outlet of the Colorado River into the Colorado River Delta region, now altered with lack of freshwater inputs. Notable mountains in Yuma County include the Gila Mountains and the Tule Mountains. 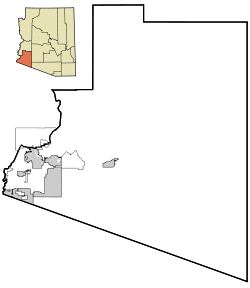 Map of Yuma County showing incorporated and unincorporated areas as well as Indian reservations in the county.