Surprise is a city in Maricopa County, in the U.S. state of Arizona. The population was 30,848 at the 2000 census; however, rapid expansion has boosted the city's population to 117,517 at the 2010 census, an increase of 281%. [2] As such, it is the second-fastest-expanding municipality in the greater Phoenix metropolitan area (after Gilbert) and, between 1990 and 2000, it was the sixth-fastest-expanding place among all cities and towns in Arizona. Census estimates in 2019 continue this accelerated growth pattern, with the population now estimated at 141,664. [4]

The city was founded in 1938 by Flora Mae Statler, who named it Surprise as she "would be surprised if the town ever amounted to much". [5] Surprise officials previously thought the city was founded by Statler's husband, real estate developer and state legislator Homer C. Ludden, but in 2010 property records were discovered which listed Statler owning the land before she met Ludden. [6]

Although there were only a few houses and a gas station on the one-square-mile (1.6 km) parcel of land when it was subdivided to build inexpensive houses for agricultural workers, Surprise has experienced tremendous growth in the years since. [7] It incorporated into a city in 1960, the townsite being bounded by Greenway Road on the south, El Mirage Road on the east, Bell Road on the north, and Dysart Road on the west. [8] City Hall is located on the site of one of Luke Air Force Base's former auxiliary airfields. [9]

Tens of thousands of retirees moved to the city in the 1990s and early 2000s to live in Sun City Grand, an age-restricted resort-like community, with homes built by the property development firm Del Webb. Surprise is about five miles (8 km) northwest of Del Webb's original Sun City development and adjacent to Sun City West.

Surprise is about 20 miles (32 km) northwest of Phoenix.

There were 12,484 households, out of which 21.5% had children under the age of 18 living with them, 69.5% were married couples living together, 5.4% had a female householder with no husband present, and 22.1% were non-families. 17.9% of all households were made up of individuals, and 8.9% had someone living alone who was 65 years of age or older. The average household size was 2.46 and the average family size was 2.75 people.

According to the City's 2016 Comprehensive Annual Financial Report, [12] the top employers in the city are:

The city is the spring training home of the Kansas City Royals and the Texas Rangers baseball teams. These Major League Baseball teams use Surprise Stadium for their activities. The city also hosted a Golden Baseball League team in 2005, the Surprise Fightin' Falcons and the Recreation Campus ballpark and is the home city for a team in the Arizona Fall League, the Surprise Saguaros. It also hosted ESPN SportsCenter's 50 States in 50 Days segment on August 11, 2005.

As part of the city's Recreation Campus, Surprise is also home to the Surprise Tennis and Racquet Complex (STRC). [13] Since its opening in August 2007, the complex has received numerous awards, including being named the 2008 Outstanding Facility of the year award by the USTA. The complex hosts various professional events throughout the year, including the Outback Champion Series tour, a USTA Pro Circuit event, and many USTA regional and sectional events. In 2009 the complex was chosen as the site for the Fed Cup Quarter Final between the U.S. and Argentina.

Surprise is governed on the local level by a mayor and a six-member city council. [14] The mayor is elected at large, while the council members are elected from the six districts which they represent. All city council elections are officially nonpartisan. All representatives serve four-year terms. The current mayor is Skip Hall.

The local government website earned a "Sunny Award" for the proactive disclosure of government data from Sunshine Review. [15]

The Dysart Unified School District serves the city of Surprise. [16] Arizona Charter Academy is also located in the area.

Ottawa University-Arizona is a private, non-profit, Christian four-year university with a campus in Surprise's Civic Center Campus. Opened in Fall 2017, the University has grown from 300 students to nearly 900 students in Fall 2019 and boasts over 20 varsity level athletic teams. In 2019, OUAZ opened a 76,000 sf dormitory with 308 beds as well as a 26,000 sf student union with a fully equipped kitchen and dining facility, student lounge, team shop, conference areas and board room as well as the 35,000 sf, three-story O'Dell Center for Athletics.

Surprise is served by the following utilities: 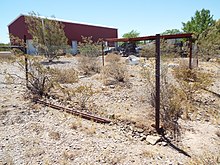 The Mission Home Cemetery, also known as the Sleeping Bride Cemetery, is a historic cemetery located in Surprise. [18]