The city is home to the Goodyear Ballpark, where the Cleveland Indians and Cincinnati Reds of Major League Baseball hold spring training.

In 2008, Goodyear won the All-America City Award, sponsored by the National Civic League. The city is named after the Goodyear Tire and Rubber Company. The company cultivated extensive farmland here to grow cotton for use in their tires.

Goodyear was established in 1917 with the purchase of 16,000 acres (65 km2) of land by the Goodyear Tire and Rubber Company to cultivate cotton for vehicle tire cords. World War II was important to Goodyear in the 1940s as the current Phoenix Goodyear Airport was built, but after the war, the economy suffered. Goodyear became a town on November 19, 1946. [5] At the time, it had 151 homes and 250 apartments, a grocery store, a barber shop, beauty shop and a gas station.

Luke Field Auxiliary #6 (Goodyear Field) was built by the United States Army Air Forces in 1943. It served as a satellite airfield for Luke Army Air Field (AAF) . According to the History of Luke AFB, this airfield boasted the most facilities. It had separate buildings for crew chiefs, operations, supply, barracks, pit latrine, crash truck shed, generator shed and a control tower. Luke AF Auxiliary #6 ceased operations by 1971. [6]

The property, which is in a state of complete abandonment, is owned by the State of Arizona, which has worked with developers on proposals for use. [6]

In January 1965, the Phoenix Trotting Park, a harness racing track opened, the current Interstate 10 passes north of the site. As the region lacked major roads from Phoenix to Goodyear, there was not enough business and the track closed two years later. The Park no longer stands, as it was demolished in 2017. The park had been abandoned since the late 1960s.

The town became a city in 1985. In the same decade, the remaining 10,000 acres (40 km2) of the original farmland was sold for future development. The Phoenix Goodyear Airport received its current name in 1986. [7]

South Lake Park in Estrella, on the southern end of Goodyear.

Although Goodyear was founded in 1917, the majority of construction and population growth happened after 1990. 22 communities that are completed and under construction have a total area of approximately 20,000 acres (31 sq mi). These communities, along with another 21 communities for future suburban development, will contain almost 200,000 homes, with only 25,000 built. [8]

Goodyear was affected by the 2000s American housing bubble, reducing home values. Since then, the housing market has rebounded considerably. According to Opendoor, zip code 85338 in Goodyear was the fifth most popular place in the Phoenix metro area to buy a home, based on home sales. There are also a variety of home options in 2019 to accommodate families, those who are single, and seniors. As the population in Goodyear grows faster than ever, home builders and community developers are working quickly to keep up with the demand.

Estrella is the largest community in Goodyear, at 20,000 acres (31 sq mi). The community is home to about 10,000 residents. Palm Valley, located north of Interstate 10, is 9,000 acres (14 sq mi), with variously-sized homes. PebbleCreek is a community for active adult living, with 54 holes of championship golf, fitness centers, and restaurants.

From the 1990s through the 2010s, residential development has stimulated the growth of Goodyear as a suburb of Phoenix. Goodyear's population is projected to be 358,000 by 2035. [9]

According to the United States Census Bureau, the city has a total area of 116.5 square miles (302 km2), all of it land. The Gila River passes through the city. The largest master planned community is Estrella, south of the Gila River, located near the Estrella Mountains. [11]

Goodyear has a subtropical desert climate ( Köppen: BWh) due to its location in the Sonoran Desert. The city receives somewhere around ten inches of rain annually. The city has more than 300 sunny days per year.

Snow is rare in the area, occurring once every several years. Lows in the winter occasionally dip below freezing, which may damage some desert plants such as saguaros and other cacti. In the summer (mainly July, August and early September), the North American Monsoon can hit the Phoenix area in the afternoon and evening (possibly continuing overnight), causing thunderstorms and heavy rain even from a sunny morning. Dust storms are occasional, mainly during the summer.

There were 6,179 households, out of which 32.7% had children under the age of 18 living with them, 71.1% were married couples living together, 6.4% had a female householder with no husband present, and 19.3% were non-families. 14.1% of all households were made up of individuals, and 3.7% had someone living alone who was 65 years of age or older. The average household size was 2.68 and the average family size was 2.94.

Goodyear has a council-manager form of government. The current mayor is Georgia Lord, who was elected to fill a two-year unexpired term as Mayor of the City of Goodyear in March 2011, was re-elected to serve a second term as Mayor in 2013, and was elected to serve her final term in 2017. The mayor has a two-term limit. The vice mayor of the city is Wally Campbell, who was first elected in 2011. There are six councilmembers, with three-term limits. [16]

The Arizona Department of Corrections operates the Arizona State Prison Complex-Perryville in Goodyear. [17] The prison houses the female death row. [18]

Franklin Pierce University has had a campus here since 2008, when the New Hampshire-based university signed a lease with the city to purchase 30 acres (120,000 m2) of land. [23] It offers a Doctor of Physical Therapy program and other health-care related programs. [24] 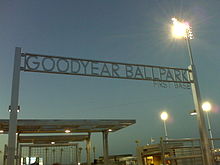 Goodyear is known as a site for professional baseball teams' spring training sessions. The Cleveland Indians of Major League Baseball's American League moved their spring training facility to Goodyear from Winter Haven, Florida and rejoined the Cactus League in February 2009, after a 15-year absence. Before that, the Indians held spring training for many years in Tucson.

On April 7, 2008, Goodyear's city council unanimously approved a memorandum to fund a new $33 million baseball spring training complex for Major League Baseball's Cincinnati Reds and Cleveland Indians. This includes a 10,000-seat park, Goodyear Ballpark, that opened in 2009. The Reds and the Indians have separate offices, clubhouses and practice fields. The Indians had held their spring training in Tucson for many years until moving to Winter Haven in 1993. They agreed in 2006 to return their spring training location to Arizona at Goodyear.

Phoenix Goodyear Airport is located here. It has an 8,500 ft runway capable of handling large jet aircraft. This airport, used by many international airlines for aircraft maintenance and storage, has no active commercial air service.

Union Pacific operates a railroad that goes through Goodyear. Rail lines provide Goodyear with access to 23 states in the western two-thirds of the United States.

Interstate 10 goes through Goodyear, heading west to Buckeye and Los Angeles. I-10 heads east to Phoenix, Tucson, and the Southern states.

The city is also served by the western ends of several bus routes of the Valley Metro Bus. [25]

Other roads and highways serve the area. Loop 303 starts as Cotton Lane then heads up north to Surprise and then to Interstate 17. Van Buren Street, McDowell, Indian School and Camelback Roads are major arterial roads leading from the extreme western Phoenix area to past Scottsdale, in the east. MC 85 (Maricopa County Highway 85) is a highway running from Arizona State Route 85 in Buckeye to central Phoenix. The highway passes the southern sections of Goodyear.

Interstate 10 was built through Goodyear in the late 20th century. Between 2008 and 2014, the road had significant expansions. It was expanded from 2 lanes in each direction to 5 or 6 (including one HOV lane starting near Loop 303 going east). There were also new interchanges, including Exit 122 (Perryville Road), Exit 123 (Citrus Road) and Exit 125 (Sarival Avenue).

This gallery includes photos of the following:

Historic structures in state of abandonment and deterioration 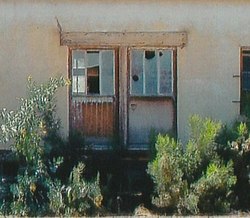 The deterioting condition of the Litchfield Train Station, now in the town of Goodyear