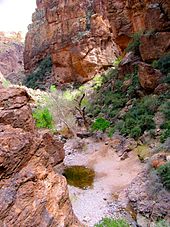 A pool of water, a remnant of the last rains, in a dry wash in Tonto National Forest

The boundaries of the Tonto National Forest are the Phoenix metropolitan area to the south, the Mogollon Rim to the north and the San Carlos and Fort Apache Indian Reservation to the east. The Tonto ( Spanish for "dumb") is managed by the USDA Forest Service and its headquarters are in Phoenix. There are local ranger district offices in Globe, Mesa, Payson, Roosevelt, Scottsdale, and Young. [3]

The next four are created by the Salt River chain of dams:

There are eight federally designated wilderness areas within (or partially within) the Tonto National Forest: [6]

A portion of the Verde Wild and Scenic River also lies within the forest.

A land swap proposed as a part of the 2015 National Defense Authorization Act would permit a subsidiary of the Rio Tinto mining conglomerate, Resolution Copper Co., to acquire 2,422 acres of the Tonto National Forest, considered sacred by the San Carlos Apache Tribe, for purposes of copper mining. This proposal, in Section 3003, titled "Southeast Arizona Land Exchange", is strongly opposed by many Native Americans, including the 57 member tribes of The Affiliated Tribes of Northwest Indians, and by the Great Plains Tribal Chairmen's Association. [8]