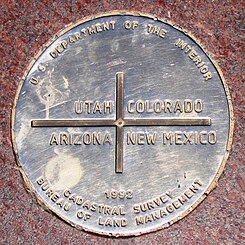 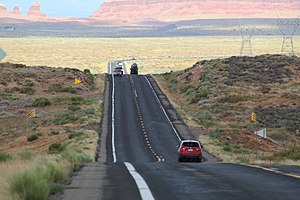 Most of the county forms part of the Navajo Nation and the Fort Apache Indian Reservation, respectively.

Apache County was formed during the Tenth Territorial Legislation in 1879 out of the eastern section of Yavapai County; officially all land east of 109°45′ W. By 1895, Navajo County and parts of Graham, Greenlee and Gila Counties were formed from this land. The county seat was placed in the town of Snowflake, but was moved a year later to St. Johns. From 1880 to 1882, the county seat was temporarily in Springerville before being returned to St. Johns. [3]

A history of the area, written in 1896, records the following about the county:

Apache County was created in 1879 and lies in the northeastern corner of the Territory. Until March, 1895, it also embraced what is now Navajo County, but at that date the latter was set apart and established as a separate county. Apache County is justly noted for its great natural resources and advantages. It is destined some day in the early future to have a large agricultural population. Now, immense herds of cattle and flocks of sheep roam over its broad mesas and its fertile valleys. The Navajo Indians occupy the northern part of the county-in fact, occupy much of the remainder of the county, as they refuse to remain on their reservation, preferring to drive their sheep and cattle on lands outside their reservation, where the grazing is better. The southern part is a fine grazing country, while the northern part is cut up into picturesque gorges and canyons by the floods of past centuries. [4]

In the late 1880s, the county sheriff was Commodore Perry Owens, an Old West gunfighter legend. At that time, the county covered more than 21,177 square miles (54,850 km2) in territory. In September 1887, near Holbrook in what is now Navajo County, Owens was involved in one of the Old West's most famous gunfights, when he killed three men and wounded a fourth while serving a warrant on outlaw Andy Blevins/Andy Cooper, an active participant in a raging range war, later dubbed the Pleasant Valley War.

The Fort Apache Indian Reservation occupies part of the county.

Apache County is one of two U.S. counties (the other being Wayne County, West Virginia) to border two counties of the same name, neither of which is in the same state as the county itself ( San Juan County, Utah and San Juan County, New Mexico).

Apache County has the most land designated as Indian reservation of any county in the United States. ( Coconino County and Navajo County are a close second and third.) The county has 19,857.34 km2 (7,666.96 sq mi) of reservation territory, or 68.34 percent of its total area. The reservations are, in descending order of area within the county, the Navajo Nation, the Fort Apache Indian Reservation, and the Zuni Indian Reservation, all of which are partly located within the county.

Apache County is one of only 38 county-level census divisions of the United States where the most spoken language is not English and one of only 3 where it is neither English nor Spanish. 58.32% of the population speak Navajo at home, followed by English at 38.34% and Spanish at 2.72%. [2]

The largest ancestry groups were: [16]

Owing to its strongly Native American population, Apache County votes solidly Democratic. No Republican presidential nominee has won Apache County since Ronald Reagan in 1980, [18] during an election when incumbent Jimmy Carter was viewed as extremely weak on issues pertaining to the West, especially water development. [19] During most of the 1980s, 1990s and early 2000s Apache was the most Democratic county in Arizona, although concern about Republican immigration policies has led Santa Cruz County to take this title since 2008.

In addition several other schools, including charter schools and tribal schools operated by the U.S. Bureau of Indian Affairs's Office of Education Programs, serve the county.

The following public use airports are located in Apache County: 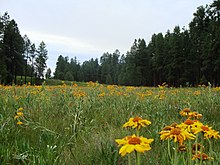 Wildflower meadow in the Apache-Sitgreaves National Forest, near Alpine. 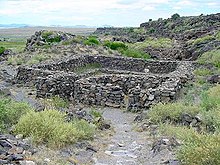 Kiva at Casa Malpais, near Springerville.

The population ranking of the following table is based on the 2010 census of Apache County. [30] [31]