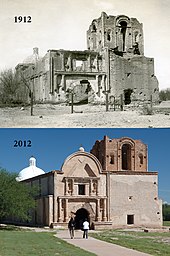 The Mission San José de Tumacácori complex is open to the public. Nearby are the park's visitor center and the Tumacácori Museum in a historic Mission Revival style building. The Guevavi and Calabazas missions are not open to the general public, but can be visited on reserved tours led by park staff. 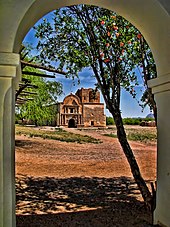 Mission San José de Tumacácori was established in 1691 by Jesuit padre Eusebio Kino in a different nearby location. It was established one day before Mission Los Santos Ángeles de Guevavi, making it the oldest Jesuit mission site in southern Arizona. The first mission was named Mission San Cayetano de Tumacácori, established at an existing native O'odham or Sobaipuri settlement on the east side of the Santa Cruz River.

After the Pima rebellion of 1751, the mission was moved to the present site on the west side of the Santa Cruz River and renamed San José de Tumacácori. [6] By 1848, the mission was abandoned and began falling into severe disrepair. In 1854 it became a part of the U.S. Arizona Territory, after the Gadsden Purchase.

Tumacácori Museum was built in 1937 within what was then Tumacácori National Monument and is now Tumacácori National Historical Park. Designed by Scofield Delong, it contains interpretative displays relating to three historic missions preserved within the park, [9] and includes artwork created by artist Herbert A. Collins. [10]

The museum building, a fine example of Mission Revival style architecture, with Spanish Colonial Revival details, was declared a National Historic Landmark in 1987. [8] [11] [12] [13]

Movies with scenes filmed in the park include: