From Wikipedia, the free encyclopedia
Part of Arizona north of the Colorado River 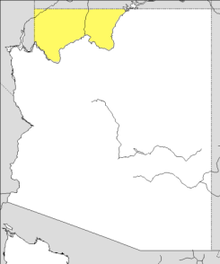 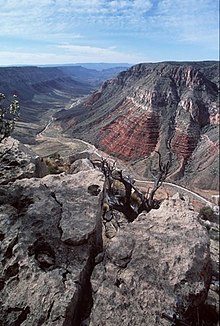 Side canyon in the Arizona Strip

The Wave, Arizona: a sandstone formation in the Arizona Strip

The Arizona Strip is the part of Arizona lying north of the Colorado River. The difficulty of crossing the Grand Canyon causes this region to have more physical and cultural connections with southern Utah and Nevada than with the rest of Arizona. The largest settlements in the Strip are Colorado City and Fredonia.

The Strip is very typical of the American West in its red-rock canyon country, and the aridity of the climate, which leads to the predominance of sagebrush vegetation. However, the first European settlers were witness to great stretches of grassland in such areas as House Rock Valley which are returning under better ranching practices. The land is also dotted with juniper trees, moving into pinyon pine and juniper forests, and eventually ponderosa pines, spruce, firs, and aspen in the higher elevations such as the Kaibab Plateau.[ citation needed]

It has been divided between Coconino County in the east (east of Kanab Creek) and Mohave County in the west. The only significant settlements are Fredonia on Kanab Creek and Colorado City (the Strip's largest community) on the Utah border to the northwest (see also Hildale, Utah). In the extreme west on the Virgin River are the small settlements of Beaver Dam, Littlefield and Scenic, just off Interstate 15. However, the Strip provides the only route accessing the North Rim of the Grand Canyon, and numerous service communities catering to tourists exist along the Strip's main routes heading south from Jacob Lake.[ citation needed]

Since the area was first settled by Mormon Pioneers led by Jacob Hamblin in the mid-19th century, the Arizona Strip has been one of the last strongholds of the nineteenth-century practice of polygamy, though this practice was officially disavowed by The Church of Jesus Christ of Latter-day Saints (LDS Church) in 1890. Over the last century the region has been the subject of controversy because of the control groups such as the United Effort Plan, a polygamist Mormon offshoot, exert within the region; nonetheless, such groups remain merely a visible minority.

The Arizona Strip was long a cattleman's paradise with large stretches of grassy meadow in the valleys and the high Kaibab Plateau as summer forage. At the beginning of the 20th century the Grand Canyon Cattle Company, otherwise known as the Bar Z Brand, ran upwards of 100,000 cattle throughout the strip. Land and water use often led to friction between competing brands, and there are accounts of limited range wars between different outfits and between sheepmen and cattlemen.

The strip had been a battleground between Native American and white settlers during the 19th century, with Navajo parties crossing over the Colorado River and raiding Mormon settlements. Peace was largely maintained through the diplomatic efforts of Jacob Hamblin. It also served as the primary route from Utah into Arizona, as the Grand Canyon and the Colorado River serve as almost impenetrable barriers to the south.

The Arizona Strip is very sparsely populated and connected to the rest of Arizona by only limited highway links, at Navajo Bridge and the Glen Canyon Dam bridge, both at the eastern end on U.S. Route 89 and crossing the Colorado River, a few Arizona state highways and U.S. Route 89A at Fredonia, Arizona. It does have multiple road links to Utah to the north; as a result, the region has stronger historic, economic and cultural ties to Utah than to Arizona. Residents of Littlefield, Arizona, and the surrounding northwest corner of the state, near Interstate 15, must physically leave the state and reenter from Utah, Nevada, or California.

Four primary unpaved roads enter the core of the strip: from Mesquite, Nevada; St. George, Utah; Colorado City, Arizona; and Fredonia, Arizona. All four are dirt/gravel and should not be driven by vehicles with low ground clearance. Motorists should check with the BLM locally before heading into the strip on these roads, and are advised to be prepared – even rangers may not know current conditions, such as snow/ice cover and washouts.

Cabin on the historic Kane Ranch, a conservation project of the Grand Canyon Trust.

Most of the land in the Arizona Strip is managed by the United States Bureau of Land Management or the United States Forest Service. The area holds several U.S. Wilderness Areas and U.S. National Monuments and the Kaibab Indian Reservation. The southern part of the Arizona Strip includes the north rim of Grand Canyon National Park and the northern section of the Lake Mead National Recreation Area.